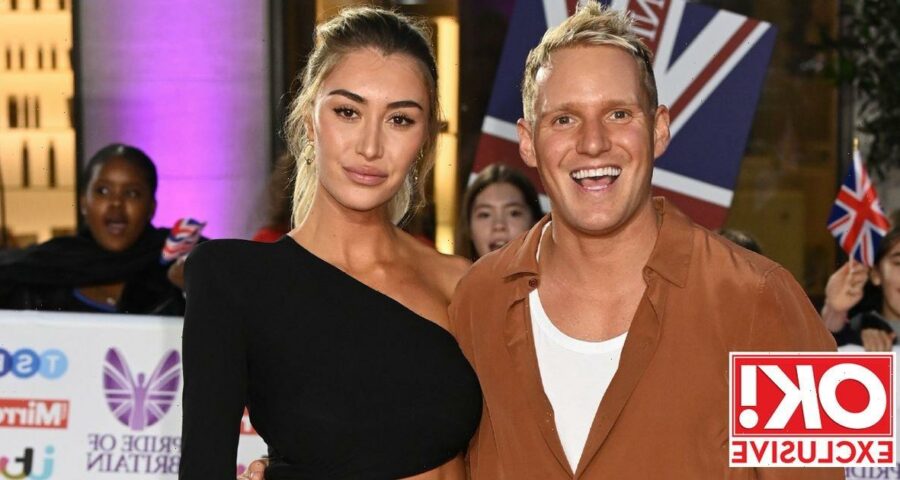 Husband-and-wife-to-be Jamie Laing and Sophie Habboo sent Made in Chelsea fans into a frenzy earlier this year when the pals-turned-lovebirds announced their engagement.

And though their big day is finally on the horizon, the pair have warned OK! readers 'Don't do it!' as they prepare the final details of the swanky soirée.

Speaking on the Pride of Britain Awards last night, Jamie, 33, teased: "Wedding plans are going badly. We're getting a divorce. We actually hate each other. No, of course, I'm kidding!"

The reality favourite added: "It's just really hectic and my advice for anybody getting married is, 'Don't do it'. Stay single!"

Jamie's fiancé Sophie, 30 – otherwise known as Habbs – also issued a word of warning about preparing to say 'I do'.

"It's honestly so stressful, no, seriously, do not get married," the blonde bombshell laughed. "We've got a date and a venue, so we're getting there. It's not been fun though."

Sophie – who also revealed that she has already selected her sister Georgia to be her Maid of Honour – jestingly noted: "People keep telling me there's a time that it's going to get fun, but it's not happened yet. Maybe nearer to the time.

"But my god, honestly, I wish we'd never bothered!"

Speaking earlier this week on the latest episode of their Nearlyweds podcast, Jamie opened up again on feeling they have a lot on their plate with regards to things left to plan.

Ex-Strictly Come Dancing contestant Jamie also admitted he was feeling "hungover" after a week of drinking.

"I went and had a couple of drinks on Saturday. You know this, and I'm still a little bit hungover today," he began to tell his listeners.

Sophie, 29, then reminded her fiancé that "it wasn't just Saturday", referring to him as a "straight shooter boy."

Jamie then corrected himself, admitting "Ok, well maybe I had some drinks on Friday as well," before Sophie called him out: "Not just Friday, straight shooter boy."

Again, Jamie added: "Maybe I had some drinks Thursday as well," before Sophie corrected the star for the third time: "Not just Thursday…"

The star – who previously had to deny she was pregnant – went on to confess: "Alright, maybe on Monday as well. Listen, why do you think I'm drinking so much?

"Probably to suppress all the feelings I have. That's probably what it is. Do you feel a bit like that? Maybe I'm full of anxiety!"

Sophie continued: "Haha, I know you are," to which Jamie added, "Instead of thinking, 'Oh, maybe my fiance is upset.' You're just thinking, 'He's a big drinker.'"

Habbs then told Jamie: "You're basically saying you're an alcoholic and suppressing your emotions with alcohol. That's a worry. What's in that coffee cup?"

Jamie – who previously recalled the time a cleaner found one of his and Sophie's sex toys – quickly disclosed, "Whiskey," before Sophie hit back: "That's not funny."

But one thing that the pair are looking optimistically towards is their honeymoon, with Jamie exclusively revealing that he's asked a particular Made In Chelsea co-star for a helping hand.

"My great friend Spencer [Matthews], his family own a hotel and I asked for a freebie – and he said no!" Jamie explains.

"I'm kidding – although he hasn't said yes yet, so I'm hoping to get a response soon. I'll send Mrs Matthews [Vogue Williams] a really lovely letter."