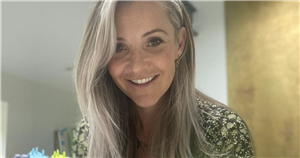 Helen Skelton shared a sweet photo of her snuggling up to her baby daughter on Instagram.

Taking to her page on Sunday, the 38 year old presenter could be seen leaning over to kiss her youngest child, who grins as she’s snuggled up in her pram.

She added the caption: “All the snogs for your baby girl #babygirl #weekend.”

The adorable photo comes a day after she returned to her rugby presenting role on Channel 4 for the first time since her split from husband Richie Myler.

In a short statement released at the time, the TV presenter confirmed on social media: "Very sad to say Richie and I are no longer a couple. He has left the family home. We will be doing our best to co-parent our small children."

Helen, who is best known for presenting Countryfile, returned to screens on Saturday 14 May as she hosted coverage of a Hull KR V Catalan Dragons rugby league match on Channel 4.

Leading the coverage in the absence of presenter Adam Hills, who is currently in Australia, Helen was dressed in a chic black blazer.

The presenter styled her blonde locks into a blow-dried hairdo and added a slick of radiant makeup.

Viewers were quick to applaud her return, with one writing: "@HelenSkelton fantastic today, welcome back to Rugby League well done."

Another said: "@HelenSkelton great presenting on C4, you are amazing xxxxx."

Since the split, Richie is reported to have moved on with the boss of his rugby club.

Richie plays rugby for the Leeds Rhinos club, of which the president is Andrew Thirkill, who is estimated to be worth £175million.

Only recently, Helen's fans flooded her Instagram page with messages of support after she shared a smiling selfie.

Get exclusive celebrity stories and fabulous photoshoots straight to your inbox with OK!'s daily newsletter.