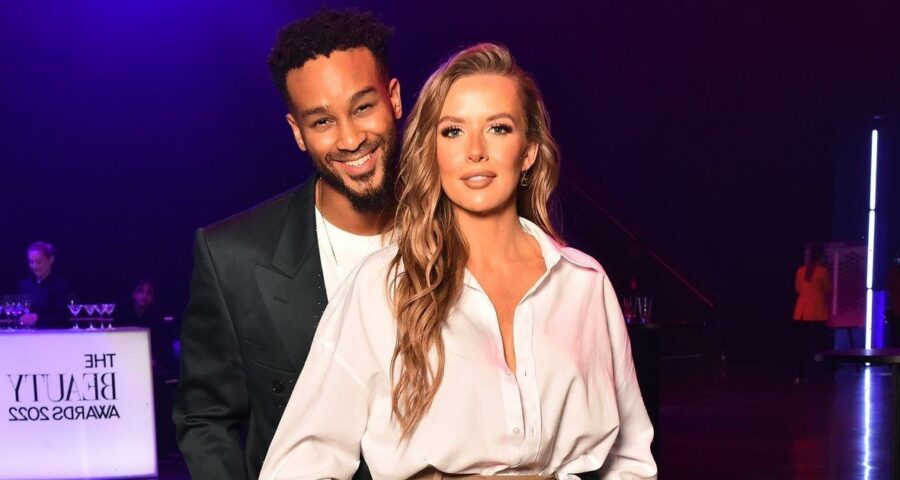 Faye Winter opted for an understated look for her latest appearance with Love Island beau Teddy Soares at the ASOS Beauty Awards 2022.

The star, 26, was seen in a demure yet stylish look as she appeared at the glittering ceremony in central London on Tuesday night alongside many of her former Love Island cast mates.

The reality star wore a pristine white blouse which was unbuttoned to the waist along with brown tailored trousers. Faye then paired her look with some of knee-high brown boots and matching nails, while wearing her long golden hair parted to one side and in loose curls.

Faye’s boyfriend Teddy, 27, had a similarly smart look, wearing a black suit, which he kept from looking too formal by pairing with a white T-shirt and black and white trainers.

The couple were seen cuddling up close as they posed for photos, with Teddy, at one point, planting a sweet kiss on Faye’s cheek. They were joined by several other cast members from their time in the Love Island villa last summer, including Dancing On Ice star Liberty Poole.

Liberty, 22, who is currently rumoured to be having a romance with her DOI dance partner Joe Johnson, wore an olive green leather dress with corset detailing and added a pop of colour with some bright red shoes.

The star wore her blonde hair straight and ditched the extensions as her locks appeared shorter than usual. Liberty also kept her accessories minimal, wearing a couple of simple gold rings. Love Island 2021 winners Millie Court, 25, and Liam Reardon, 23, were all smiles at the event as they coordinated in all-black outfits.

Millie wore a simple, but effective, black dress along with platform heels and a statement gold choker necklace, while she wore her blonde hair in a face-framing blow dry. Liam matched his girlfriend in a smart black jacket and trousers, which he wore over a black T-shirt.

Bombshell Lucinda Strafford, 22, was also at the event, opting for a simple black top and a fuchsia pink sequinned skirt, which was lined with feathers. The star completed her look with a small pink clutch bag and strappy black stiletto heels. Faye and Teddy’s latest appearance comes after Faye admitted the trait she finds most annoying in boyfriend Teddy.

The couple recently played Mr & Mrs in an exclusive video with OK! Magazine, where each couple are tasked with answering questions about the other.

From favourite drinks to favourite perfumes, the couple did their best at hazarding a guess as to who liked what.

And Teddy, who recently moved into a new home with Faye, asked his girlfriend what annoyed her the most about him.

It didn't take Faye long to respond, admitting she couldn't stand his "dithering in car parks." "When you dither, or getting you out of the house that's hard," the star confessed.

Teddy said it's because he has to check all of the lights are off and have a check around and put his keys on the side.

Faye added: "He even checks all of the windows, but I'm just like 'get out of the house we have places to be.'"

In agreement Teddy said he understood why that was Faye's biggest pet peeve of his.

"Yeah I'll give you that. I definitely do do that," the Love Islander added.

Teddy guessed correctly that Faye was born in Devon, and Faye also knew Teddy was born in Madrid.

Hunk Teddy asked blonde beauty Faye what's the one thing people don't know about him, to which she replied: "I think people don't know that you're quite an insecure person and you don't actually believe in yourself."

"You always question yourself," and Teddy replied: "Well yes every now and again I'll be like 'babe what do you think of this,'" to which Faye replied: "FIT."