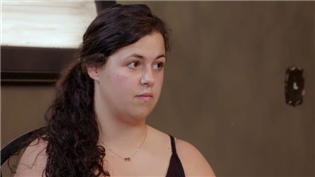 Emily and Kobe are new to us but not to each other, having met years ago in China.

They already share a child, but have been separated due to the pandemic. Only now can they live as a family.

Emily’s parents have potential concerns, and are all but begging Emily to not get pregnant again once Kobe arrives.

Season 9 of 90 Day Fiance premieres on Sunday, April 17 on TLC and on Discovery Plus.

“We all hope it works,” Emily’s mom is shown assuring her adult daughter at the beginning of a sneak peek.

“We all are hoping he’s the great guy that you say he is,” her mom tells Emily.

“But,” she warns her daughter, “he may be a different person when he comes here.”

Certainly, 90 Day Fiance viewers are familiar with the phenomenon.

Sometimes, couples grow apart between trips, or feel isolated in a new place, or cannot adapt to parenthood.

Emily’s mother speaks to the camera during a confessional, explaining her worries.

“My concern is that she’s not head over heels in love with him when he comes,” she notes.

“Or somethings not the same,” she continues, “and she marries him anyway.”

Emily’s father is also citing potential obstacles, including their location.

Kobe is an underwear model from Cameroon who has traveled to various countries, which is how he and Emily first met.

How will he adjust to life in their town — as someone from another country, as a Black man in a mostly white community, and as a new father?

“You’re not going to have the wild life you had in China,” Emily’s dad reminds Emily.

“He’s going to have to be domesticated very quickly as far as being a dad,” he notes, referring to his grandson.

Emily’s dad notes that Kobe may have a hard time adjusting to “taking care of a crazy one and half year old.”

“He’s going to have to be a stay-at-home dad for a while,” Emily’s dad reminds her.

Speaking of which, Kobe — like about half of the cast of this show over the years — won’t be able to work without a work visa.

That’s not the same as the K-1 visa, meaning that he could be effectively “stuck” at home in parent mode, unable to seek employment.

He implores her: “One thing is for sure, you better not get pregnant.”

Emily assures her parents: “I have birth control, I just haven’t taken it yet.”

Emily’s mom reminds her: “It doesn’t work if you don’t take it.”

“It’s fine,” Emily promises her. “We’re not going to have any more kids in this house.”

Her father’s lips turn up in a smile as Emily is already hinting at future grandchildren.

Most parents would love to be able to pick up the tab for their child and grandchild during difficult times.

We don’t know how Kobe will adjust to Emily’s town or his new role as a father, but the trailer sure did hint at a possible pregnancy.