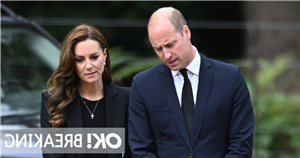 Prince William and his wife Kate, the Princess of Wales stepped out together on Thursday as they visited the Sandringham Estate in Norfolk to view the countless floral tributes that have been left for the Queen since her death last week.

Since her sad passing, thousands of floral tributes have been left by members of then public at royal palaces all over the country, often with sweet messages and drawings – and in some cases even a few marmalade sandwiches in a nod to her heartwarming Platinum Jubilee performance alongside Paddington bear.

Dressed in all-black for the visit, the Prince and Princess of Wales took several moments to view the various floral arrangements and gifts that have been left for the late monarch, while also taking the time to read the poignant messages of sympathy that have been left in her memory.

William in particular appeared to be deeply moved and visibly emotional as he bowed his head to look at the large number of colourful tributes in front of the estate’s gates.

Kate also paid a subtle tribute to The Queen with her jewellery choice, as she opted to wear a pair of delicate pearl earrings that had previously belonged to the late monarch herself, alongside a chic black overcoat and dress for the occasion.

Pearl jewellery has long been synonymous with the funeral customs of grieving royals, with the tradition dating back to the time of Queen Victoria – but even beyond tradition, they were also one of the Queen’s favourite precious stones.

Similar floral arrangements have been left at Buckingham Palace, with royal staff being so overwhelmed by the sheer volume of flowers that the tributes needed to be relocated to the royal parks nearby, including neighbouring Green Park, and St. James Park.

The Queen’s children have also been overwhelmed by the outpouring of love for their late mother, as King Charles, Princess Anne, Prince Andrew and Prince Edward were seen to become visibly emotional as they surveyed the tributes left in their mother’s memory in the days since her death.

This 100 page tribute looks back at the life of our most beloved monarch, Queen Elizabeth II, marking key events during her remarkable 70-year reign, as well as her childhood as a young princess, her enduring love for Prince Philip and her family, and the lasting legacy she leaves our nation.

This edition is available to buy in stores now or it can be purchased online here.

The Wales’ latest visit also echoed back to an earlier outing at Windsor last weekend, when Prince William personally extended an olive branch to his brother Prince Harry and his wife Meghan Markle after many months of tense animosity.

Both brothers reunited on Saturday as they browsed the floral tributes that had been left at the Queen’s home in Windsor, with many fans praising the late monarch for her ability to bring them together, even in the sad circumstance of her passing.

The brothers also once again put on a united front on Wednesday, as they marched side by side in a funeral procession to convey the Queen’s coffin from Buckingham Palace to Westminster Hall where it will Lie-in-State until the funeral on Monday.

According to logistics chiefs at Whitehall, it was originally anticipated that 40,000 people a day would line up to pay their respects to the Queen as she is Lying-in-State, but that number is now expected to be far, far greater with mourners warned to expect heavy delays and even queues overnight.

So far, numbers are estimated to exceed those that paid their respects to the Queen Mother back in 2002, with some experts even hinting it may be closer to the millions of mourners that filed past Pope John Paul II in 2005.

The country will bid a final farewell to her majesty on Monday, as her state funeral takes place.