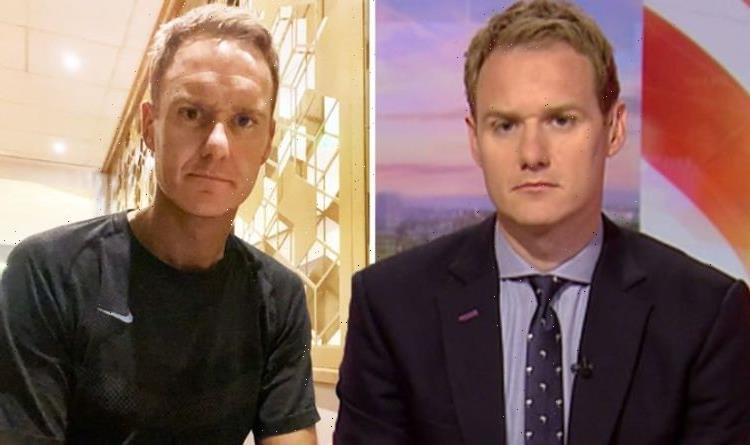 Dan Walker shut down a Twitter user after they questioned if BBC licence payers’ money had been used to purchase a meal following his rehearsals on Strictly Come Dancing. The BBC Breakfast presenter issued a brutal comeback as he defended himself.

It comes after the 44-year-old took to the micro-blogging site and shared a photo of himself yesterday.

The dad-of-three tucked into a quiet meal after he wrapped up his rehearsals on Strictly.

In view of his 729,000 followers, Dan penned: “I do love Strictly but I will never get used to spending Friday nights with this strangely brown fella,” making reference to being sprayed with fake tan.

He accompanied the post with a snap of his meal, adding: “Yes I did have soup and nachos. #Tanarama #BrownTown #DontWorryItWashesOff.”

Twitter user, BoJos Britain, quizzed: “Serious question… Do you buy your own food or is it taxpayer funded?”

Dan reacted to the post as he confirmed that all of his meals are funded by the presenter.

He replied: “Ok… yes… I did pay for this… like I do all the time. If you’re happy to pass on your details I can send you the bill direct though.

Dan added: “Water was from the tap.”

The person in question replied: “Brilliant!! I’m so glad. Too many these days sponge of the taxpayers. Very happy to hear you pay for your own.

“I know some are offended by my question but it’s a fair question. Well played.”

In a follow-up tweet, BoJos Britain added: “Absolutely the BBC pay him. But then does he put his food bills through as expenses or does he pay for it with his money?

Earlier this year, Dan was forced to deny a report which claimed he used BBC licence payers’ money for the £200-a-time round trip.

In April, the presenter took to Twitter and rubbished the claims as fake news.

Following the report in December 2019, he responded to a social media user who raised his taxi use, writing: “I suggest a New Year’s resolution to you… stop reading and believing rubbish newspapers.”

Meanwhile, Dan is set to take to the dancefloor tonight alongside his professional dancer Nadiya Bychkova.

He tweeted: “Greetings all. Tonight @NadiyaBychkova and I will be dancing an American Smooth to King Of The Road. It’s so much fun!

“I hope you enjoy it. The show starts at 6.40pm on BBC One. Thanks for all the support.”

Strictly Come Dancing airs tonight on BBC One at 6.40pm.