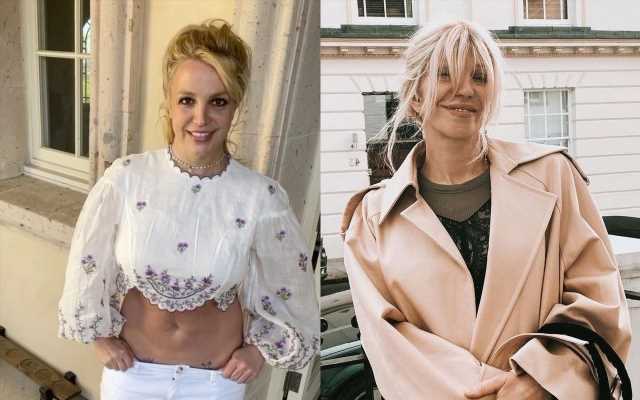 The Hole frontwoman pays tribute to Britney Spears after she takes part in an expose as the ‘I’m Slave 4 U’ singer is fighting to regain control of her life amid alleged abusive conservatorship.

AceShowbiz –Courtney Love gave Britney Spears a big boost over the weekend by serving up an emotional cover of the pop star’s “Lucky” after speaking out about her conservatorship.

The Hole singer spoke with the New Yorker for Ronan Farrow and Jia Tolentino‘s expose on Britney’s troubles, which was published on Saturday morning (03Jul21), and she followed up the explosive article with a video cover of Spears’ 2000 hit, posted on Instagram.

“Someone asked me what song I was going to cover next,” Love said. “I don’t have a guitar player handy, so yeah. It’s written by one of those fantastic old Swedish people – gentleman – and it’s got, like, B-sharp 7th. I don’t know that s**t. OK, let’s just try it.”

She grew emotional towards the end of the video, adding, “I’m actually crying. I f**kin’ hate this when it happens to me.”

The rocker also congratulated Ronan for a job well done on the magazine article, tweeting, “An honour to speak to an honourable man. Speak again soon.”

Courtney Love is among the early supporters of “Free Britney” movement before the “Framing Britney Spears” documentary.

Courtney previously revealed that Britney’s former business manager Lou Taylor had tried to put Courtney under a similar conservatorship. “Let’s dig in and get this person removed,” Courtney put Lou on blast. “I hope the investigation into the conservatorship going well. I really don’t like doing this. But it appears no one else is.”

Courtney explained, “In 2010 I threatened you with jury trial if you persisted in trying to take over my estate. I also meant it. I keep my word.”

Cher, Eve, and Miley Cyrus are also among Britney Spears’ early supporters as the Southern Belle is fighting to regain control of her life.