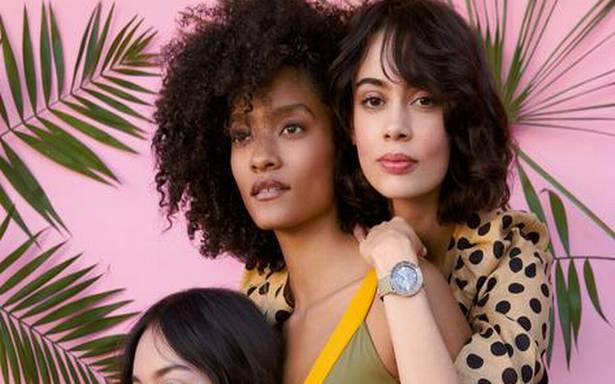 How does a 137-year-old Swiss watch house that has positioned itself as a pilots’ brand future-proof itself? It bolsters its digital presence, takes a shot at gamification, aligns itself with surfers and drone racers, and learns to court women. That’s right, CEO Georges Kern has made no secret of the fact that he wishes to position Breitling as a casual, inclusive alternative to traditional luxury brands, and getting women customers on board is a big part of that plan.

Earlier this week, Breitling partnered with Drest, an immersive fashion and styling gaming app, to introduce a new batch of Superoceans. While the ‘Breitling Superocean Heritage ’57 Pastel Paradise Capsule Collection’ can be a mouthful, this post-pandemic summer edition of the brand’s retro dive watch is a refreshing departure from most women’s watches. Take its size for instance – the 38mm stainless steel case is just right for women who say no to ‘dainty’. And men won’t be shy about wearing them too. As seen at the Watches & Wonders Geneva fair earlier this year, there is an infusion of pastels on both suit and sports watches for men (I’m looking at your cotton candy experiment, Oris). Breitling’s Pastel Paradise doesn’t disappoint, with white, aquamarine, mint green and iced latte tone-on-tone dials, bezels and straps. These elegant beauties (there’s the popular rainbow dial too), are great for Drest’s ‘dressing up avatars’ and mood board challenges. A 72-hour challenge that began Monday when the collection dropped, saw players pairing the new Superocean models with clothes and accessories from over 200 brands. The ensembles gained them points to level up in the game, but unfortunately no grand prize like the Chronomat Automatic 36 in stainless steel (approx 4,700 USD) that one player walked away with earlier this year. That was the result of Breitling’s debut challenge with Drest in January, a successful branding exercise.

“We needed some colours and fun after this Covid situation, and the team redesigned the 1957 dive watch in a very modern way, with the colours and ceramic,” begins Kern about Pastel Paradise. He is at a virtual roundtable that includes Drest’s founder and CEO, Lucy Yeomans, and Australian pro surfer Sally Fitzgibbons. Kern has been championing ‘retro modern’ since he took over as Breitling’s chief back in 2017. He has ensured that their advertising, their loft-style boutiques and the sports they support reflect the current casualisation of the luxury industry. There is surfing, a motorcycle championship celebrating vintage motorbikes, the Drone Champions League, and a triathlon-style race with cycling app, Strava. “We are discovering these types of sports and partnerships, which are more approachable for everybody. They represent the post-Covid lifestyle that people dream of, with perhaps less of the gala dinners and formal set-ups of the past. And we are not in Formula One, not in golf, not in tennis. We want to be sustainable and casual,” Kern insists.

Most luxury watch brands have been addressing sustainability and Breitling is no different; last October, the brand introduced a reusable watch box created from upcycled plastic bottles, and a couple of years before that, a blue strap made from fishing nets and nylon aqua waste. During our media interaction, a beaming Fitzgibbons recalls how she has noticed while training for the Olympics – surfing will make its Olympic debut at the Tokyo Games in Japan later this month – that the ocean clarity has improved during the lockdown. There are fewer "plastic explosions”. She says she is working with fellow surfers to encourage clean beaches. At one point during our chat, Yeomans adds that she has her “eye on Sally as a surfer avatar”. Drest has six of the world’s top supermodels appearing as themselves as avatars in the game, and a range of body types and ethnicities.

Drest, she agrees, has offered light-hearted escapism during the pandemic. “It allowed people to scratch that fashion itch at a time when they couldn’t dress up, couldn’t go out.” For Breitling it is about attracting future customers, especially since more than half of Drest’s users are said to be women between 21 and 39 years. “Drest is the next level for us, as we have not been in fashion. Neo luxury is about having consumers participate in the creative process,” Kern continues. It doesn’t matter if some players can’t be bothered with the details – say, that these watches run on COSC-certified Breitling Caliber 10. “Through platforms like Drest, we see how participants interpret the brand. It’s super helpful for us in making products and campaigns,” he concludes.