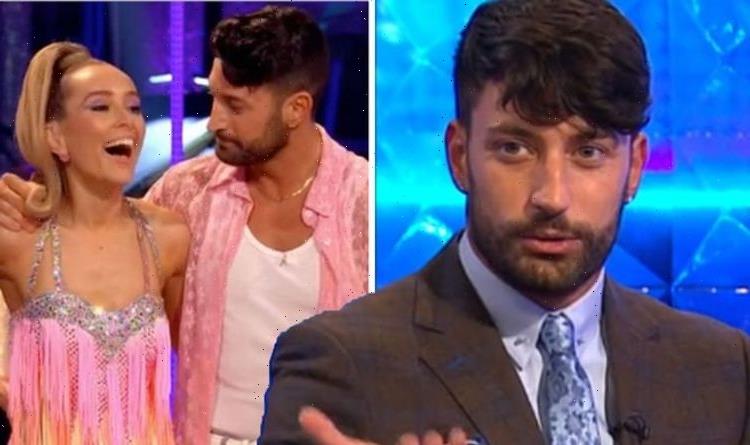 Giovanni Pernice and Rose Ayling-Ellis have been wowing the judges on Strictly Come Dancing so far. The pair have racked up two high scores already on the dancefloor but now Giovanni has revealed it’s on social media where they’ve been told they need to do more.

The professional dancer hinted at this last night when he shared a video to the platform of him and his partner.

He posted a short video of him and Rose eating sandwiches on Instagram.

This featured a caption reading: “We have been told we have to be on social media more.”

He then shared a second video of the pair looking awkward as they sat in front of the camera.

Below the image, Rose commented: “Why so serious?”

The pair have been sharing updates from the training room but not as many as some of their Strictly co-stars.

They’ve shared several hilarious clips of them looking very bored on their respective accounts following their appearance on It Takes Two on Monday.

Giovanni’s post drove his followers wild when he posted it yesterday as they took to the comments.

Some of their Strictly co-stars reacted to the video with AJ Odudu sharing laughing emojis while Dan Walker simply shared some fire emojis.

While Alexandra Burke wrote: “This has killed me off.”

Giovanni’s former partner Michelle Visage then penned: “SHE GETS TO EAT?!!!!! I DIDN’T!”

Rose and Giovanni appeared on Monday night’s It Takes Two last night to tease their next performance.

They’ll be dancing the Foxtrot which is inspired by the hit film Titanic.

She said: “I’m looking forward to it.

“It’ll be nice to see a different side of me… a bit more elegant, hopefully.

“The posture is really difficult because you have to really stay in your posture.