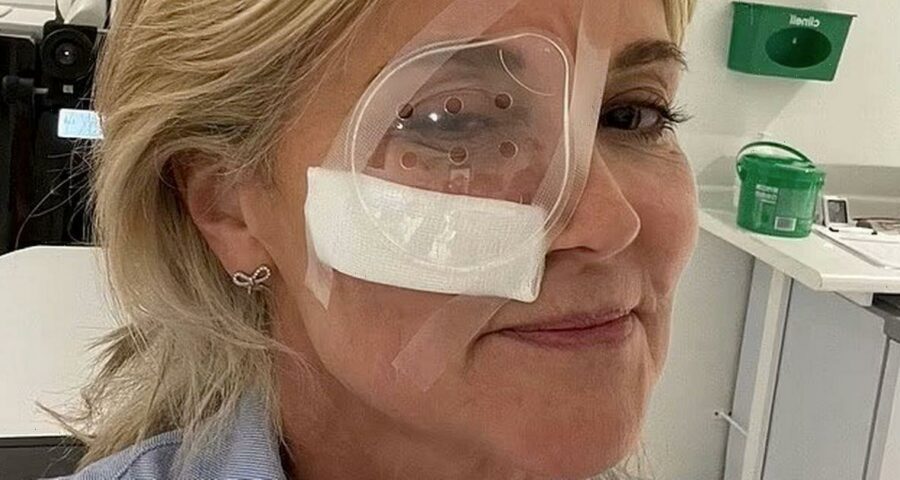 Anthea Turner has detailed the freak accident she experienced during a hotel stay that nearly left her blind in one eye.

The TV veteran, 61, whose Real Dirty Dancing pal Lee Ryan said James Argent was "obsessed" with her, took to her Instagram feed to post a series of front page news articles before detailing what happened to her.

In the caption, she wrote: "Just posting these now because I want to keep you safe – You might have seen in the press 2 weeks ago a story I told of a near fatal accident I had with my left eye, but because there were no outside visible signs I did the classic thing which is, think it’ll all go away," with a side eyes emoji.

However, the incident actually came close to her experiencing a retinal detachment, which would have made her permanently blind in one eye.

She said: "But what I didn’t realise is I’d actually due to the impact of a pull down blind cord smacking me square in the eye made a tear in my retina and came frighteningly close to retinal detachment which results in permanent blindness."

Anthea, who opened up on her feud with Eamonn Holmes last year and said she was "still hurt", went on: "put this message to the back of your mind in case you need it which is – If you sustain ANY injury to your eye go and get it checked out immediately, I did after a week [hands covering eyes monkey emoji] then was literally rushed into an operating room and due to the expertise of vitreoretinal surgeon @chien_wong_ at @ocl_vision I live to fight another day.

"I will always be in debt to him and @alimearza because what could have happened would have changed my life and it frightens the hell out of me when I think about it, which I now try not to," followed by a side eyes emoji and three kissing lips emojis.

Celebrity friends were quick to comment as Vanessa Feltz said: "O my goodness dear friend have just seen this. Sending you warm wishes and thanking you for sharing your frightening story. You are brave and will make a difference. Xxxx".

Keith Lemon shared: "Hope you’re ok x," while Liz Earle added: "darling girl – how dreadful and frightening for you. Sending so much love for a full and speedy recovery," with two red heart emojis.

Anthea's eye accident comes just months after she fractured her foot while running for a taxi in London.

Taking to her Instagram in November 2021, the television presenter explained that following a luxury shopping trip in the department story Fenwick, she was forced to seek emergency treatment in the hospital.

The star shared a collage of snaps on her Instagram of her visit to the hospital as well as an X-ray scan of the injury she sustained to her foot.

Anthea explained that the injury occurred while making her way to a celebrity charity event, which she still attended despite being in "absolute agony".

She then wrote: "So, yesterday didn't work out as expected!.

"Outside Fenwicks hailed a black cab, but rushing to get in tripped on a dropped curb twisting my foot, immediately it started to hurt and by the time I arrived @martinezbarlondon where the shoot was taking place, was in total agony."

After "posing" at the event, Andrea said that she decided to "go home via Chelsea and Westminster A&E."

"Now wearing funny boot and resting my fractured 5th Metatarsal in bag of ice taking painkillers every 4 hour," she explained.

For all your updates on Anthea Turner, sign up to our daily OK! newsletter.