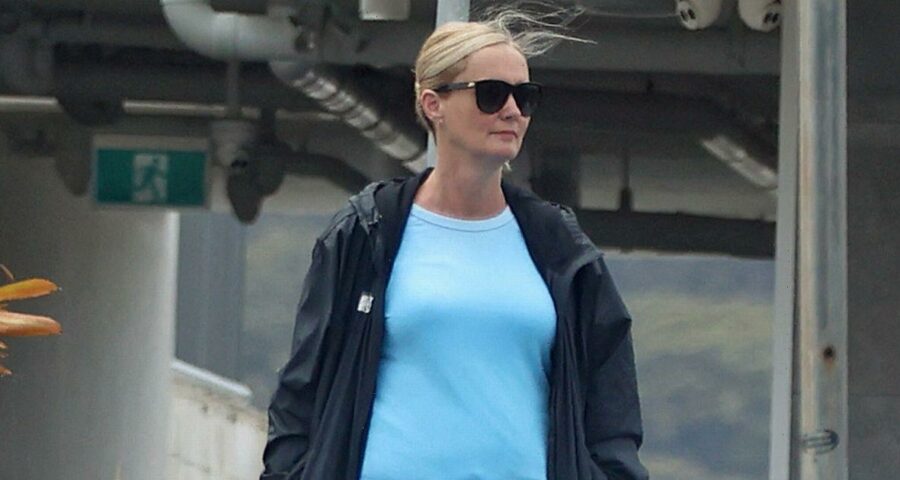 Ant McPartlin's wife Anne-Marie Corbett has been spotted enjoying a stroll through Cabarita beach alone while her husband is busy getting ready for the launch of I'm A Celebrity… Get Me Out of Here! 2022.

Anne-Marie, who married the fan-favourite TV presenter in 2021 with a star-studded guest list, was spotted cutting a casual figure as she donned a blue jumper with a matching pair of jogging bottoms for the outing.

Wrapping up in a black raincoat on top the ensemble, Ant's other half donned a pair of nude sandals and accessorised with some black sunglasses, shielding her eyes from the bright day.

Completing the look, the blonde beauty styled her mane back into a bun and flashed a small smile as she crossed the street at Cabarita beach in northern New South Wales.

Anne-Marie appeared to be taking some much needed me time Down Under as her significant other has been focusing his efforts into ensuring the I'm A Celebrity series start on 6 November goes off without a hitch.

The pair have spent some time together though as they explored the area with Anne-Marie's two daughters just yesterday on Monday 31 October.

This year's series of I'm A Celebrity is sure to be a riveting watch as the incredible line-up includes Zara Tindall's husband Mike, 44, singer and songwriter Boy George, 61, and Love Island star Olivia Attwood, 31.

It was also confirmed on 1 November that former health secretary Matt Hancock, 44, will be joining the line-up as a bombshell campmate later on.

Mr. Hancock has had the Tory whip suspended after it emerged he was entering the jungle as Chief whip Simon Hart said: “Following a conversation with Matt Hancock, I have considered the situation and believe this is a matter serious enough to warrant suspension of the whip with immediate effect.”

A “political ally” of Mr. Hancock said the former health secretary’s appearance on the reality TV show will be an opportunity to show the “human side” of MPs.

They said the West Suffolk MP will make a donation to St Nicholas Hospice in Suffolk, and declare the amount he receives from the show to Parliament.

“There are many ways to do the job of being an MP. Whether he’s in camp for one-day or three weeks, there are very few places people will be able to see a politician as they really are,” they said. “Where better to show the human side of those who make these decisions than with the most watched programme on TV?

“Politicians like Matt must go to where the people are – particularly those who are politically disengaged. Matt’s of the view that we must embrace popular culture. Rather than looking down on reality TV, we should see it for what it is – a powerful tool to get our message heard by younger generations.

“Matt will be making a donation to St Nicholas Hospice in Suffolk, and he will, of course, declare the amount he receives from the show to Parliament to ensure complete transparency, as normal.”