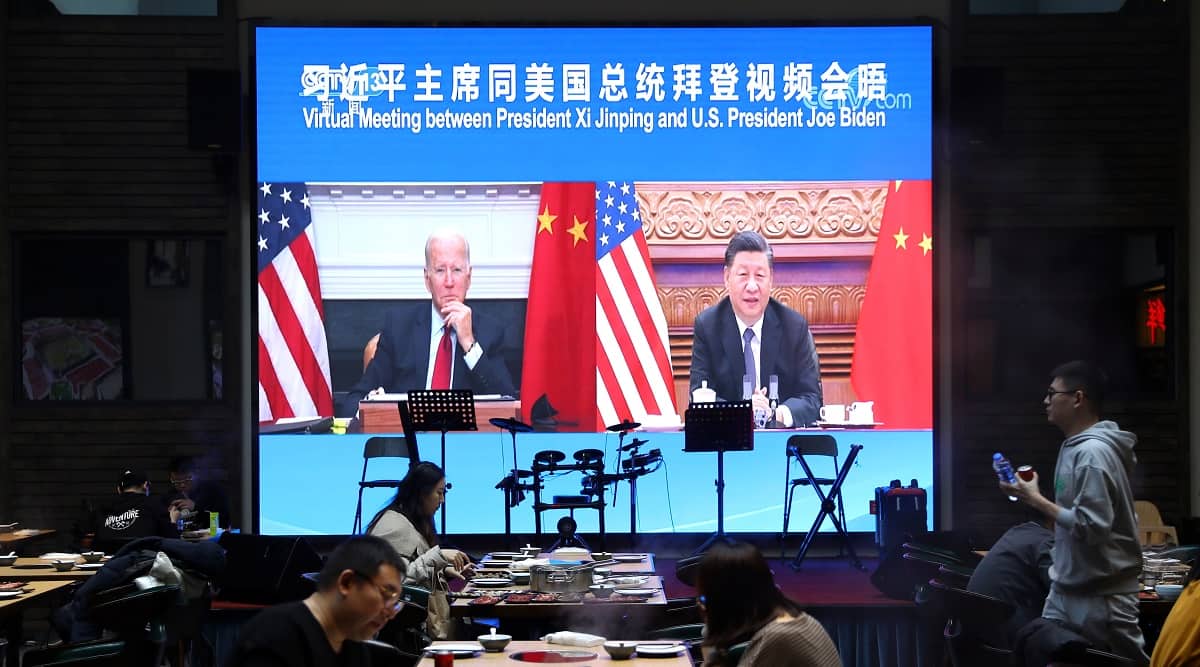 Striking a tough posture at the much-awaited virtual summit with his US counterpart Joe Biden on Tuesday, President Xi Jinping said that China will “certainly defend” its sovereignty and security interests as he warned that whoever plays with fire over Taiwan will “get burnt”.

In a lengthy speech touching a host of issues at the over three-hour-long summit, Xi, fresh from last week’s ruling Communist Party of China Plenum meet endorsing an unprecedented third term for him from next year and perhaps for life, pointed Beijing’s “red lines” on a host of issues, including Taiwan, and said China’s rise is an “inevitable trend of history” and cannot be stopped.

On Taiwan, where China has pressed over 200 military jets into the estranged islands air defence zone ratcheting tensions, 68-year-old Xi ascribed the tensions to the repeated attempts by the Taiwan authorities to look for US support for their independence agenda as well as the intention of some Americans to use Taiwan to contain China.

“Such moves are extremely dangerous, just like playing with fire. Whoever plays with fire will get burnt. The one-China principle and the three China-US Joint Communiques are the political foundation of China-US relations,” Xi told Biden.

Previous US administrations have all made clear commitments on this question. “The true status quo of the Taiwan question and what lies at the heart of one-China are as follows: there is but one China in the world and Taiwan is part of China, and the Government of the People’s Republic of China is the sole legal government representing China,” he said.

“Achieving China’s complete reunification is an aspiration shared by all sons and daughters of the Chinese nation. We have patience and will strive for the prospect of peaceful reunification with utmost sincerity and efforts. That said, should the separatist forces for Taiwan independence provoke us, force our hands or even cross the red line, we will be compelled to take resolute measures,” he said.

Significantly, Xi in his talks with Biden has referred to the just-concluded meeting of the CPC Plenum, which has reinforced his powers hailing him as “helmsman”, an honorific title reserved for party founder Mao Zedong.

The Plenum took stock of the major achievements and historical experience of the CPC in the past 100 years, Xi said. “Over the past century, the CPC has kept to its founding aspiration and mission of striving for the happiness of the Chinese people and rejuvenation of the Chinese nation,” he said. “A lot has been accomplished in this direction, but that is far from enough. More needs to be done.”

Xi said since he took over power in 2012 he had stated “publicly that the Chinese people’s aspiration for a better life is the goal to strive for.”

“Any attempt to stop this historical trend will be rejected by the Chinese people, and will by no means succeed,” he said in an apparent reference to the US attempts to contain China’s rise.

“As China’s leader, serving the 1.4 billion Chinese people and working with them for a better life is a great challenge and a great responsibility. I shall put aside my own well-being and live up to people’s expectations,” he said.

Asking Biden to seize “political leadership” to bring the bilateral ties back on track from the path of confrontation, Xi said managing differences and sensitive issues in a constructive way is the way out to prevent China-US relations from getting “derailed or out of control”.

“It is only natural for the two countries to have differences. The key is to manage them constructively so that they don’t magnify or exacerbate,” he said.

But at the same time, he said, “China will certainly defend its sovereignty, security and development interests. It is important that the US properly handle the relevant issues with prudence.”

“History is a fair judge. What a statesman does, be it right or wrong, be it an accomplishment or a failure, will all be recorded by history. It is hoped that President Biden will demonstrate political leadership and steer America’s China policy back on the track of reason and pragmatism,” he said.

“With their interests deeply intertwined, China and the US stand to gain from cooperation and lose from confrontation. The world is big enough for the countries to develop individually and collectively. The right thing to do is to choose mutual benefit over a zero-sum game or the I-win-you-lose approach,” Xi said.

Without referring to his multibillion-dollar pet project, the Belt and Road Initiative (BRI), or the rival Built Back Better World (B3W) floated by Biden, Xi said the global initiatives China has proposed are all open to the US. “We hope the reverse is also true,” he said.

He also hit out at Biden’s initiative of uniting countries with democratic systems with plans to hold a summit of democracies next month to unite against China and authoritarian regimes.

“Democracy is not mass produced with a uniform model or configuration for countries around the world. Whether a country is democratic or not should be left to its own people to decide. Dismissing forms of democracy that are different from one’s own is in itself undemocratic,” Xi said.

In an apparent reference to US allegations of genocide against Uygurs in Xinjiang and Tibet as well as Hong Kong, he said China is ready to have dialogues on human rights on the basis of mutual respect, “but we oppose using human rights to meddle in other countries’ internal affairs”.

On climate change, he referred to the recent agreement between top polluters – US and China – at the COP26 Glasgow summit and said, “China will make the world’s biggest cut in carbon emission intensity in the shortest time frame in history, a task that will require extraordinary efforts. China means what it says. It only commits to what it can deliver, and never makes a promise it cannot keep.”

On COVID-19 and the debate over its origins in Wuhan where the virus first surfaced in 2019, Xi said that solidarity and cooperation is the most powerful weapon for the international community to defeat COVID-19.

“Response to any major disease must be based on science. Politicising diseases does no good but only harm. The pressing priority in the global COVID response is to address the vaccine deficits and close the vaccination gap,” he said and suggested global vaccine cooperation.

He expressed his readiness to stay in touch with Biden through multiple means to set the direction and inject more momentum into bilateral relations.

The summit is the third engagement between Xi and Biden since February. The two leaders had a lengthy phone call in September.

The meeting came amid high tension in China-US bilateral relationship over Beijing’s actions on issues like trade, human rights, the South China Sea and Taiwan.