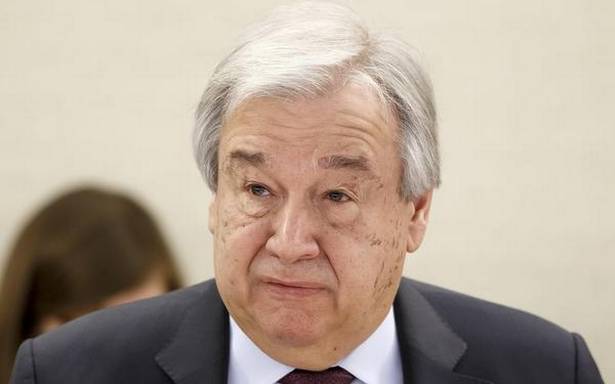 Secretary-General Antonio Guterres pledged Friday that the United Nations will do everything it can to unite the international community and create conditions for the military coup in Myanmar to be reversed.

The U.N. chief told a news conference it is “absolutely essential” to carry out the Security Council’s calls for a return to democracy, respect for the results of the November parliamentary elections, and release of all people detained by the military, “which means the reversal of the coup that took place.”

“It is absolutely essential that that moves forward, and for that, I believe, we need to have all possible areas of pressure to make it happen,” Mr. Guterres said.

Myanmar’s military announced Monday on the eve of the meeting of new Parliament that it will take power for one year, accusing leader Aung San Suu Kyi’s government of not investigating allegations of voter fraud in the November elections, where its party did poorly. It detained Suu Kyi, whose party swept that vote, and other lawmakers, activists, journalists and members of civil society. The election commission had refuted the military’s allegations.

In its first statement following the military’s takeover on Thursday, the Security Council “stressed the need to uphold democratic institutions and processes, refrain from violence, and fully respect human rights, fundamental freedoms and the rule of law.” It also “emphasised the need for the continued support of the democratic transition in Myanmar.”

Mr. Guterres said Christine Schraner Burgener, the U.N. special envoy for Myanmar, had a first contact Friday with the military since the coup and expressed the U.N.’s strong opposition to the takeover.

According to U.N. spokesman Stephane Dujarric, she reiterated to Deputy Commander-in-Chief Vice Gen. Soe Win “the secretary-general’s strong condemnation of the military’s action that disrupted the democratic reforms that were taking place in the country.”

Schraner Burgener also reiterated her call for the immediate release of all detainees and emphasized the need for progress on the safe and voluntary repatriation of the Rohingya refugees, Dujarric said, calling it “an important conversation.”

More than 700,000 Rohingya have fled from Myanmar to Bangladesh since August 2017, when the military launched a clearance operation in response to attacks by a rebel group. The security forces have been accused of mass rapes, killings and the burning of thousands of homes. A year ago, the U.N.’s top court, the International Court of Justice, ordered Myanmar to do all it can to prevent genocide against the Rohingya, a Muslim minority.

Mr. Guterres said Schraner Burgener is also in contact with the Association of Southeast Asian Nations.

Brunei, which chairs the 10-nation regional group, including Myanmar, issued a statement Monday noting the bloc’s principles include “the adherence to the principles of democracy, the rule of law and good governance, respect for and protection of human rights and fundamental freedoms.”

The statement encouraged “the pursuance of dialogue, reconciliation and the return to normalcy in accordance with the will and interests of the people of Myanmar,” but it made no mention of any action by ASEAN to take the lead in returning Myanmar to a democratic path.

On Friday, the leaders of Malaysia and Indonesia expressed concern about the coup and asked ASEAN foreign ministers to hold a special meeting to discuss the issue.

“Indonesia and Malaysia take the political situation in Myanmar seriously,” Malaysian Prime Minister Muhyiddin Yassin said after meeting with Indonesian President Joko Widodo in Jakarta. “This is a step backwards in Myanmar’s democratic transition. We fear the political unrest in Myanmar could disturb the security and stability in this region.”

Mr. Guterres said the U.N. is also in contact with the 15-member Security Council, which is in charge of international peace and security.

“We will do everything we can to make the international community united in making sure that conditions are created for this coup to be reversed,” the Secretary-General said.