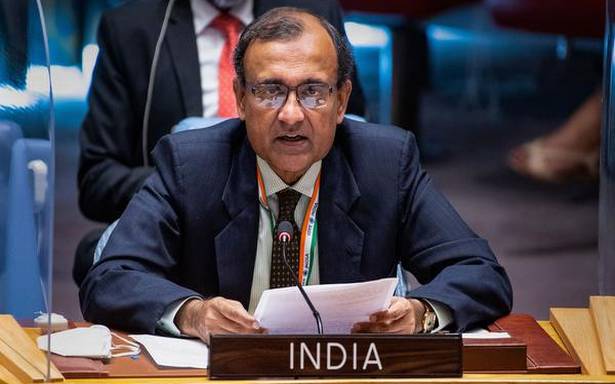 Permanent Representative to the UN Ambassador T. S. Tirumurti reiterated India’s firm belief that terrorism in one part of the world is threat to peace and security of entire world.

India has long borne the brunt of cross-border terrorism, with victims of the “dastardly” 2008 Mumbai terror attack and the 2016 Pathankot terror act, perpetrated by Pakistan-based terror groups, yet to get justice, New Delhi’s envoy has told the UN Security Council.

Speaking in the Security Council briefing on ‘Threat to International Peace & Security Caused by Terrorist Acts’ on Wednesday, Permanent Representative to the UN Ambassador T. S. Tirumurti reiterated India’s firm belief that terrorism in one part of the world is threat to peace and security of entire world.

He said that as a country that has long borne the brunt of cross-border terrorism, including the 2008 Mumbai terror attack and the 2016 Pathankot terror act, with victims of both these dastardly acts yet to get justice, “India is acutely aware of the human cost of terrorism and remains fully committed to bringing the perpetrators of these terror attacks to justice.” While condemning terror attacks, “our response should be unified, and unequivocal. We should not forget the fact that, even after 20 years of September 11 attack, we have leaders who, without any remorse, continue to defend Osama Bin Laden as a martyr,” he said.

Tirumurti was making a reference to Pakistan Prime Minister Imran Khan, who had called the slain Al Qaeda chief a martyr.

Terrorists of Pakistan-based outfits Lashkar-e-Tayyiba and Jaish-e-Mohammed (JeM) had carried out the 26/11 Mumbai terror attack and the January 2016 Pathankot airbase attack.

At the briefing, which took up Secretary General Antonio Guterres’ 14th Report on Threat Posed by ISIL/Da’esh, Tirumurti expressed heartfelt condolences to all the families of victims who lost their loved ones in recent terror attacks in Afghanistan, UAE, Iraq, Syria, Congo and Uganda.

Tirumurti further told the Council that terrorism impacts everyone, irrespective of the place or origin.

“Unfortunately, it took us decades, and then September 11 attack, to come out of a flawed mindset of treating terrorism based on motivations behind terror acts,” he said.

He added that Security Council resolution 1566 of 2004 notes that terrorist acts are under no circumstances justifiable by considerations of a political, philosophical, ideological, racial, ethnic, religious or other similar nature.

The resolution further underlines that terrorism seriously impairs the enjoyment of human rights and threatens social and economic development of all nations.

“It is essential that we keep this in mind as we look to further strengthen our counter terror architecture,” Tirumurti said.

He voiced concern that today the terrorists’ use of ICT, social media, emerging technologies such as new digital payment methods, encrypted messaging services, cryptocurrencies, crowdfunding platforms and Unmanned Aircraft Systems pose a “dynamic threat” for which most of the member states do not have adequate response capabilities.

“We have recently witnessed terror attacks through drones in our neighbourhood and now in UAE and Saudi Arabia, which have been condemned strongly by the Security Council. The recent Council resolution 2617 takes note of this threat posed by Unmanned Aircraft Systems. We need to work together to develop appropriate solutions and evolve global standards to address these threats,” he said.

Lashkar-e-Taiba has been suspected to have been behind the drone attack. In August last year, a bomb-laden drone had targeted an airport in southwestern Saudi Arabia, wounding eight people and damaging a civilian plane.

In January this year, two Indians and a Pakistani national were killed and six others injured in a suspected Houthi drone attack near the Abu Dhabi airport.

Tirumurti reiterated External Affairs Minister S. Jaishankar’s 8-point action plan to combatting terrorism, including summoning political will and not justifying terrorism or glorifying terrorists, no double standards and no good or bad distinction being made and not placing blocks and holds on listing requests without reason.

Tirumurti is currently Chair of the UN Counter Terrorism Committee (CTC) and said India will work closely with United Nations Office of Counter-Terrorism (UNOCT) and the UN Counter-Terrorism Committee Executive Directorate (CTED) and continue to take up this issue with all stakeholders so that a zero-tolerance approach to terrorism and its perpetrators becomes the norm of the international counter terror discourse.