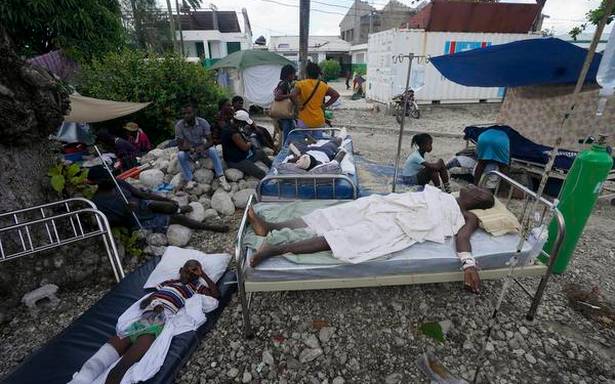 Tropical Storm Grace swept over Haiti with drenching rains just two days after a powerful earthquake battered the Caribbean nation, adding to the misery of thousands who lost loved ones, suffered injuries or found themselves homeless and forcing overwhelmed hospitals and rescuers to act quickly.

After nightfall, heavy rain and strong winds whipped at the country’s southwestern area, hit hardest by Saturday’s quake, and officials warned that rainfall could reach 38 centimeters in some areas before the storm moved on. Port-au-Prince, the capital, also saw heavy rains. Grace regained tropical storm status after previously falling to the level of a tropical depression.

The storm arrived on the same day that the country’s Civil Protection Agency raised the death toll from the earthquake to 1,419 and the number of injured to 6,000, many of whom have had to wait for medical help lying outside in wilting heat.

Grace’s rain and wind raised the threat of mudslides and flash flooding as it slowly passed by southwestern Haiti’s Tiburon Peninsula overnight before heading towards Jamaica and southeastern Cuba on Tuesday.

“We are in an exceptional situation,” Prime Minister Ariel Henry told reporters on Monday afternoon as the storm approached.

A hospital in the badly damaged town of Les Cayes was so crowded with patients after the earthquake that many had to lie in patios, corridors, verandas and hallways, but the approaching storm had officials scrambling to relocate them as best they could.

“We had planned to put up tents (in hospital patios), but we were told that could not be safe,” said Gede Peterson, director of Les Cayes General Hospital.

Quake victims continued to stream to Les Cayes’ overwhelmed general hospital, waiting on stair steps, in corridors and on an open veranda.

“After two days, they are almost always generally infected,” said Dr. Paurus Michelete, who had treated 250 patients and was one of only three doctors on call when the quake hit. He added that pain killers, analgesics and steel pins to mend fractures were running out amid the crush of patients.

Meanwhile, rescuers and scrap metal scavengers dug into the floors of a collapsed hotel in the coastal town, where 15 bodies had already been extracted. Jean Moise Fortunè, whose brother, the hotel owner and a prominent politician, was killed in the quake, believed there were more people trapped in the rubble.

As work, fuel and money ran out, desperate Les Cayes residents searched collapsed houses for scrap metal to sell. Others waited for money wired from abroad, a mainstay of Haiti’s economy even before the quake.