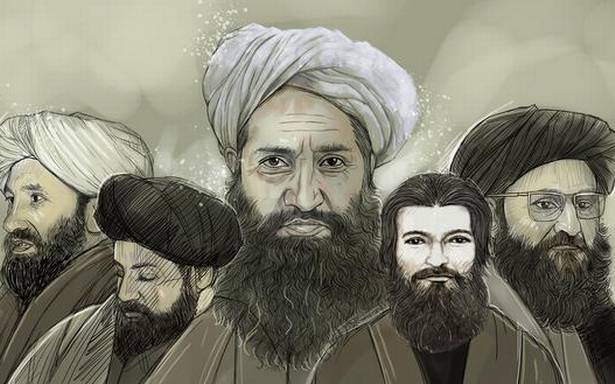 Almost all key portfolios of the new Taliban government are allocated to the militant group’s core leadership, including globally designated terrorists, and the Haqqani Network, which has deep ties with al-Qaeda and ISI

Mullah Hibatullah Akhundzada, the Taliban’s emir since 2016 (whom The Hindu profiled on August 22) will be the new ‘Emir al Momineen’ (commander of the faithful) of Afghanistan, a title Mullah Omar, head of the old Taliban regime, had assumed. While Akhundzada, who was the judicial chief of the previous regime, will have a final say in all matters related to governance, Mullah Hassan Akhund will run the day-to-day affairs of the government as acting Prime Minister. He will be joined by Mullah Abdul Ghani Baradar as Deputy Prime Minister, Sirajuddin Haqqani as Interior Minister, Mullah Muhammad Yaqoob as Defence Minister, Amir Khan Muttaqi as Foreign Minister and Khalil Haqqani as Refugee Minister. Here are details about some of the key leaders of the new Islamic Emirate.

When the UN issued an ultimatum to the Taliban regime in November 1999 to hand over Osama bin Laden, who was held responsible for the August 1998 bombing of the American embassies in Kenya and Tanzania that killed 244 people, to the U.S. for trial, Hassan Akhund was the Foreign Minister. The UN had threatened to impose sanctions on the Taliban regime unless Bin Laden was handed over. Akhund dismissed the UN demand, saying: “We will never give up Osama at any price.” Akhund said a Taliban inquiry had exonerated Bin Laden. Besides his role as the Foreign Minister, Akhund, a co-founder of the Taliban and a close associate of Mullah Omar, had also served as Deputy Prime Minister. According to the UN, Akhund was born in Pashmul village in Kandahar Province some time between 1945 and 1958. He was a governor of Kandahar and the political adviser of Mullah Omar. The UN placed Akhund on its blacklist of terrorists in 2001.

When the Taliban lost power, Akhund, with other top leaders, retreated from Kabul. By 2009-10, he had emerged as a top commander of the Taliban, which were trying to strike back and capture territories in Afghanistan. He also became a member of the Rahbari Shura, the Taliban’s supreme council, which was based in Quetta, Pakistan. By naming him the head of the government, the Taliban have stressed more on continuity from the previous Islamic Emirate than on change as many world leaders and analysts had hoped for.

Baradar has been the public face of the Taliban ever since the militant group started direct negotiations with the U.S. Born in 1968 in Uruzgan, Baradar had fought the communists along with Mullah Omar during the 1980s. In 1994, he co-founded the Taliban with Omar and had played a key role in the old regime as Deputy Defence Minister. When the Taliban government was toppled in 2001, Baradar fled to Pakistan, where he, along with other peers, rebuilt the militia as an insurgency.

When he was captured by American and Pakistani commandos in January 2010 in Karachi, Baradar was the operational commander of the Taliban. Back then, both Pakistan and the U.S. hailed his arrest as a breakthrough in the fight against terrorism. Later, Pakistani officials told the media that they detained Baradar, with help from the CIA, to shut down the secret talks he had initiated with the Afghan government of President Hamid Karzai.

Later, when the Trump administration was seeking a negotiated withdrawal agreement with the Taliban, it pressed Pakistani authorities to release Baradar, apparently because of his earlier willingness for talks. He was freed in 2018 and then became the head of the Taliban’s Doha political office. He led the negotiations with the U.S. that led to the February 2020 withdrawal agreement. Baradar will serve as the Deputy Prime Minister of the new Taliban regime.

In June this year, when the Taliban were making rapid inroads into Afghanistan’s countryside in the wake of the U.S. withdrawal, the UN’s Analytical Support and Sanctions Monitoring Team released a report claiming that there were deep ties between al-Qaeda and the Taliban. Sirajuddin Haqqani, leader of the Haqqani Network and one of the deputy emirs of the Taliban, is also “assessed to be a member of the wider al-Qaeda leadership, but not of the al-Qaeda core leadership (the Hattin Shura),” it said. The Haqqanis’ ties with al-Qaeda were hardly a secret. Sirajuddin’s father Jalaluddin Haqqani, the founder of the Network, was the top Taliban commander in 2001 when Bin Laden escaped the U.S.-led manhunt after the 9/11 attacks. Jalaluddin was one of the top commanders of the U.S.-backed anti-communist mujahideen in the 1980s. After his death, Sirajuddin rose to the leadership of the Network.

The Haqqanis, who enjoy close ties with Pakistan’s ISI, are blamed for several terror attacks, including the July 2008 Indian Embassy bombing in Kabul in which 58 people were killed. According to the FBI, Sirajuddin is a “specially designated global terrorist”, and the State Department has offered a reward of up to $10 million for information leading to his arrest. He is now the Interior Minister of Afghanistan, who will handle national intelligence as well as the police force. Khalil Haqqqani, another senior member from the Network, who is also a designated terrorist, is the Minister of Refugees, which means international organisations and NGOs wanting to deal with the refugee issue will have to deal with Khalil.

The oldest son of Mullah Omar, Yaqoob will be the acting Defence Minister of the new regime. Thought to be in his early 30s, Yaqoob’s name came to public attention after the Taliban confirmed the death of his father in 2015. The Taliban chose Mullah Mansour as their emir after Omar’s death and when Mansour was killed in an American air strike in 2016, Akhunzada became the new leader. Yaqoob, who was reportedly feuding with Mansour, rose steadily in the Taliban’s rank under Akhunzada’s leadership. He became the head of the military commission in 15 of Afghanistan’s 34 provinces where he oversaw the war. He was also a member of the Rehbari Shura, and became one of the two deputies of Akhundzada. After the Taliban captured Kabul on August 15, they released an audio clip of Yaqoob in which he praised the Taliban’s “martyrdom-seeking force” (suicide bombers). “All the people of Afghanistan must carry out the duty of jihadi training as much as possible, every citizen must be [a] capable military mujahid and must be ready at any moment to defend independence, land and the Islamic system,” he said.

Most others in the Cabinet also come from the Taliban’s core leadership. Seventeen of the 33 members are designated terrorists. Afghanistan, whose economy is almost entirely dependent on donations, is going through a severe crisis and the Taliban would need some international legitimacy to get funds. There are also civil society protests, mostly driven by women, across the country. Fighting in Panjshir is not over even though the Taliban have claimed control over the province. When the Taliban move to governance from fighting, a host of challenges are awaiting them.

The question, however, is whether the Taliban would be able to consolidate power and offer stability with a team of globally designated terrorists and a regime that resembles the brutal totalitarianism of the past.