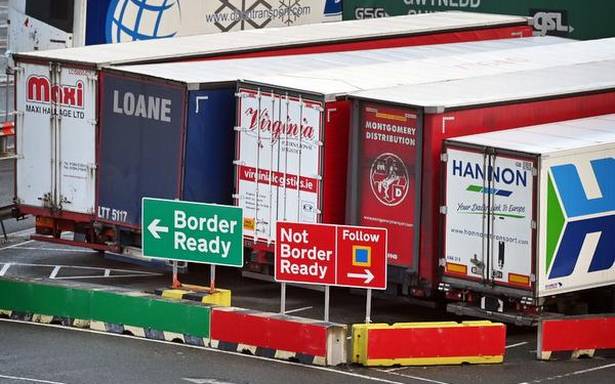 What are some new hurdles the U.K. will face? How serious could be the impact of the exclusion of services from the accord?

The story so far: British Prime Minister Boris Johnson signed the post-Brexit trade agreement with the European Union (EU) on Wednesday. The deal, announced on December 24, sets out the terms for Britain’s relationship with the EU after it left the trading bloc on January 31, 2020.

What are the main features of the agreement?

The U.K.-EU Trade and Cooperation Agreement, which came into force on January 1, 2021, retains the ‘zero tariffs’ and quotas trade regime of the past on all imports of goods. It thus averts the potentially catastrophic consequences for Britain of leaving the bloc without any agreement. A hard exit would have resulted in levies of 50% and higher and duties on dairy and food products, besides tariffs on manufactured goods, as per World Trade Organization rates. According to the U.K.’s fiscal watchdog, the Office for Budget Responsibility, the current arrangement could limit the potential economic impact from Brexit to a loss of 4% of the Gross Domestic Product over the medium term, compared to a possible 6% reduction had there been no agreement.

Northern Ireland will continue to remain within EU jurisdiction, avoiding a hardening of its border with the Republic of Ireland. On access for EU fisheries to British seas — a contentious issue — the agreement “recognises U.K. sovereignty over our fishing waters”.

What are some new hurdles the U.K. will face?

The latest agreement cannot shield Britain from a costly disruption to the frictionless trade flows during the past 47 years of its EU membership, because of its decision to leave the EU’s single market and customs union. An exit from the customs union means the return of customs controls at the U.K. borders and checks on rules of origin to prevent abuse of the zero-tariffs regime. The millions of customs declarations U.K. businesses will have to complete from now onwards is estimated to cost around £7 billion annually, according to HM Revenue & Customs.

How does the European Union plan to enforce a level playing field?

The U.K. is free to set its own standards on labour laws and environmental protection. Access to EU markets could, however, be restricted and tariffs imposed wherever arbitrators rule that businesses have been granted unfair advantage.

London has succeeded in breaking free from the jurisdiction of EU law and the European Court of Justice, which U.K. eurosceptics regard as an affront to national sovereignty. British and EU companies will be able to challenge state subsidies awarded to their rivals in relevant national courts if they suspect any violation of common provisions set out in the agreement.

How serious could be the impact of the exclusion of services from the accord?

As the services sector accounts for about 80% of the U.K.’s economy, the fallout from leaving it outside the purview of the new accord will be hard. The agreement covers data flows in some areas of policing and law enforcement, while decisions on personal data transmissions are to be dealt with separately. Given London’s status as the premier global financial hub, the exclusion of financial services from the agreement is likely to cause uncertainty.

Both sides have reached an understanding that the terms of access to each other’s markets would be subject to a unilateral declaration by one party that the regulatory framework of the other was equivalent to its own. Talks are said to begin this month to formulate a memorandum of understanding as a basis to strengthen mutual cooperation.

What does the future hold for relations between Britain and the EU?

Ever since the 2016 referendum to quit the EU, European leaders have been unequivocal in their opinion that any future relationship must entail huge costs of exit for the U.K., just as its 47-year membership of the bloc brought vast benefits. In the four-and-a-half years since the vote, Brussels has largely achieved its overarching objective of ensuring that Brexit does not set a precedent for other member states.

Conversely, Britain may discover that striking pragmatic compromises is the way forward to protect sovereignty and national self-interest. The latest agreement erects new barriers, rather than remove existing ones, in trade ties between London and Brussels. This peculiar and unprecedented character of the deal, as Pascal Lamy, former head of the WTO underscored, is a necessary and almost inevitable outcome of Brexit. Even so, this limited deal is better than a “no deal” for both parties. It lays the foundation for a future partnership between Brussels and London, based on the stringent terms imposed on Britain under the 2019 U.K. withdrawal agreement.