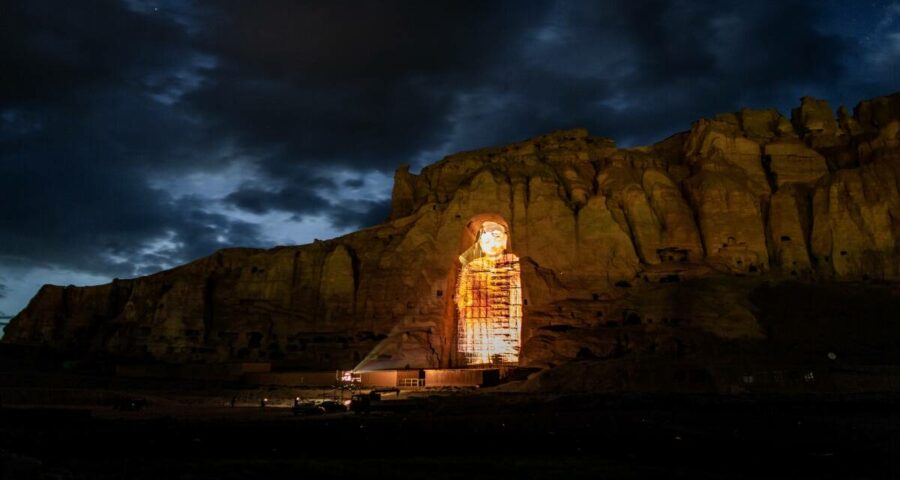 Cultural preservation experts continue to worry that the Taliban militants will target Afghanistan’s ancient heritage as they did the last time they controlled the country. Taliban officials have promised to protect the National Museum of Afghanistan in Kabul and its valuable collection of cultural artifacts, the museum’s director said in an interview Thursday.

The Taliban posted a small group of armed guards outside the museum to prevent looting, according to the director, Mohammad Fahim Rahimi, who said that he had met with Taliban officials Wednesday.

“Had there been fighting, it could have been a disaster and could have destroyed a lot of things here and many monuments throughout the country,” Rahimi said. “We are a bit fortunate for now that the change of power has not cost such death and destruction.”

“We still have great concern for the safety of our staff and our collection,” he added.

Caution seemed appropriate as scenes of chaos continued to emerge from Kabul, where thousands of people are continuing to crowd outside the airport in desperate bids to leave the country. Cultural preservation experts continue to worry that the Taliban militants will target Afghanistan’s ancient heritage as they did the last time they controlled the country, ransacking the museum and notoriously blasting with artillery and dynamite the giant Buddhas of Bamiyan, enormous statues that had been carved into a mountainside 1,500 years ago.

The museum, considered one of the world’s greatest repositories of ancient cultures, suffered greatly in the 1990s as civil war led to the looting and destruction of most of its buildings. After the Taliban were ousted in 2001, officials at the museum reported that the Taliban had confiscated or destroyed many thousands of objects in its collection — largely Buddhist statues and other relics that were deemed un-Islamic or idolatrous.

And certainly the concerns for cultural objects extend well beyond Kabul to regional museums and sensitive archaeological sites around the country, like Mes Aynak, in Logar province, where the remains of an ancient Buddhist city have yielded many archaeological treasures.

Even in cases where artifacts are not immediately threatened, experts worry about what will happen to cultural objects and sites that could suffer from neglect because delicate preservation projects are halted, or because of looting or the Taliban’s fundamentalist rejection of pre-Islamic or other art.

The Taliban have worked to present a public image that would assuage such fears, issuing a statement in February that vowed to protect the nation’s cultural heritage and ordering its members to prevent looting.

“As Afghanistan is a country replete with ancient artifacts and antiquity, and that such relics form a part of our country’s history, identity and rich culture, therefore all have an obligation to robustly protect, monitor and preserve these artifacts,” it said. “All Mujahideen must prevent excavation of antiquities and preserve all historic sites like old fortresses, minarets, towers and other similar sites,” it continued, “to safeguard them from damage, destruction and decay.”

In an interview last week from Doha, Qatar, with The Daily Mirror, a Sri Lankan news agency, Taliban spokesperson Suhail Shaheen said, “Buddhist sites in Afghanistan are not at risk; I refute any claim in this regard.”

Some experts hope the Taliban really have changed, and that they have a more sophisticated understanding that outrage over any large-scale cultural destruction would harm their relations internationally.

Cheryl Benard, director of the Alliance for the Restoration of Cultural Heritage, said the Taliban are nationalist and religious and should recognize the importance of the country’s treasures to the Afghan people. “Everybody is in a wait and see mode,” she said. “The biggest danger is that some renegade individual goes on a binge of destruction, but they seem astonishingly disciplined so far.”

Other experts, though worried, find some relief in the fact that much has improved in terms of documentation of Afghan cultural heritage in the past few years. Organizations have spent years “creating museum collection catalogs, archaeological sites maps, 3D models of heritage building, but also documenting intangible heritage, recording the movements of potters, the equipment of masons,” Bastien Varoutsikos, a cultural heritage expert, said by email.

In their conversations with Rahimi outside the National Museum earlier this week, the Taliban said they would not enter the institution where fighters once caused so much harm. During two decades of international occupation of Kabul, millions of dollars were spent refurbishing the museum, and Interpol and the U.N. Educational, Scientific and Cultural Organization helped recover a few thousand items that had made their way illegally into foreign museums or onto the international antiquities market.

Today the museum is considered a design gem as well as an important institution. Objects have been repaired, and the museum contains hand tools and other objects dating to the Stone Age, along with valuable wood carvings, statues and other artifacts from the Bronze, Buddhist, Hindu and Islamic periods.

Rahimi said the museum had drawn up a contingency plan for removing the 50,000 or so treasures in its collections to safe locations but had not put the plan into effect because of the Taliban’s rapid takeover.

In Bamiyan, the niches of the giant Buddhas stand empty as a reminder of the Taliban’s past contempt for outside cultures. In March, on the 20th anniversary of the destruction of the Buddhas, UNESCO helped sponsor a day commemorating the structures, featuring a life-size, full-color 3D projection of the statues into the rocky cliffside alcoves.

Bamiyan is the unofficial capital of the Hazaras, an ethnic minority persecuted by the Taliban in the past. Since taking power this time around, in a step that is being watched by experts concerned about cultural destruction, the militants recently blew up a statue in Bamiyan of the Shiite militia leader Abdul Ali Mazari, who was killed by the Taliban in 1995.

For now, experts hope that is an aberration, not an early indication that the group will start smashing cultural treasures again.

“We must remain hopeful that the February statement declaring a commitment to protect cultural heritage will be honored,” Bénédicte de Montlaur, president of the World Monuments Fund, said in a statement. “The entire world will be watching to see how it is followed through.”