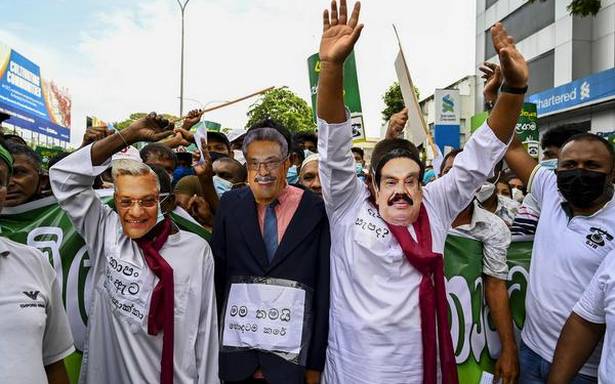 The SJB held a protest in Colombo with several thousands flocking to register a myriad of issues from high cost of living to shortage of essentials.

The police in Sri Lanka’s capital on Wednesday said legal action would be taken against the main Opposition party, the Samagi Jana Balawegaya (SJB), for defying pandemic health guidelines by holding a public anti-government protest.

The SJB held a protest in Colombo with several thousands flocking to register a myriad of issues from high cost of living to shortage of essentials.

SJB legislator Harsha de Silva said most of their activists were prevented from travelling by buses from the outer districts to the city by the police, who had placed roadblocks to turn back activists.

The SJB leader Sajith Premadasa vowed to take the fight to the government in his action termed as ending the ‘queue era’.

In the recent months, consumers were seen queuing up for essentials, which has now escalated to forming long lines by motorists to refuel at pumping stations.

“We are in the process of taking legal action,” police spokesman Nihal Thalduwa told reporters.

He said the protest was organised in violation of the pandemic health guidelines.

The SJB charged that the government had resorted to using health guidelines for political purposes by curbing democratic dissent.

The SJB accused him of being politically-sided with the ruling party.

The SJB claimed that the ruling SLPP held its annual convention with a big gathering recently. They were not made to adhere to health guidelines, the SJB claimed.

The government Parliamentarians accused the SJB of organising the protest to trigger another wave of the pandemic and thereby inconvenience the government.

The foreign exchange crisis and import restrictions have caused a shortage of essentials.

The government shut down the only crude oil refinery this week, citing dollar shortage to pay file oil shipments. However, refined petrol and diesel would be imported to meet the demand the government assured.