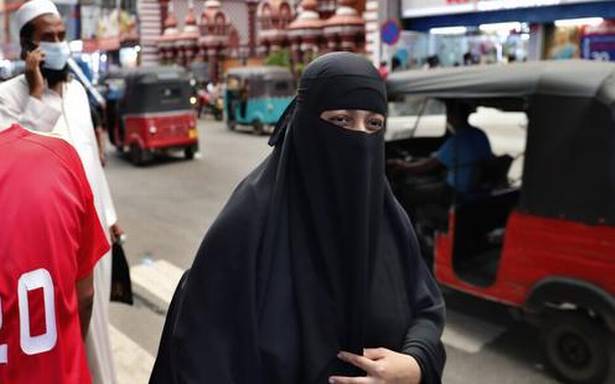 Draft law will be tabled in parliament, says cabinet spokesman

Sri Lanka’s Cabinet on Tuesday cleared a proposal to ban all forms of face veils in public places “due to national security concerns”.

“The Cabinet has approved the proposal…it will now go to the legal draftsmen and then be brought to parliament,” cabinet spokesman Keheliya Rambukwella told the weekly media conference.

The announcement comes at a time when the government is urging the public to wear face masks — dozens of violators have been arrested — to prevent the spread of COVID-19, and a likely third wave in Sri Lanka.

The proposal to ban the burqa was announced in March by Minister of Public Security Sarath Weerasekara, weeks before the UN Human Rights Council adopted a resolution on Sri Lanka. However, the government then clarified that it was only a proposal and there was no move to implement it in a hurry – a position that was widely interpreted as Colombo’s attempt to garner support of Muslim countries that had a vote at the Council.

The proposed ban on face veils, seen as targeting the burqa worn by Muslim women, had triggered concern domestically and among international actors. The Pakistani envoy in Colombo in a tweet then said the likely ban “will only serve as injury to the feelings of ordinary Sri Lankan Muslims and Muslims across the globe”.