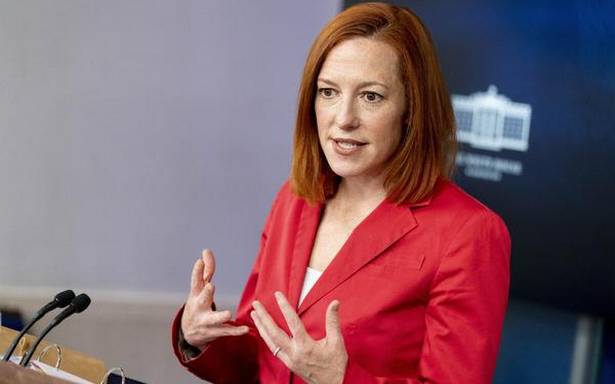 Secretary of State Antony Blinken and National Security Advisor Jake Sullivan are scheduled to hold talks with their Chinese counterparts in Anchorage, Alaska, on March 19

The Biden administration once again signaled that the Quad ( the Quadrilateral Strategic Dialogue between India, the U.S., Japan and Australia) is not a group about China and the agenda for Friday’s first ever Quad Summit meeting is not China-focused. However, the U.S. position that China is committing genocide against Uighur Muslims in its Xinjiang province will be raised by U.S. President Joe Biden when he meets virtually with Prime Minister Narendra Modi, Prime Minister Scott Morrison of Australia and Prime Minister Yoshihide Suga of Japan, Press Secretary Jen Psaki said at a press briefing.

Listen: What to expect from the first ever Quad summit | The Hindu In Focus Podcast

In response to a question on whether Mr. Biden would discuss with Quad partners, ways in which they could get China to stop the genocide against of Uighur Muslims, which the U.S. government has concluded is ongoing, Ms .Psaki said the topic would be raised directly with the Chinese next week but “certainly this conversation tomorrow.”

Secretary of State Antony Blinken and National Security Advisor Jake Sullivan are scheduled to hold talks with their Chinese counterparts in Anchorage, Alaska, on March 19.

Ms. Psaki was also quick to point out that Friday’s Quad agenda would be broader.

“But we expect the conversation tomorrow to be about a range of global issues. It’s not focused on China,” she said.

“ Of course China is a topic on the minds of many leaders and countries, but we expect they will talk about the climate crisis, about economic cooperation, about addressing COVID … a range of issues and discussions and certainly the position of the United States is that what is happening is genocide and we’ll look for opportunities to work with other partners on putting additional pressure on the Chinese but we’ll also raise it directly and it’ll be a topic of discussion next week,” Ms. Psaki said.

Also read | After the tsunami: how the ‘Quad’ was born

The Biden administration felt it was important to have the March 19 meeting on U.S. soil, Ms. Psaki said. Mr. Blinken and Mr. Sullivan will “not be holding back” on issues they have with the behaviour of Chinese leadership on Taiwan, recent efforts to push back democracy in Hong Kong or on concerns about the economic relationship, Ms. Psaki said.

“They will certainly raise those issues and the lack of transparency as it relates to COVID-19 (and) human rights abuses,” she said. Mr. Blinken and Mr. Sullivan are also expected to discuss ways in which China and the U.S. can cooperate with each other.