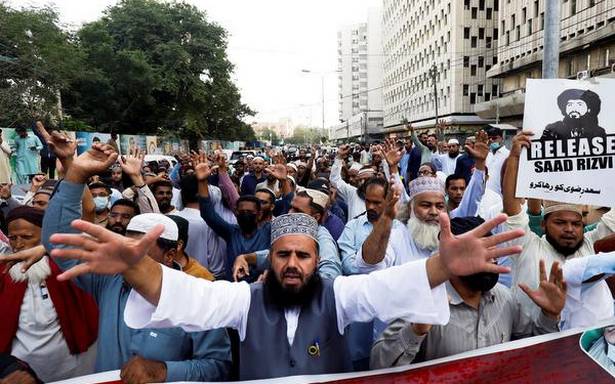 The TLP was declared as a proscribed organisation in April this year after violent protests by the group to force the government to expel the French ambassador over the issue of blasphemous cartoons published in France.

Pakistan Prime Minister Imran Khan on Saturday gave his permission to remove the extremist group Tehreek-i-Labbaik Pakistan (TLP) from the list of banned outfits, succumbing to the hardline Islamists to end the deadly anti-government agitation.

The TLP was declared as a proscribed organisation in April this year after violent protests by the group to force the government to expel the French ambassador over the issue of blasphemous cartoons published in France.

The group once again took to the streets last month and after violent protests entered into an agreement with the government. Though the details of the agreement were not shared with the public, it emerged from the statement of some leaders that it included the removal of a ban on the group.

At least 21 people, including 10 policemen have lost their lives during fierce confrontation between the TLP workers and law enforcement authorities in recent days.

Prime Minister Khan approved to lift the ban on the TLP after a report for it was sent by the Punjab government through the Ministry of Interior.

"The prime minister has been pleased to accord permission for submission of the instant summary to the cabinet through circulation under Rule 17 (1)(b) of the Rules of Business, 1973," according to an official document.

It added that "the approval of the cabinet is [now] solicited to de-proscribe the TLP under […] Anti-Terrorism Act, 1997 on the recommendation of the Punjab government." According to the Rules of Business, 1973, approval by circulation means that a summary is sent to federal ministers for their opinion. If a minister fails to respond within the stipulated time period, it is assumed that they have approved the report.

The government has already released more than 2,000 activists of the TLP and after lifting of the ban, the group would be free to take part in all sorts of political activities.

However, it would set a bad precedent and the future governments would be vulnerable to extremists groups and their bullying.

The TLP was established in 2015 and has held at least six protests over the years, mostly against the alleged desecration of the Prophet.