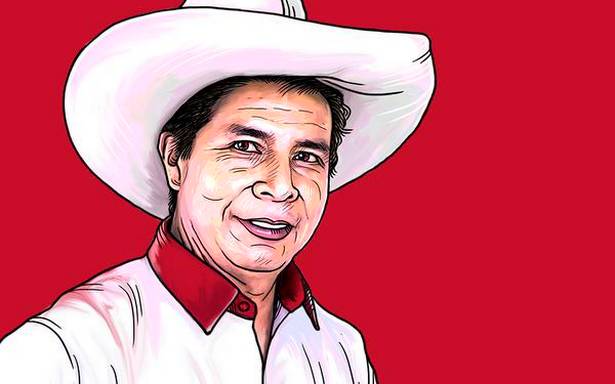 The narrow margin of her loss was disputed by Ms. Fujimori, who alleged that “votes were stolen from her party”. The daughter of convicted former President, Alberto Fujimori, she acknowledged her loss after it took weeks for the election authorities to reject her false claims that were straight from the copybook of ex-U.S. president Donald Trump.

Mr. Castillo delivered the third electoral defeat in the presidential polls to the Fujimori scion in what was clearly a mandate against the Peruvian elite. Ms. Fujimori’s party, the Popular Force, undertook a conservative-populist campaign that relied on social media bombardment of “fake news”, seeking to brand Mr. Castillo as a “radical communist”.

Mr. Castillo, a socialist and an agrarian leftist, was born in a poor peasant family in the socio-economically poor but mineral-rich northern region, Cajamarca, grew out of poverty as a teacher. As a social activist, he combated the Maoist Shining Path’s influence in the region. Later, he organised teachers’ unions and made a mark in the 2017 teachers’ strike that bargained for higher salaries and increases in the education budget.

The strike spread through Peru and finally then President Pedro Pablo Kuczynski took part in the negotiations that conceded benefits to the teachers, following which Mr. Castillo called off the strike.

Mr. Castillo ran as a candidate of the Peru Libre (PL) party, even though he is not a member of it. The party is led by Vladimir Cerron, who has a doctoral degree in medicine from Cuba. He was a former provincial Governor and had been convicted on charges of corruption that disallowed him from contesting elections.

The PL has a Marxist-Leninist party programme and is committed to nationalisation of strategic sectors such as mining, but Mr. Castillo has repudiated any links with communism and has instead articulated positions that talk of economic redistribution while holding social conservative positions.

His victory reminds some of another left-wing populist candidate, Ollanta Humala, who won the presidential polls in 2006 on a leftist platform. Mr. Humala later went on to govern from the political centre and tacked on to neoliberalism, before corruption scandals widely discredited his presidency.

Mr. Castillo, on the other hand, has promised that he will not acquiesce to the political elite or that he would seek to calm vested interests stoking fears about capital flight and stock market collapses.

Instead, he has argued for the need for constitutional reform through a popular constituent assembly that will orient the governing system towards one in which the state will have a greater role in the economy and a better balance with the private sector, drawing comparisons with former Bolivian President Evo Morales. Peru has suffered significantly from COVID-19. It is among the countries with highest per capita mortality rates, and has seen a severe economic contraction — GDP fell by 30.2% in the second quarter of 2020 and there has not been any significant improvement since then. Widespread anger against the centrist political parties in a country with loose party affiliations resulted in Mr. Castillo and Ms. Fujimori becoming the key candidates in the presidential elections.

Mr. Castillo garnered the support of the marginalised sections with strong endorsement in the “internal regions” of the country compared to Ms. Fujimori’s bases in Lima and in the more affluent coastal regions. The fragmented polity had resulted in a fractured verdict in the first round of elections with only Mr. Castillo, Ms. Fujimori and two others cracking more than 10% support in a crowded field.

The fractured verdict was mirrored in elections to the legislature, with traditional parties drawing a blank while the PL and Ms. Fujimori’s Popular Force won 37 and 24 seats, respectively, in the 130-member house.

Establishing a redistribution-based economic policy while retaining power through democratic means has been a challenge that was only partially successful in countries such as Ecuador and Bolivia. Mr. Castillo is now the new flag-bearer of what is popularly called “21st century socialism”.

Mr. Castillo’s presidential victory and the electoral gains made by the PL were a consequence of the poor and indigenous people of Peru flocking to vote in large numbers to back them, but his even his modestly ambitious ideas will be difficult to implement with the elite ranged against his socialist policies. With a close result in an election polarised between the socialist left and the conservative right that has unabashedly promised to re-usher the authoritarian and neoliberal policies of Alberto Fujimori, and an unstable economy devastated by COVID-19, Castillo’s first actions would be to secure stability and governance.

Relations between the legislature and the executive had frayed in the previous decade resulting in considerable political instability as well and Mr. Castillo’s key task would be to rely on political allies such as Veronika Mendoza’s New Peru movement who has sought to ensure that Castillo and the PL will commit themselves to safeguarding democratic institutions.