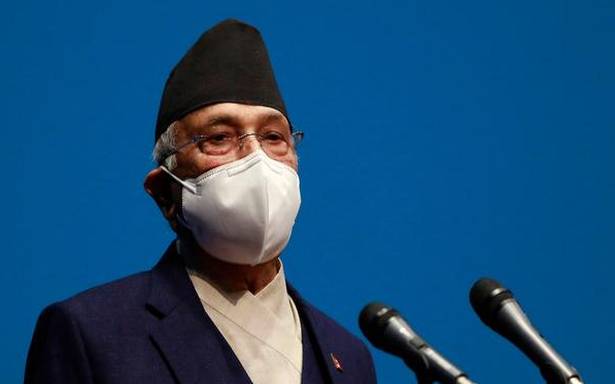 However, as per rules, Mr. Oli is required to win the vote of confidence within 30 days from the date of the appointment.

K P Sharma Oli was reappointed as Nepal Prime Minister on Thursday after the Opposition parties, riddled by factionalism, failed to secure majority seats in Parliament to form a new government.

Nepal President Bidya Devi Bhandari had asked the Opposition parties to come up with the support of majority lawmakers to form a new government by 9 p.m. on Thursday after Mr. Oli, 69, lost a crucial trust vote on Monday.

The Nepali Congress (NC) under the leadership of party president Sher Bahadur Deuba on Tuesday had announced its intention to stake a claim for the prime minister’s post.

Though Mr. Deuba had received support from Communist Party of Nepal (Maoist) chairman Pushpa Kamal Dahal ‘Prachanda’, a meeting of current and former NC office bearers at the party president’s residence on Thursday concluded that the sharp division within the Janata Samajbadi Party (JSP) whether to support the NC-led government had made the formation of an alternative government impossible.

Following the Opposition’s failure to prove its majority in Parliament, Mr. Oli is expected to stake his claim to form the government.

Subsequently, President Bhandari reappointed Mr. Oli, whose party has 121 seats in Parliament, as the prime minister. He will take the oath of office tomorrow.

However, as per rules, Mr. Oli is required to win the vote of confidence within 30 days from the date of the appointment.

The NC had earlier planned to form a new government with the support of Communist Party of Nepal (Maoist Centre), JSP and the Madhav Kumar Nepal-led faction of the ruling NCP-UML (Unified Marxist-Leninist).

The plan failed to materialise as there was an agreement between chairman Mr. Oli and rival faction leader Nepal within the UML and Upendra Yadav and Baburam Bhattarai-led faction of the JSP failed to secure a majority in the party.

Oli and Nepal had held a four-hour-long meeting to resolve their differences amid the threat of lawmakers close to the Nepal-led faction in the party to resign en masse if their demands were not met. The two leaders have agreed to form a 10-member task force to settle the differences seen in the party.

Nepal plunged into a political crisis on December 20 last year after President Bhandari dissolved the House and announced fresh elections on April 30 and May 10 at the recommendation of Prime Minister Oli, amidst a tussle for power within the ruling Nepal Communist Party (NCP).

Mr. Oli’s move to dissolve the House sparked protests from a large section of the NCP led by his rival ‘Prachanda’.

In February, the apex court reinstated the dissolved House, in a setback to Mr. Oli who was preparing for snap polls. Known for his pro-China stance, Mr. Oli had earlier served as the country’s prime minister from October 11, 2015 to August 3, 2016 during which Kathmandu’s ties with New Delhi had strained.