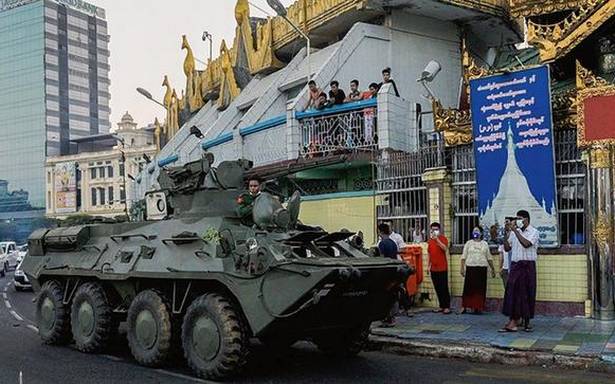 Much of the country has been in uproar since last week when soldiers detained Aung San Suu Kyi and ousted her government, ending a decade-old fledgling democracy after generations of junta rule.

Security forces have stepped up arrests of doctors and others joining a civil disobedience movement that has seen huge crowds throng streets in big urban centres and isolated frontier villages alike.

Police are now hunting seven people who have lent vocal support to the protests, including some of the country’s most famous democracy activists.

“If you find any fugitives mentioned above or if you have information about them, report to the nearest police station,” said a notice in the state media on Sunday.

“Those who receive them will [face] action in accordance with the law.”

Among the list of fugitives was Min Ko Naing, who spent more than a decade in prison for helping lead protests against an earlier dictatorship in 1988. “They are arresting the people at night and we have to be careful,” he said in a video published on Facebook on Saturday, skirting a junta ban on the platform, hours before his arrest warrant was issued.

The 1988 protests vaulted Ms. Suu Kyi to the top of Myanmar’s democracy movement, and the Nobel laureate spent years under house arrest as a prisoner of the generals.

She has not been seen in public since she was detained on February 1 alongside top aides. Nearly 400 others have been arrested in the days since, including many of Ms. Suu Kyi’s top political allies, according to the Assistance Association for Political Prisoners monitoring group.