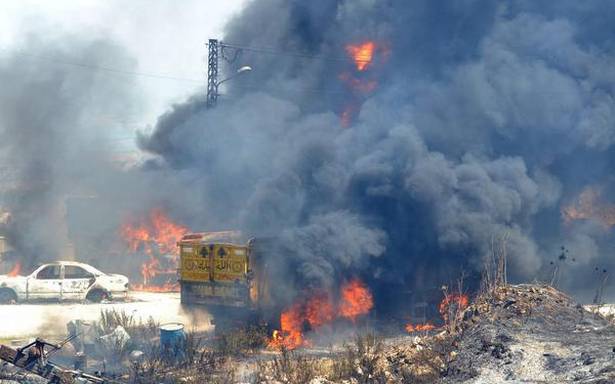 ‘Residents had gathered around the container to fill the fuel’

An adviser to the Health Ministry said the death toll from the blast in Al-Tleil village had climbed to 28.

The military said a fuel tank that “had been confiscated by the Army to distribute to citizens” exploded just before 2 a.m. Soldiers were among those hurt.

The Army began raiding gas stations on Saturday to curb hoarding by suppliers after a central bank decision to scrap fuel subsidies.

The official National News Agency (NNA) said the blast followed scuffles between “residents that gathered around the container to fill up gasoline” overnight.

Unable to seek treatment in Akkar, Ismail al-Sheikh, 23, who sustained burns to his arms and legs, was driven by his sister Marwa to the Geitawi hospital in Beirut, some 80 km away.

“At night, we were informed that the Army was distributing gasoline… so people flocked to fill it in plastic containers… straight from the tank,” Ms. Marwa said. “Most people who were there said that someone had thrown a lighter on the floor causing a fire that sparked the explosion.”