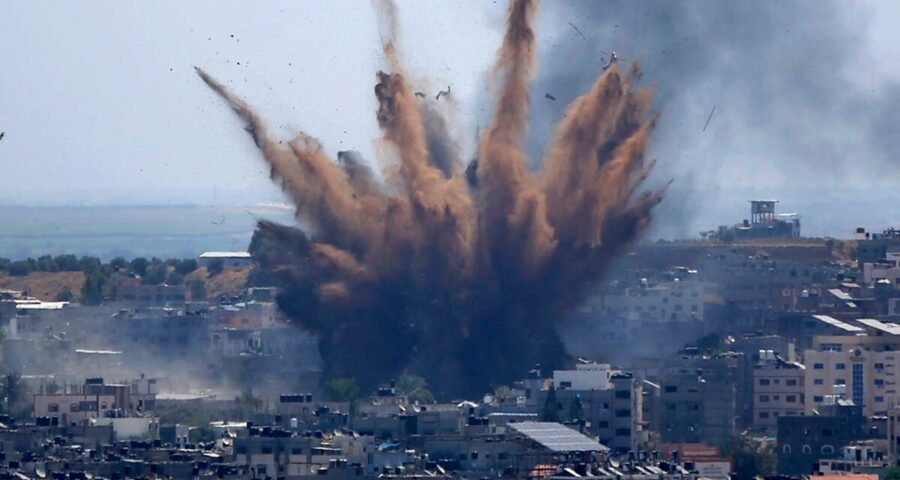 The Gaza Health Ministry put the death toll in the densely populated enclave of 2 million Palestinians at 197, including 58 children and 34 women. Ten people have been killed in Israel, including two children, Israeli authorities say.

Israel launched dozens of air strikes in Gaza and the Hamas militant group kept up its rocket attacks on Israeli cities in fighting that spilled into a second week on Monday.

International calls mounted for a ceasefire, but there was no sign of any imminent end to the most serious hostilities between Israel and Gaza’s ruling Hamas Islamists in years.

Roads, security buildings, militants’ training camps and houses were bombed in Israeli attacks that seemed to be focused on Gaza City, witnesses said. The sound of explosions echoed in many part of the Palestinian enclave overnight.

The Israeli military said fighter jets struck “terror targets”, after rocket barrages from Gaza were fired at the Israeli cities of Beersheba and Ashkelon just after midnight. 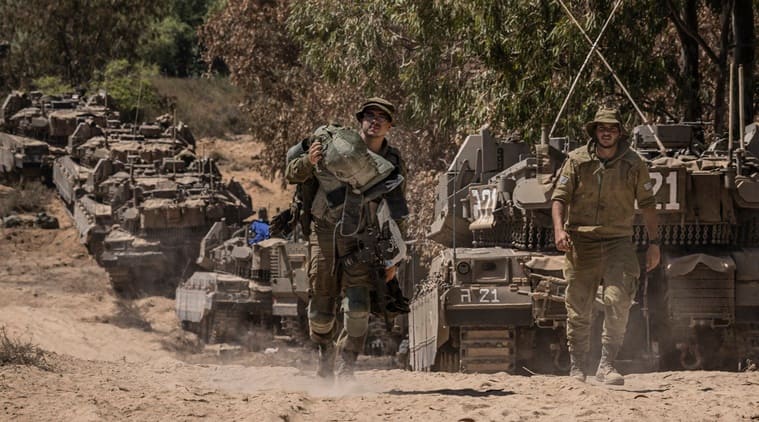 There were no immediate reports of casualties on either side of the border. World concern had already deepened after an Israeli air strike in Gaza that destroyed several homes on Sunday and which Palestinian health officials said killed 42 people, including 10 children, and persistent rocket attacks on Israeli towns.

Injecting more urgency into Washington’s calls for calm, U.S. Secretary of State Antony Blinken wrote on Twitter: “All parties need to deescalate tensions – the violence must end immediately”, after he spoke with Egypt’s foreign minister about ongoing violence in Israel, Gaza and the occupied West Bank.

At a meeting on Sunday of the UN Security Council, the United States said it has made clear to Israel, the Palestinians and others that it is ready to offer support “should the parties seek a ceasefire”.

Prime Minister Benjamin Netanyahu said Israel’s campaign in Gaza was continuing at “full force”, and that deterrence had to be achieved to prevent future conflict with Hamas, which rules Gaza.

“We are acting now, for as long as necessary, to restore calm and quiet to you, Israel’s citizens. It will take time,” Netanyahu said in a televised address after his security Cabinet met on Sunday.

The Gaza Health Ministry put the death toll in the densely populated enclave of 2 million Palestinians at 197, including 58 children and 34 women. Ten people have been killed in Israel, including two children, Israeli authorities say.

Hamas began its rocket assault last Monday after weeks of tensions over a court case to evict several Palestinian families in East Jerusalem, and in retaliation for Israeli police clashes with Palestinians near the city’s Al-Aqsa Mosque, Islam’s third holiest site, during the Muslim holy month of Ramadan.

US President Joe Biden said his administration is working with all parties towards achieving a sustained calm.

“We also believe Palestinians and Israelis equally deserve to live in safety and security and enjoy equal measure of freedom, prosperity and democracy,” he said in a pretaped video aired at an event marking the Muslim Eid holiday on Sunday. 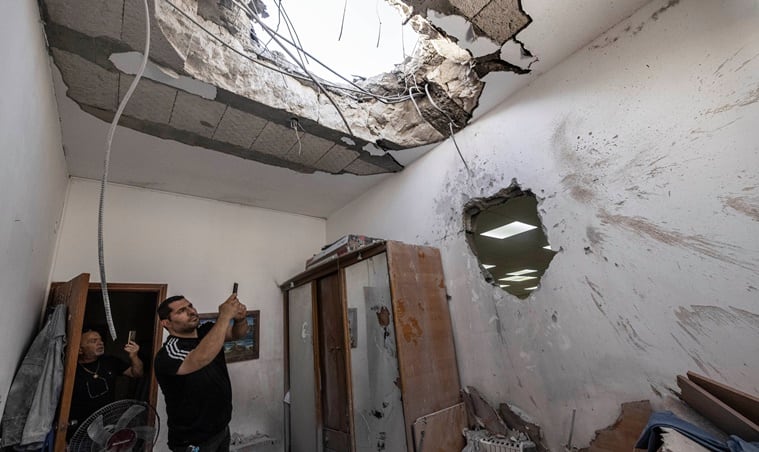 In New York, UN Secretary-General Antonio Guterres told the Security Council that hostilities in Israel and Gaza were “utterly appalling” and called for an immediate end to fighting.

He said the United Nations was “actively engaging all sides toward an immediate ceasefire” and urged them “to allow mediation efforts to intensify and succeed.” UN envoys have helped to mediate past truces between Israel and Hamas.

Washington, a strong ally of Israel, has been isolated at the United Nations over its objection to a public statement by the Security Council on the violence because it worries it could harm behind-the-scenes diplomacy.

Jordan’s King Abdullah said his kingdom was involved in intensive diplomacy to halt what he characterised as an Israeli military escalation. The monarch, whose ruling family has custodianship of Muslim and Christian sites in Jerusalem, did not elaborate. Israel and Jordan made peace in 1994.The Israeli military said that Hamas, an Islamist group regarded by Israel, the United States and the European Union as a terrorist movement, and other armed factions have fired more than 2,800 rockets from Gaza over the past week.

That is more than half the number fired during 51 days in a 2014 war between Hamas and Israel, the military said, and more intensive even than Hezbollah’s bombardment from Lebanon during the 2006 war between Israel and the Iran-backed Shi’ite group.

Many of the rockets have been intercepted by an Israeli anti-missile system, while some have fallen short of the border.

Hamas said its latest attacks were in retaliation for Israel’s “ongoing aggression against civilians”, including the air strike in Gaza City on Sunday that destroyed a number of homes.

The Israeli military said civilian casualties were unintentional and that its jets attacked a tunnel system used by militants, which collapsed, bringing the homes down. Hamas called it “pre-meditated killing”.

On US network CBS’ “Face the Nation” programme, Netanyahu defended another Israeli air strike a day earlier that destroyed a 12-storey building where the Associated Press and the Al Jazeera TV network had offices. 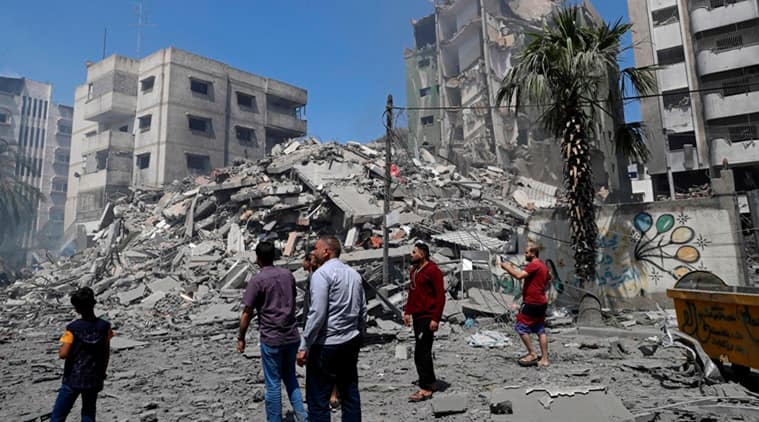 He said the structure also housed the militant group’s intelligence office and was thus a legitimate target. He said Israel had passed information about the building to US authorities. A US intelligence official did not respond to a request for comment.

Israel had given advance warning to occupants to leave. The Associated Press has condemned the strike and called on Israel to present evidence that Hamas was in the building.

Biden’s envoy, Hady Amr, arrived in Israel on Friday for talks, and an official with first-hand knowledge of his meetings said on Sunday that he reiterated “full US support” for Israel’s right to defend itself.

Amr also made clear that Washington understood that “this is clearly not something that can be wrapped up in 24 hours,” said the official, who asked not to be identified.

The envoy also addressed the White House’s Eid event from Jerusalem, saying his mission was to “ease tensions and end the crisis as soon as possible” because “far, far, far too many Palestinians and Israelis, including children, have died.”