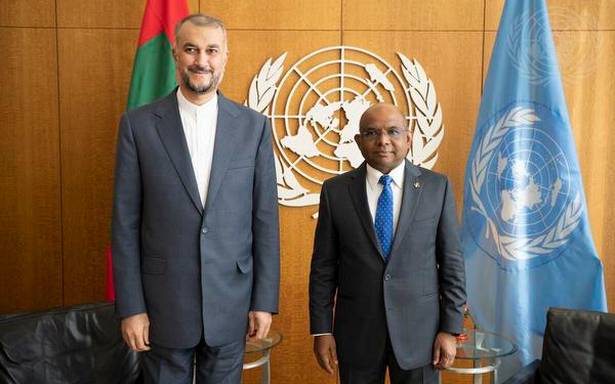 Iran has been unable to obtain tens of billions of dollars of its assets in foreign banks, mainly from exports of oil and gas, due to U.S. sanctions on its banking and energy sectors

Iran’s Foreign Minister said on October 2 that U.S. officials tried to discuss restarting nuclear talks last month, but he insisted Washington must first release $10 billion of Tehran’s frozen funds as a sign of good will.

Iran has rejected direct talks with the United States, and indirect talks on reviving a 2015 nuclear accord aimed at keeping Iran from being able to develop a nuclear weapon stopped in June.

Iran has been unable to obtain tens of billions of dollars of its assets in foreign banks, mainly from exports of oil and gas, due to U.S. sanctions on its banking and energy sectors.

"The Americans tried to contact us through different channels [at the U.N. General Assembly] in New York, and I told the mediators if America’s intentions are serious then a serious indication was needed … by releasing at least $10 billion of blocked money," the Minister said.

"They are not willing to free $10 billion belonging to the Iranian nation so that we can say that the Americans once in the past several decades considered the interests of the Iranian nation," Mr. Amir-Abdollahian said in the TV interview.

Western powers have urged Iran to return to negotiations and said time is running out as Tehran’s nuclear programme is advancing well beyond the limits set by the deal.

Mr. Amir-Abdollahian reiterated that Iran would "soon" return to the stalled nuclear talks in Vienna, declining to give a date.

Tehran says its nuclear steps are reversible if Washington lifts all sanctions. Iranian and Western officials have said many issues remain to be resolved before the accord can be revived.