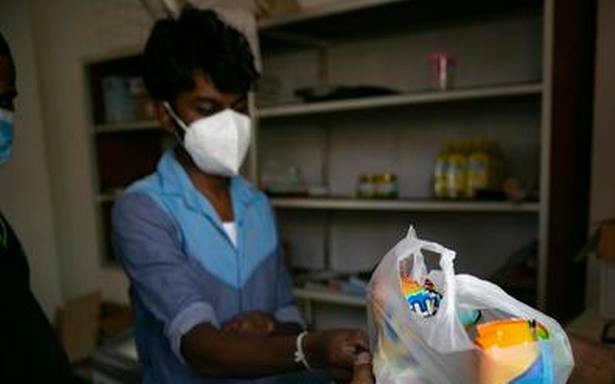 India on Thursday confirmed a $400 million currency swap with Sri Lanka while deferring another $500 million due for settlement to the Asian Clearing Union (ACU), in a move aimed at helping the island nation witnessing an unprecedented economic crisis.

In a tweet on Thursday, the Indian mission in Colombo said High Commissioner Gopal Baglay met Central Bank Governor Ajith Nivard Cabraal and expressed “India’s strong support to Sri Lanka” in the wake of the Reserve Bank of India extending facilities of $900 million over the last week.

“Had an excellent discussion with Indian High Commissioner to #SriLanka HE Gopal Baglay at my office this morning where he confirmed the #SAARC #SWAP by RBI and other forms of bilateral cooperation,” Mr. Cabraal said in a tweet.

India’s assistance follows a request from Sri Lanka during Finance Minister Basil Rajapaksa’s visit to New Delhi in December, for emergency financial assistance, including Lines of Credit for importing essentials and a currency swap to boost Sri Lanka’s draining foreign reserves. Sri Lanka is facing a severe dollar crunch that economists say might lead to a default on external debt and create a food shortage in the imports-reliant island nation. Colombo must service over $7 billion outstanding debt in 2022, including bond repayments of $500 million in January and $1 billion in July.

The Central Bank of Sri Lanka has expressed confidence about paying off the foreign debt. Ruling out an IMF bailout, Governor Cabraal on Wednesday said Colombo is in talks with Beijing for a new loan, in addition to the $500 million loan and $1.5 billion currency swap extended by Beijing as pandemic-time support. The request, according to local media reports, was also discussed during Chinese Foreign Minister Wang Yi’s visit to Colombo last week. Sri Lanka owes China over $5 billion already, and Colombo has requested Beijing to restructure it to provide some relief.

The developments have prompted political commentators in Sri Lanka to pit India and China against each other, in providing timely assistance to the island nation.

In July 2020, the RBI extended a similar swap facility — of $400 million — to help Sri Lanka cope with the impact of the first wave of the pandemic, and later provided a three-month roll over until February 2021, when the Central Bank of Sri Lanka settled it.

Thursday’s announcement on RBI assistance includes deferring the payment of $500 million that Sri Lanka owes to the ACU, a regional initiative with the Central Banks and Monetary Authorities of Bangladesh, Bhutan, India, Iran, Maldives, Myanmar, Nepal, Pakistan and Sri Lanka.

Significantly, India’s confirmation of the swap comes a week after the two countries signed a long-pending agreement on jointly developing the strategically located Trincomalee oil tank farm along the north-eastern coast of the island. Diplomatic sources had earlier indicated that any financial support from New Delhi to Colombo would have to follow the signing of the deal. While RBI’s assistance seeks to help Sri Lanka meet its immediate challenge, the Trincomalee project has long-term implications both, in terms of investment from New Delhi and its strategic interests in the Indian Ocean.

“India ranks third in the world in oil consumption, and it is predicted that India’s requirement will increase 50 % by the year 2030. Keeping these realities in mind, we have to appreciate what developing the Trincomalee facility can bring to each of our countries, and to the bilateral relationship,” said Milinda Moragoda, Sri Lanka’s High Commissioner to New Delhi.

Apart from the obvious potential for storage in Trincomalee, the recent agreement gives both countries an opportunity to elevate “transactional” ties to a more “strategic level”, he told The Hindu, recalling a proposal made in the “roadmap" on bilateral ties he presented while taking charge in New Delhi last year.

Much would depend on putting in place a business plan swiftly, Mr. Moragoda emphasised. As per the agreement, Indian Oil Corporation subsidiary Lanka IOC would operate 14 tanks for 50 years, the Ceylon Petroleum Corporation would run 24 tanks, while a joint venture set up by the CPC with Lanka IOC would operate 61 tanks in the facility spanning some 850 acres. Refurbishing each tank is expected to cost at least $ 100 million. “The sooner we evolve a sound business plan, the better this project will work for both countries,” he said.