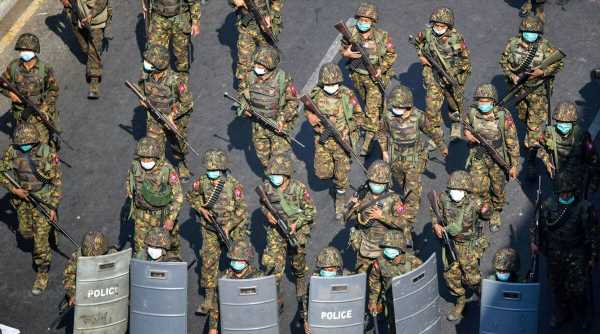 According to DW's three sources, soldiers are fed a steady stream of propaganda that views the Tatmadaw as the guardian of the embattled Buddhist nation of Myanmar. 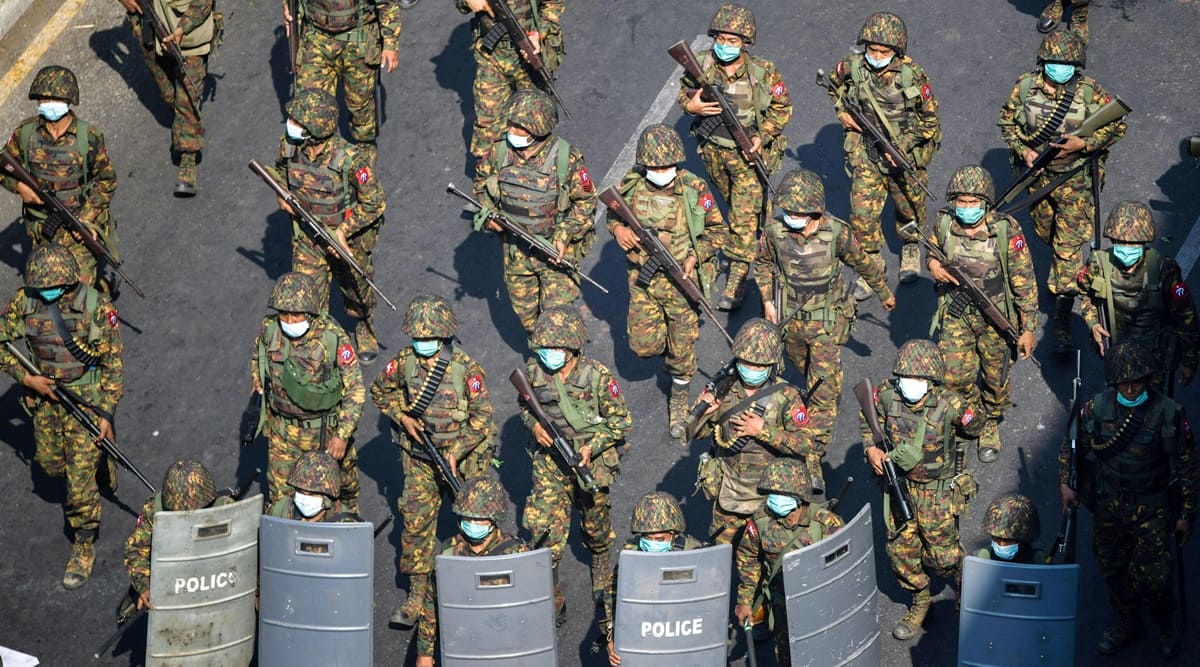 The Tatmadaw, Myanmar’s powerful army, controls every aspect of its soldiers’ lives. And those who leave pay a heavy price. DW spoke to three defectors.

As he witnessed the brutal crackdown on unarmed civilians protesting the army’s takeover, the young lieutenant felt increasingly disgusted. Soon after, he left without saying goodbye to his parents, fleeing the country first on motorbike and then on foot, aided across the border by local villagers.

Along the way, he stuck to smaller roads, carefully avoiding checkpoints and detection.

For if caught, he knew he would pay a heavy price for his desertion: In Myanmar, army defectors are usually sentenced to death — which is then commuted to life in prison, as the death penalty has not been carried out in over three decades.

That could, however, change as the army faces opposition within its ranks to its power grab.

The lieutenant is one of three defectors DW has spoken to in recent weeks, exchanging almost daily messages with them. The man, who peppers his messages with laughing emojis, is in hiding in India. The other two, both high-ranking officers, are on the run in Myanmar, moving from one safe house to the next. Their accounts provide rare insight into an otherwise opaque institution that is known for committing gross human rights violations against its own citizens — and shows the army’s stranglehold on soldiers’ lives, minds and, DW has learned, also finances. 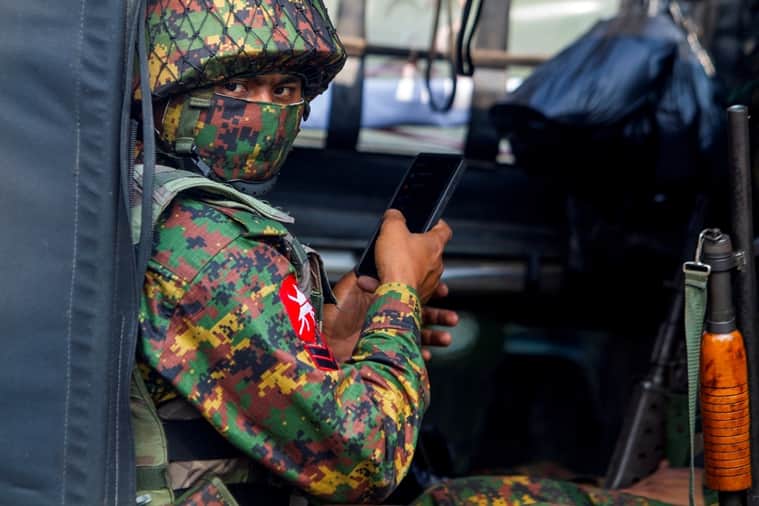 The interviews were conducted via messenger apps, including patchy video and audio calls, given that the army’s ongoing internet crackdown hampers most communication with the outside world.

DW has not been able to independently verify their accounts, but the interviews corroborate each other in key aspects. In two cases, military identification cards were shown.

Their identities are not disclosed in this report due to fears for the defectors and their families’ safety.

The three men describe a cloistered, strictly controlled life, based on a stringent, overarching hierarchy. Soldiers, they say, are required to live on army bases and are only allowed to leave if granted permission by superiors. The army dictates what soldiers and their families “wear, say and believe in, even how to decorate your home,” one man said. “They can check your house at any moment,” he added.

The wives of soldiers, he explains, are not allowed to wear the color red, which is associated with Aung San Suu Kyi’s National League for Democracy (NLD), or spout any other political symbols.

“Everything is monitored,” says another defector, who was deliberate with each word used to recount his experience. “They want to turn people into robots, who don’t think (for themselves).” 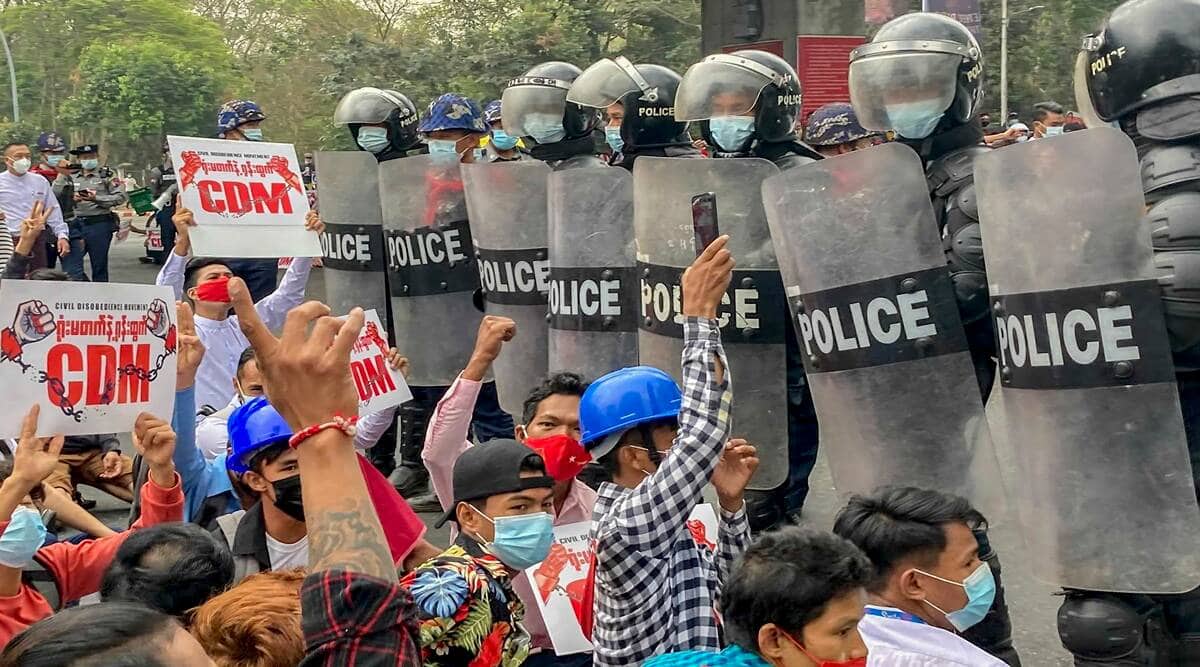 “If people post political things, they can be arrested and put in jail for three or four weeks,” one defector tells DW. Another says that soldiers have been denied promotions after sharing social media posts criticizing the leadership of the Tatmadaw — as Myanmar’s military is known — or voicing support for the NLD party.

One man recalls taking part in a training course a few years ago, where officers were shown how to tap into CCTV and intercept phone calls using Russian and Chinese technology — although he did not know the extent of surveillance.

Low-ranking soldiers, one defector says, were treated “like slaves,” with their wives forced to clean high-ranking officers’ homes without pay. Another said he had witnessed a superior asking the wife of a low-ranking soldier to give him a massage. He says the woman acquiesced, knowing that refusing could have negative repercussions for her husband.

According to DW’s three sources, soldiers are fed a steady stream of propaganda that views the Tatmadaw as the guardian of the embattled Buddhist nation of Myanmar. The enemies, according to this propaganda, are made up of a shadowy cabal of Muslims, Aung San Suu Kyi and her NLD party, who are bent on destroying the Buddhist country.

It’s an ideology that has been forged in a decades-long, at times brutal battle against a myriad of ethnic insurgencies that have been fighting for independence from the Burmese majority and, at times, each other.

In Myanmar, a state with 135 different ethnic groups, where roughly 90% of the population adheres to Buddhism, politics and religion are closely interwoven. Generals have long built pagodas, erected Buddha statues, and paid homage to influential monks to legitimize their claim to power as a unifying force. Anti-Muslim sentiments are widespread, which the Tatmadaw is adept at exploiting for political capital.

And this anti-Muslim, Buddhism-first propaganda is instilled into soldiers of all ranks. Soldiers, one source says, are being “brainwashed” into buying the army’s worldview. Another said while he did not believe the propaganda, he did not speak out against it, for fear of being punished. One defector recalled how he had been verbally abused when he dared to question the narrative that Rohingya — a Muslim minority long denied full citizenship rights — were “terrorists” bent on destroying the country and that they had no place in Myanmar.
One of the men, who, like many officers hails from a military family and had grown up on an army base, said that he had long believed the Tatmadaw’s propaganda: When friends dared to question the army, he would defend the military, recalling his anger at anyone who spoke negatively of the institution he had been taught to revere.

His views, he said, only changed following the coup when he witnessed the army’s crackdown on peaceful protesters — unarmed men, women and children that the army labels “terrorists.”

Myanmar army is a state within the state

The Tatmadaw’s outsized role is intertwined within Myanmar’s political and economic life — a lucrative advantage that succeeded colonial rule.

Following independence from Britain in 1948, a military junta took control in 1962, ushering in a prolonged period of iron-fisted rule characterized by strict censorship, imprisonment of opponents and international isolation.

While in power, the army — as well as individual officers and their families — amassed great wealth. This included land, economic and financial assets.

The generals only eased their grip on power in 2010, which culminated in elections that allowed for Aung San Suu Kyi’s NLD party to form a government.

Even after ceding some control to elected politicians, it continues to play a vast role in both the political and economic field: The constitution guarantees the military 25% of parliament seats, meaning that the army can block any constitutional amendments it dislikes.

It also retains control of important ministries, including defense and home affairs.

Likewise, it continues to own and run a myriad of lucrative business interests without any independent oversight. The Tatmadaw runs its own schools, universities, hospitals and court system.

In short: The army has established what is basically a powerful state within the state. And, since the coup, the army is now formally back in power.

In absolute terms, the Tatmadaw, a professional army, is the 11th largest army in the world, with some 406,000 soldiers in active duty as of 2019, according to the International Institute for Strategic Studies.

The Tatmadaw not only tries to control soldiers’ ways of thinking — but also their finances. Military personnel of all ranks, DW has learned, are forced to support military-owned companies through two mandatory schemes: This includes, the three defectors say, requiring soldiers to sign up for a life insurance policy with Aung Myint Moh Min Insurance Company Ltd. The policy, which they are forced to select, renews automatically every five years — with no way for soldiers to opt-out. ­­

The company did not respond to DW’s requests for comment.

Soldiers are also forced to make mandatory payments into MEC and MEHL, which are converted into shares. In return, soldiers receive a small dividend every year, defectors say.

It is likely a way to both generate revenues for the military and individual generals — whilst buying loyalty. Many high-ranking officers upon retirement are often awarded posts in the two holdings, their subsidiaries and affiliated companies. Others are given posts in the civilian administration.

The army does not respond kindly to those who attempt to leave its fold. One of the defectors tells DW that soldiers “cannot leave the army.”

In theory, another explained, soldiers can submit a letter of resignation after 10 years. “But that is only in the law,” he explained drily. “In practice, it is not easy and it takes three to four years to submit the process (of leaving the army).” And even then, he added, it was not a given that the army would let the soldier go.

He says he regrets his decision to join the army in the first place.

The Myanmar Embassy in Berlin did not respond to DW’s request for comment.

All three men are aware of the Tatmadaw’s reach, as the army pursues defectors. One man says he had heard from a contact in the Tatmadaw’s headquarters that it had compiled a list of some 300 defectors and was going after them and their families. It was, he says, “a manhunt.”

DW cannot verify the claim, however, given that the authorities have compiled a wanted list of activists and journalists that is broadcast every night on state television, it’s likely that the same is happening with army defectors.

One man describes how his family receives threatening phone calls. “They said: Where is your son? If you support him, you will get arrested.” Soon after, he severed all communication with his family, fearing for their safety.

Another source refuses to acknowledge whether he is still in contact with his family, fearing it would risk their safety.

Despite all the high risks, one defector has no regrets. Life on the run and hiding in a different house each night to keep safe is, for him, a consequence of maintaining integrity. He stands by his decision to leave the army he had served for so many years, saying he did not want his future children to “think I did nothing to stop this illegal coup.”