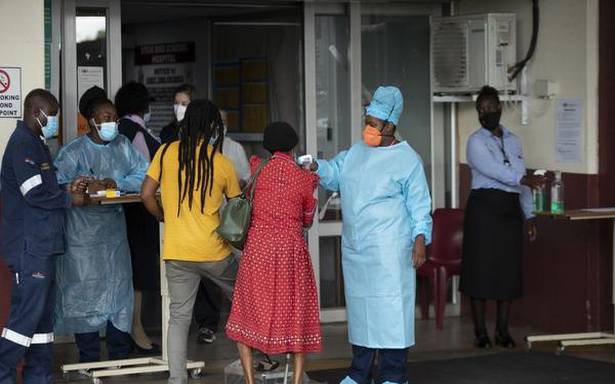 There were 339 more coronavirus deaths overnight across the country.

South Africa will close border posts with neighbouring countries for entry and departure as cases surge due to the new coronavirus variant, President Cyril Ramaphosa has announced.

In a national broadcast on Monday evening, Mr. Ramaphosa scotched widespread speculation that there would be a move to Level 4 restrictions due to the rising infections and deaths, especially as people return home and to work following the festive season.

He said the current Level 3 would continue until it was deemed safe to remove some of the restrictions, such as the ban on sale and movement of alcohol and a prohibition on public gatherings, except for funerals with strict protocols observed.

There were 339 more coronavirus deaths overnight across the country.

“The coronavirus storm is far fiercer and much more destructive than anything we have known before. We are now in the centre of that storm,” Mr. Ramaphosa said. “We do not know how much longer it will last or how much worse it will get, but we know what we need to do to weather this storm and to survive.”

“It’s necessary to keep the alert level 3 measures in place until we have passed the peak of new infections and we are certain that the rate of transmission has fallen enough to allow us to safely ease the current restrictions,” he said.

The President elucidated the decision on the border closure following severe congestion at border posts with neighbouring countries, especially Zimbabwe and Mozambique, as thousands of people tried to re-enter South Africa in the past fortnight.

“This (congestion) has exposed many people to infection as they wait to be processed; and it has been difficult to ensure that the health requirements for entry into South Africa are met. Many people are arriving without proof of COVID-19 tests,” Mr. Ramaphosa said.

“To reduce congestion and the high risk of transmission, cabinet has decided that the 20 land ports of entry that are currently open will be closed until 15th February for general entry and departure,” he added.

Mr. Ramaphosa, however, listed the exemptions, such as transporting fuel and cargo, emergency medical attention for a life-threatening condition, return to South Africa by its citizens or others with valid visas and departure of foreign nationals.

On the call by teacher unions not to reopen schools on January 27, Mr. Ramaphosa said various stakeholders were discussing the matter and would make a decision in the next few days.

The unions have said many teachers had succumbed to the virus already and the risk in this second wave to returning teachers and learners was too great as they could carry the new variant of the virus back to their families.

“We need to act with common purpose, understanding that what we each do is important for ourselves, for our families, our communities and our society,” the President said, underscoring the need to wear masks, and follow maintaining social distancing and others protocols.