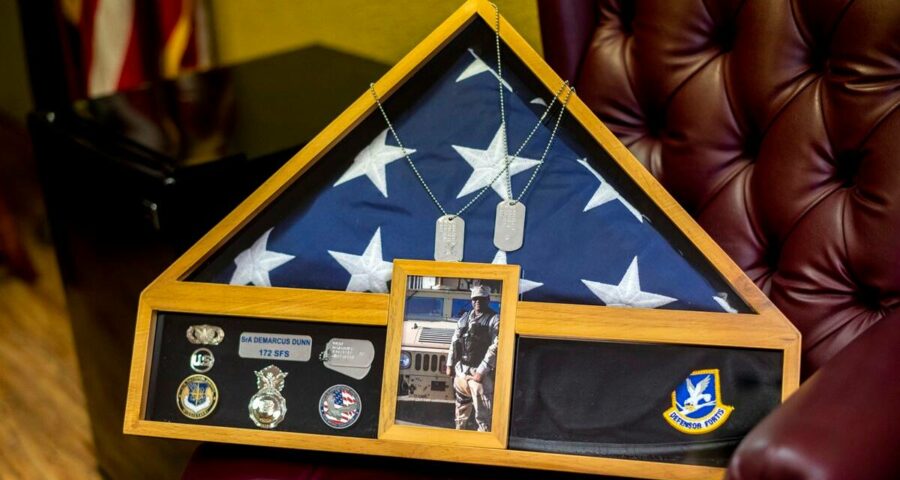 More than 460 American law enforcement officers have died from Covid-19 infections tied to their work since the start of the pandemic, according to the Officer Down Memorial Page, making the coronavirus by far the most common cause of duty-related deaths in 2020 and 2021. Over the past year and a half, a majority of the roughly 40 police officers who patrol Baker, Louisiana, a suburb of Baton Rouge, tested positive for the coronavirus. All of them recovered and went back to work — until Lt. DeMarcus Dunn got sick.

Dunn, a 36-year-old shift supervisor who coached youth sports and once chased down someone who fled the police station after being arrested, died from COVID-19 on Aug. 13. His wedding had been scheduled for the next day.

Chief Carl K. Dunn said he had assumed that the lieutenant, a distant relative, was vaccinated but thought it would be inappropriate to ask. It was not until after the death, the chief said, that he was told Dunn had not gotten a shot. For some others in the department who had been resisting vaccination, it was a turning point.

“They were like, ‘Oh, look, wait a minute,’” Dunn recalled last month. “Those are the ones that started getting it after DeMarcus left us.”

More than 460 American law enforcement officers have died from Covid-19 infections tied to their work since the start of the pandemic, according to the Officer Down Memorial Page, making the coronavirus by far the most common cause of duty-related deaths in 2020 and 2021. More than four times as many officers have died from Covid-19 as from gunfire in that period. There is no comprehensive accounting of how many American police officers have been sickened by the virus, but departments across the country have reported large outbreaks in the ranks.

While the virus has ravaged policing, persuading officers to take a vaccine has often been a struggle, even though the shots have proved to be largely effective in preventing severe disease and death.

Some elected officials say police officers have a higher responsibility to get vaccinated because they are regularly interacting with members of the public and could unknowingly spread the virus. The debate echoes concerns from earlier in the pandemic, when police officers in some cities resisted wearing masks in public.

Yet as more departments in recent weeks have considered requiring members to be vaccinated, officers and their unions have loudly pushed back, in some cases threatening resignations or flooding systems with requests for exemptions.

In San Jose, California, city leaders decided just as a vaccine mandate was taking effect to allow unvaccinated officers to remain employed through the end of the year, with incremental discipline and testing requirements. Mayor Sam Liccardo of San Jose said he wanted to keep as many police officers as possible on the job but worried about the public health risks of having unvaccinated officers on the streets.

But the officers have leverage. Many police departments have an abundance of job openings and a dearth of qualified applicants. And city leaders say they do not want to risk a mass departure of officers at a time when homicides have surged nationally.

“If you decide to move forward with mandating this vaccine, the loss of officers is on you,” said Josh Carter, an officer in Leesburg, Virginia, at a recent meeting where Town Council members considered a vaccine mandate for municipal workers (and decided not to vote on it that day). “I’m going to come back and ask what your plan is to keep my family and my neighbors safe with little to no officers patrolling our streets or our schools,” Carter told the council.

Still, proponents of the mandate have noted that there are risks to the public in not requiring the shots. Mayor Kelly Burk of Leesburg, in the Washington exurbs, said she favored requiring vaccines.

“We have a job, and that job is also to protect, and they’re a component of that protection,” Burk, a Democrat, said of the town’s police force. “And so if they’re not vaccinated, if they’re not willing to wear masks, then it becomes a real problem.”

Workplace vaccine mandates became more common as the delta variant sent cases soaring and as President Joe Biden announced plans to require vaccination or frequent testing at large employers. Mandates have succeeded in driving up vaccination rates at health care companies, airlines and other businesses, and relatively small numbers of workers have left their jobs over the issue.

Health departments generally do not publish vaccination data by occupation, but some cities have released figures showing that police department employees have been vaccinated at lower rates than most other government workers and at lower rates than the general public. In Los Angeles, where vaccines are required for city workers, more than 2,600 employees of the police department said they intended to seek a religious exemption, though almost all major religious denominations support vaccines.

Law enforcement and union officials cited disinformation, misleading claims by prominent conservatives and distrust in how vaccines were developed as reasons that some officers had resisted getting shots; many other Americans cite the same factors.

But some officials theorized that the daily dangers of police work may also make an invisible virus seem less of a hazard, and vaccination less high a priority, for the police.

Sheriff John Mina of Orange County, Florida, said that officers deal with “violent criminals all the time carrying guns, and I think they think that may be more of a threat.”

Mina, who is vaccinated, brought in a doctor to answer deputies’ questions about the vaccine and offered three days off to those who got shots. But the last time the department checked, about 45% of employees who responded to a survey were still not vaccinated.

Mina said he opposes mandates and worries that requiring shots could cause an exodus to agencies in neighboring communities.

No department has reported large-scale departures over mandates, but unions have hinted at that possibility. Some cities allow officers to get tested regularly rather than getting shots. Others, including Memphis, Tennessee, where homicides rose sharply during the pandemic and where officials are trying to hire more officers, have imposed no requirement.

It is nearly impossible to work from home or maintain social distance as a police officer, and at least 125 law enforcement officers have died from COVID-19 since the start of August, according to the Officer Down Memorial Page, a nonprofit group that tracks line-of-duty deaths (and has not yet counted Dunn’s).

Several of the most recent deaths have been reported in young officers: Freddie Castro, 23, of the Overland Park, Kansas, police; Joseph Kurer, 26, of the Fond du Lac, Wisconsin, police; Jennifer Sepot, 27, of the Fort Lauderdale, Florida, police.

The vaccination status of most of the deceased officers has not been made public. While some breakthrough infections of vaccinated people result in death, the vast majority of Americans hospitalized with or dying from COVID-19 are unvaccinated.

Chuck Wexler, executive director of the Police Executive Research Forum, which advises departments on best practices, said unions and police department leaders have frequently failed to reach agreement on mandates for officers. About 68% of American adults are fully vaccinated, though rates vary widely from state to state.

“If this was cops getting shot on the streets of America today at this number, there would be outrage,” Wexler said of COVID-19’s toll among officers. “This is an issue that begs for leadership and putting politics aside. And that’s exactly the opposite of what’s happening right now.”

A mandate test case is already playing out in Massachusetts, where Gov. Charlie Baker, a Republican, ordered state troopers and many other state employees to get vaccinated. Although most state troopers are in compliance, according to their union, some have refused to get a shot, with a mid-October deadline approaching.

Michael Cherven, president of the State Police Association of Massachusetts, which represents rank-and-file officers, said he believed dozens of troopers may leave their jobs over the issue.

“We went through the middle of this pandemic working day in and day out,” said Cherven. “We were able to take care of our own through mask wearing, self-isolation and testing. That worked.” He said he and the union’s executive board are vaccinated, but he believed it was wrong to force shots on troopers who are opposed to getting them.

In Louisiana, where DeMarcus Dunn’s old cruiser was still parked outside the Baker police station, Carl Dunn said he did not support requiring vaccines.

For more than a year, the chief has made daily phone calls to sick officers and delivered meals to officers in quarantine. When outbreaks have spread through his department, he has reshuffled schedules and asked officers to work overtime.

Dunn said he was talking to officers more now about the benefits of vaccination, and using the loss of their colleague as a cautionary tale, but he still believed vaccination was an individual choice.

It was a personal pitch from one of his own friends, Dunn said, that prompted him to get vaccinated early this year, despite some initial qualms.

“If I was reluctant at first, how can I tell anyone not be reluctant?” Dunn said. “I just say, ‘Man, if I were you, I would get that vaccine.’”