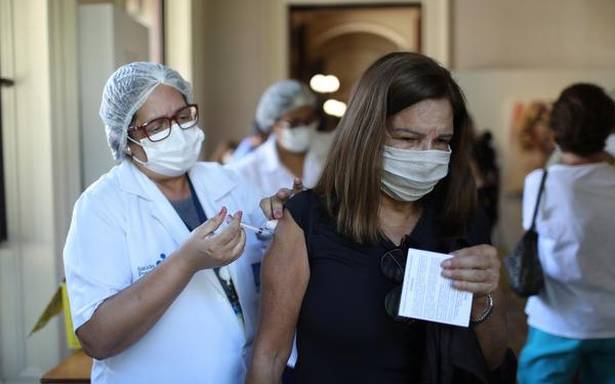 ‘These vaccine doses will not be needed in the United States, where it’s estimated that vaccine manufacturers will be able produce enough doses by early June to vaccinate every American’

The U.S. Chamber of Commerce, a powerful trade body, added its name to the growing list of voices asking the U.S. to help other countries – such as India – address their vaccine shortages.

“As the Covid pandemic inflicts a heavy toll on countries around the globe, the U.S. Chamber strongly encourages the administration to release the millions of AstraZeneca vaccine doses in storage – as well as other life-saving support – for shipment to India, Brazil, and other nations hard-hit by the pandemic,” Myron Brilliant, the Chamber’s Executive VP said in a statement released on Friday.

“These vaccine doses will not be needed in the United States, where it’s estimated that vaccine manufacturers will be able produce enough doses by early June to vaccinate every American. This move would affirm U.S. leadership, including in initiatives such as COVAX, and as we work with partners around the globe because no one is safe from the pandemic until we are all safe from it,” Mr Brilliant said.

Lawmakers, health specialists and experts from several Washington think-tanks have called on the Biden administration to send spare vaccines and oxygen to India – which is being ravaged by a second COVID-19 wave. A group of ten senators had written to U.S. President Joe Biden asking him to support an India-South Africa initiative for a temporary waiver of intellectual property rights at the WTO that would facilitate the production of COVID-19 therapeutics and vaccines around the world.

Twitter timelines were rife with speculation on why the U.S. had not yet acted.

“I find it hard to believe the United States does not have some ventilators to spare. Get them on planes @StateDeptSpox, @USAndIndia. Get remdesivir on planes. Get oxygen on planes. If vaccines are off limits get creative. People are dying. People are watching. Live our values,” Chris Clary, a political science professor at the University of Albany, tweeted.

On Friday, White House Press Secretary Jen Psaki said that discussions were on-going at various levels between the Indian and U.S. sides.

On Wednesday, Mr Biden said the U.S. was looking at helping abroad and had already “helped a little bit”- a reference to an agreement to send 4 million doses of the AstraZeneca vaccine, which has not yet been approved in the U.S., to Canada and Mexico.

“We’re looking at what is going to be done with some of the vaccines that we are not using. We’re going to make sure they are safe to be sent. And we hope to be able to be of some help and value to countries around the world,” he said.