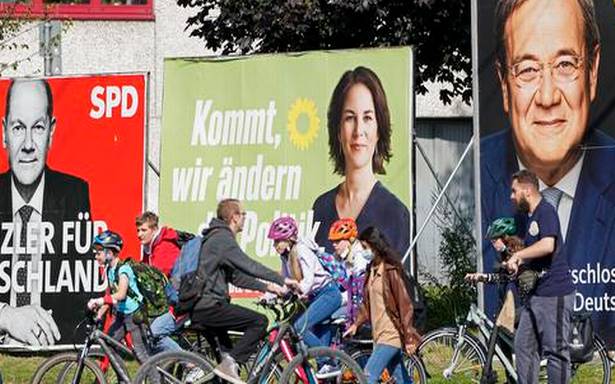 Germany’s political parties prepared to rally their supporters and win over undecided voters on Friday, two days before a national election that will determine who succeeds Chancellor Angela Merkel after 16 years in power.

Ms. Merkel’s centre-right Union bloc, with Armin Laschet as its candidate for chancellorship, has made small gains in the polls in recent weeks. But it remains narrowly behind the centre-left Social Democrats, headed by Finance Minister Olaf Scholz.

The Greens, who are putting forward their own candidate for chancellor for the first time, are trailing in third place, but could play kingmakers when it comes to forming a government.

Experts say one of the reasons why this year’s German election is closer and less predictable than usual is that the candidates are relative unknowns to most voters.

“It’s certainly not the most boring election,” said Hendrik Traeger, a political scientist at the University of Leipzig. “There were those in which Angela Merkel stood as the incumbent and it was simply a question of who she would govern with."

This time, Ms. Merkel’s party has struggled to energise its traditional base, which has so far failed to warm to Mr. Laschet, the Governor of North Rhine-Westphalia state.

“The key question is whether these voters will overcome the Laschet hurdle and vote for the Union despite Mr. Laschet” said Peter Matuschek of the polling company Forsa. “Or will they abstain from the vote or even choose another party.”

The Union bloc will hold its last big rally in Munich, while the Social Democrats are holding an event in the western city of Cologne. The Greens will stage their rally in nearby Duesseldorf.

Climate change has been cited as the most important issue by many in this election. Youth groups plan to stage a large protest outside the chancellery on Friday to demand tougher action on climate change.

The economy and the fallout from the coronavirus pandemic have also played an important role during the campaign.

About 60.4 million Germans are eligible to vote for a new parliament on Sept. 26. The strongest party will seek to form a governing coalition.