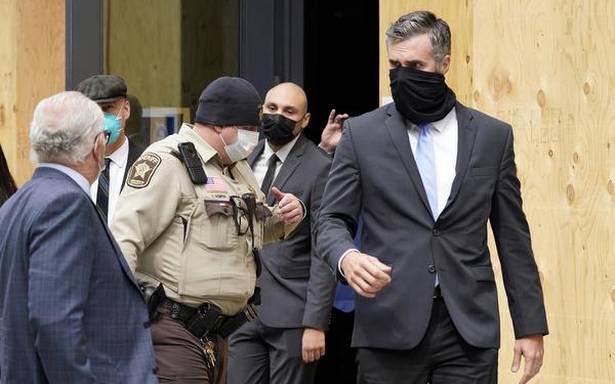 J. Alexander Kueng, Thomas Lane and Tou Thao are accused of depriving Floyd of his rights when they failed to give him medical aid as officer Derek Chauvin knelt on his neck.

The federal trial of three former Minneapolis police officers charged with violating George Floyd’s rights is expected to resume on February 7, after it was abruptly suspended last week because one of the defendants tested positive for COVID-19.

J. Alexander Kueng, Thomas Lane and Tou Thao are accused of depriving Floyd of his rights when they failed to give him medical aid as officer Derek Chauvin knelt on the Black man’s neck for 9 1/2 minutes while Floyd was handcuffed, facedown and gasping for air. Kueng and Thao are also accused of failing to intervene in the May 2020 killing that triggered protests worldwide and a reexamination of racism and policing.

The trial, which was in the middle of its second week, was halted on Wednesday when Judge Paul Magnuson said one of the defendants had tested positive. The defendant wasn’t named, but Kueng and Thao were in court that day and Lane was not. Lane’s attorney declined to say whether his client had COVID-19.

That “trial participant” was to be tested again before the trial resumes, as will all other case participants who had been near that person. The court said Mr. Magnuson and the jurors aren’t considered close contacts because they weren’t within six feet of the attorneys’ tables.

Case participants have to answer questions about COVID-19 symptoms each morning before the trial begins. If any test positive, have been in close contact with someone who did, or begins having symptoms, a COVID-19 test is immediately given.

Testimony began January 24 after a jury was quickly selected in one day. Mr. Magnuson ordered the selection of six alternates instead of the usual two in case any jurors became ill and had to drop out.

To ensure social-distancing, Mr. Magnuson set limits on who can be in the courtroom. That includes allowing only four pool reporters plus a sketch artist, along with a limited number of family and friends of the officers and Floyd. Everyone entering the courtroom was asked about symptoms.

The general public and other journalists can watch a closed-circuit TV feed in separate rooms.

Masks are mandatory for most people in the courthouse, as they are in public buildings across St. Paul and neighbouring Minneapolis. The judge made an exception for himself, citing a chronic lung condition and for witnesses when testifying so their voices aren’t muffled.

Most other federal court proceedings in Minnesota are being conducted by video or tele-conference due to the pandemic, while state courts are using a mix of in-person and remote proceedings.

Testimony so far has come from the government’s witnesses, with defence attorneys expected to call witnesses later. Lane’s attorney has said his client will testify, but it’s not known if the other officers will.

Floyd, 46, struggled with the officers when they tried to force him into a police vehicle and after they put him on the ground. Kueng knelt on Floyd’s back, Lane held his legs and Thao kept bystanders back.

Kueng, who is Black, Lane, who is white, and Thao, who is Hmong American, are charged with willfully depriving Floyd of his constitutional rights while acting under government authority. One count against all three officers alleges that they saw that Floyd needed medical care and failed to help. A count against Thao and Kueng contends that they didn’t intervene to stop Derek Chauvin. Both counts allege that the officers’ actions resulted in Floyd’s death.

Also read | Explained: What next after U.S. ex-cop’s conviction in George Floyd case

Chauvin was convicted of murder and manslaughter in state court last year and pleaded guilty to a federal civil rights charge. He remains in prison. Lane, Kueng and Thao also face a separate state trial in June on charges alleging that they aided and abetted murder and manslaughter. All three have been free on bail since shortly after they were charged in June 2020.