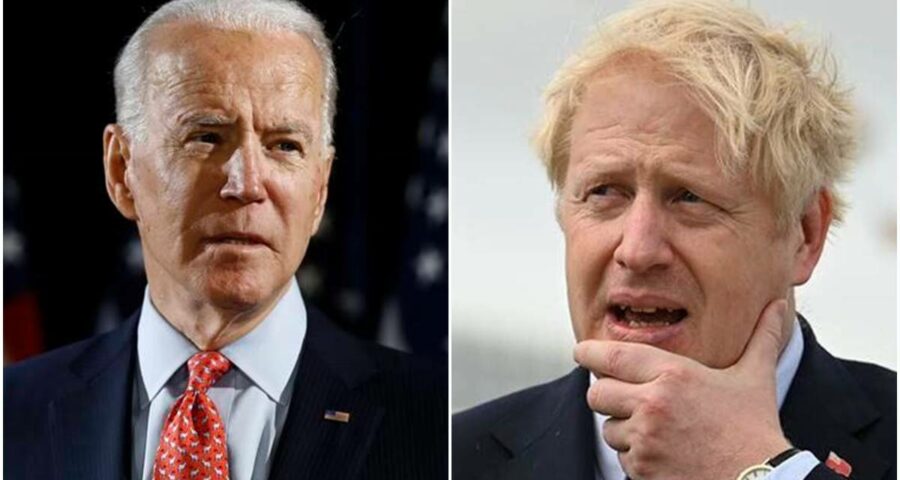 But the two men also continued to grapple with old-world challenges, including Biden’s private admonishment of the prime minister against taking actions that could inflame sectarian violence in Northern Ireland. 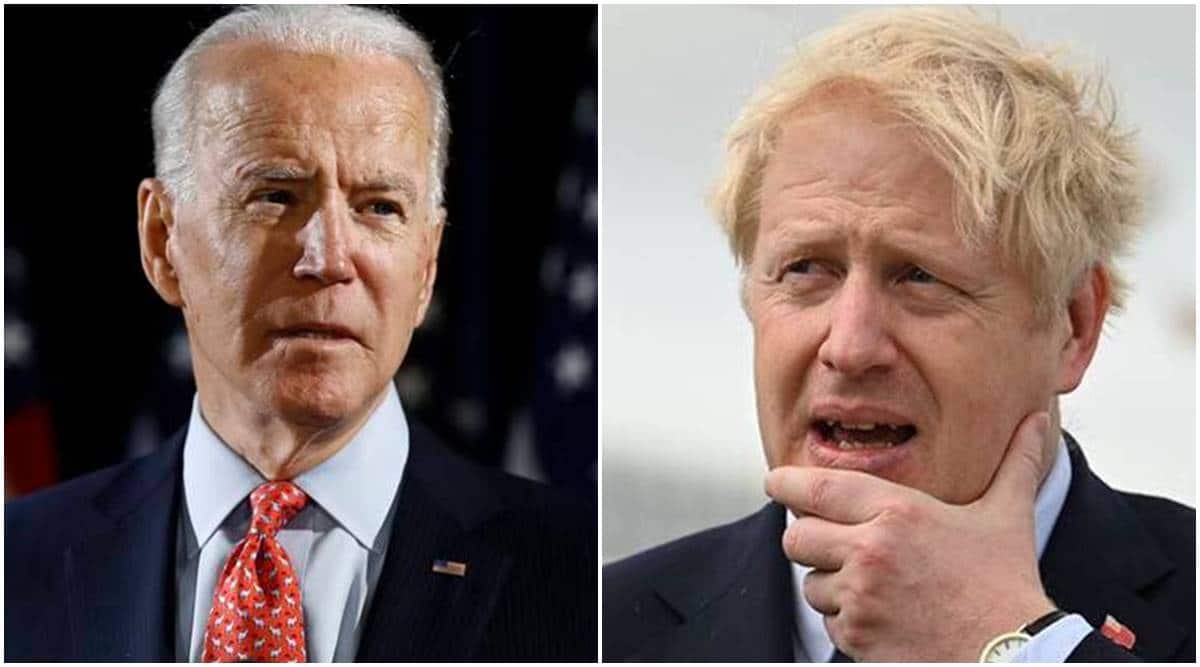 President Joe Biden and Prime Minister Boris Johnson of Britain signed a new version of the 80-year old “Atlantic Charter” Thursday, using their first meeting to redefine the Western alliance and accentuate what they said was a growing divide between battered democracies and their autocratic rivals, led by Russia and China.

The two leaders unveiled the new charter as they sought to focus the world’s attention on emerging threats from cyberattacks, the COVID-19 pandemic that has upended the global economy, and climate change, using language about reinforcing NATO and international institutions that Biden hoped would make clear that the Trump era of America First was over.

But the two men also continued to grapple with old-world challenges, including Biden’s private admonishment of the prime minister against taking actions that could inflame sectarian violence in Northern Ireland.

The new charter, a 604-word declaration, was an effort to stake out a grand vision for global relationships in the 21st century, just as the original, first drafted by Winston Churchill and Franklin D. Roosevelt, was a declaration of a Western commitment to democracy and territorial integrity just months before the United States entered World War II.

“It was a statement of first principles, a promise that the United Kingdom and the United States would meet the challenges of their age and that we’d meet it together,” Biden declared after his private meeting with Johnson. “Today, we build on that commitment, with a revitalized Atlantic Charter, updated to reaffirm that promise while speaking directly to the key challenges of this century.”

Meeting in a seaside resort on the Cornwall coast of England, with Royal Navy ships patrolling to protect the in-person meeting of the Group of 7 industrial nation leaders, the two men clearly sought to cast themselves in the Churchill and FDR mold. As they looked over a small exhibit of the original Atlantic Charter, agreed on aboard a ship off Newfoundland in August 1941, less than four months before the Pearl Harbor attack, Johnson noted that “this was the beginning of the alliance and of NATO.”

But Biden’s aides said they thought the charter had grown musty and did not reflect a world of different challenges — from cyberspace to China — in which Britain is a much-diminished power.

Where the original charter contemplated the “final destruction of the Nazi tyranny” and called for freedom to “traverse the high seas and oceans without hindrance,” the new version focused on the “climate crisis” and the need to “protect biodiversity.” It is sprinkled with references to “emerging technologies,” “cyberspace” and “sustainable global development.”

In a direct rebuke of Russia and China, the new agreement calls on Western allies to “oppose interference through disinformation or other malign influences, including in elections.” It ranks the threats to democratic nations in a technological era: “We affirm our shared responsibility for maintaining our collective security and international stability and resilience against the full spectrum of modern threats, including cyber threats.”

And it vows that “as long as there are nuclear weapons, NATO will remain a nuclear alliance. Our NATO Allies and partners will always be able to count on us, even as they continue to strengthen their own national forces.”

It would be difficult to imagine Johnson, who nurtured his relationship with former President Donald Trump, signing such a document in the Trump era. Yet he is clearly tacking toward Biden, who was born barely two years after the first charter was signed and who, throughout his political life, came to embrace the alliance it created.

The new charter explicitly calls for both countries to adhere to “the rules-based international order,” a phrase that Trump and his aides sought, unsuccessfully, to banish from previous statements by Western leaders, convinced that it represented a globalist threat to Trump’s America First agenda at home.

Biden also used his first full day abroad to formally announce that the United States will donate 500 million doses of the Pfizer-BioNTech COVID vaccine to 100 poorer nations, a program that officials said would cost $3.5 billion, including $2 billion in donations to the COVAX consortium that had already been announced.

“At this moment, our values call us to do everything that we can to vaccinate the world against COVID-19,” Biden said. He waved aside concerns that his administration would use distribution of the vaccine as a diplomatic weapon in the global marketplace.

“The United States is providing these half-billion doses with no strings attached,” he said. “Our vaccine donations don’t include pressure for favors or potential concessions. We’re doing this to save lives. To end this pandemic. That’s it. Period.”

But the donation, while portrayed as a humanitarian move that was also in America’s own interest, also carries a political message. Biden’s aides say it is a powerful demonstration that democracies — and not China or Russia — are capable of responding to the world’s crises and can do so faster and more effectively.

By taking a leading part in the effort to vaccinate the world and providing resources to confront the gravest public health challenges, officials said the United States was reclaiming a role it has sought to play since the end of World War II.

Johnson, who is eager to use the summit as a showcase for a post-Brexit identity branded “Global Britain,” has also outlined ambitious plans to help end the pandemic. In the run-up to the summit, Johnson called on leaders to commit to vaccinating every person in the world against the coronavirus by the end of 2022.

Public health experts applauded Biden’s announcement. If earlier donations had been little more than Band-Aids on an enormous global vaccine deficit, the 500 million doses were more in keeping with the scale of the challenge, they said.

The announcement came as COVAX, the vaccine-sharing partnership, has struggled to supply enough doses, especially since India blocked shipments from a major factory there to accelerate its domestic vaccination drive. COVAX has shipped 82 million doses, less than one-fifth of the supply it had once expected to have available by June.

But getting doses into people’s arms continues to pose difficulties. Global public health officials have been urging wealthy nations to start distributing their donations soon, rather than releasing extra doses all at once later this year, so that countries could administer doses as they arrived.

In his meeting with Johnson, Biden also dealt with an old issue he knows well: the British territory of Northern Ireland. It first flared as a source of tension between Biden and Johnson during the 2020 presidential campaign, when Biden warned on Twitter that “we can’t allow the Good Friday Agreement that brought peace to Northern Ireland to become a casualty of Brexit.” He added that any trade deal between the United States and Britain would hinge on preventing the return of a hard border between Northern Ireland and Ireland, which is in the European Union.

A proud Irish American fond of quoting poetry from William Butler Yeats, Biden’s loyalties on this issue have never been in doubt. They stand in stark contrast to Trump, who championed Brexit and once goaded Johnson’s predecessor, Theresa May, to sue the EU. Biden, by contrast, has called Brexit a mistake.

The problem is that tensions over post-Brexit trading arrangements in Northern Ireland have only deepened since Biden was elected. Britain has blamed the EU for trade disruptions that left some supermarket shelves empty in Northern Ireland after Britain formally exited the bloc in January.

Negotiations over the arrangements, known as the Northern Ireland Protocol, have grown increasingly contentious, with Britain threatening to pull the plug on the deal unless Brussels makes concessions. Last week, the ranking American diplomat in London, Yael Lempert, bluntly voiced the administration’s concerns about the rising tensions to Britain’s chief Brexit negotiator, David Frost.

News of that meeting surfaced in the Times of London on Wednesday night just as Biden was arriving in the country. While some analysts predicted it would overshadow Biden’s meeting with Johnson, others pointed out that it served a purpose: publicly registering America’s concerns in a way that spared Biden the need to emphasize the point in person.

White House officials have been at pains to say they do not want to be pulled into a dispute between London and Brussels. At the same time, they leave no doubt about the depth of Biden’s feeling about the Good Friday Agreement, which was brokered with the help of one of his Democratic predecessors, Bill Clinton.

“He’s not issuing threats or ultimatums,” the national security adviser, Jake Sullivan, told reporters on Air Force One. “He’s going to simply convey his deep-seated belief that we need to stand behind and protect this protocol.”