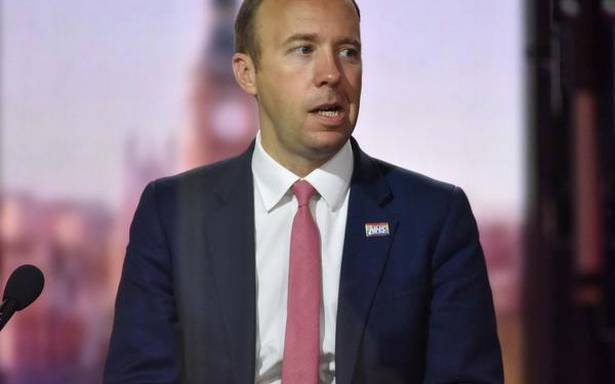 The Delta variant of COVID-19, or the B1.617.2 variant first identified in India, is around 40 per cent more transmissible than the Alpha or so-called Kent variant of concern (VOC), UK Health Secretary Matt Hancock said on Sunday.

The senior Cabinet minister said the spread of the Delta variant, behind a recent rise in coronavirus infections in the country, had made the unlocking plans set for June 21 more difficult.

However, he pointed out that a majority of those in hospital as a result of the Delta variant had not had a vaccine at all and only a "small minority” had had both doses of a COVID-19 vaccine, which the minister said reflects the scientific advice that one vaccine is not quite as effective against the Delta VOC as against the Alpha variant but both doses are just as effective.

“That figure, around 40 per cent more transmissible, is the latest advice that I have. That means that it is more difficult to manage this virus with the new Delta variant, but crucially we believe that with two doses of the vaccine you get the same protection as the old variant," Mr Hancock told ‘Sky News’.

The minister also confirmed that vaccines would be opened up to the next age cohort of under-30s in the next few days by the National Health Service (NHS).

"This week we will be opening up vaccines to the under-30s and so we are getting a step closer to the point when we’ve been able to offer the vaccine to all adults in this country," he said.

"Everybody must go and get their second jab though because the first isn’t as effective on its own. We all need to go and get vaccinated and that way we will break this link between the number of cases and the number of hospitalisations," he added.

Asked if there could be a delay to the June 21 timeline for an end to all lockdown restrictions in the country, Hancock said the government is “absolutely open” to a delay if it needs to happen and if all the requisite tests set as part of the roadmap are not fully met. One of the four critical tests set by the government for a reopening is that the assessment of the risk from the deadly virus is not fundamentally changed by new VOC.

The other three tests cover the vaccine deployment programme continuing successfully; evidence showing vaccines are sufficiently effective in reducing hospitalisations and deaths in those vaccinated; and infection rates do not risk a surge in hospitalisations, which would put unsustainable pressure on the NHS.

Three out of the four tests are currently being met, with the risk assessment from the Delta VOC the only unknown factor ahead of June 14 when the government is expected to confirm whether the unlocking roadmap will stay on track for June 21.

The government has indicated that the wearing of face coverings and working from home measures could continue in the long-term, beyond that date.

"Yes, I wouldn’t rule that out,” Mr Hancock told the BBC.

"The way we are looking at this is step four [of the roadmap] involves the removing of the remaining social restrictions like the rule of six and some of the business closures which are still there. And separately we have a piece of work on what the social distancing rules should be after that," he said.

Latest NHS data revealed on Sunday that more than half of the people in England are now fully vaccinated, with 23,077,511 people receiving both doses, and over three-quarters of the adult population in England have now been vaccinated, with 33,525,485 first doses delivered.

"If you are contacted to bring forward your second dose appointment, I would urge you to do this as soon as possible, as getting both doses is what will give everyone the maximum possible protection against COVID," said Dr Emily Lawson, NHS lead for the COVID-19 vaccination programme.

Last month, the government recommended that people aged 50 and over and the clinically vulnerable have their second doses brought forward to counter the spread of the Delta variant.

The UK recorded a further 6,238 coronavirus cases on Friday as England’s R number, or the rate of infection, began to rise again, largely attributed to the Delta variant.