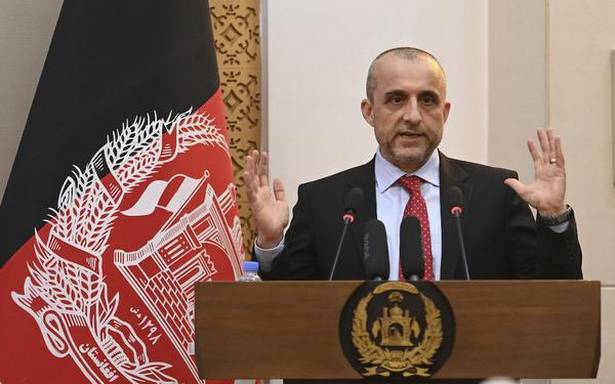 “I won’t disappoint millions who listened to me. I will never be under one ceiling with Taliban. NEVER,” Amrullah Saleh wrote in English on Twitter, before going underground

Afghanistan’s defiant Vice-President made one thing clear as the Taliban seized control of the capital following the collapse of his government — he will not surrender.

It appears Amrullah Saleh has retreated to the country’s last remaining holdout: the Panjshir Valley northeast of Kabul.

"I won’t disappoint millions who listened to me. I will never be under one ceiling with Taliban. NEVER," he wrote in English on Twitter on August 15, before going underground.

A day later, pictures began to surface on social media of the former Vice-President with the son of his former mentor and famed anti-Taliban fighter Ahmed Shah Massoud in Panjshir — a mountainous redoubt tucked into the Hindu Kush.

Mr. Saleh and Massoud’s son, who commands a militia force, appear to be putting together the first pieces of a guerilla movement to take on the victorious Taliban, as fighters regroup in Panjshir.

Famed for its natural defences, the valley never fell to the Taliban during the civil war of the 1990s, nor was it ever conquered by the Soviets a decade earlier.

"We will not allow the Taliban to enter Panjshir and will resist with all our might and power, and fight them," one resident told AFP on condition of anonymity.

Such a battle would be the latest in Mr. Saleh’s long struggle against the Taliban as a onetime insurgent turned spy chief and later Vice-Premier.

Orphaned at a young age, Mr. Saleh first fought alongside guerilla commander Massoud in the 1990s.

He went on to serve in his government before being chased out of Kabul when the Taliban captured it in 1996.

The hardliners then tortured his sister in their bid to hunt him down, Mr. Saleh has said.

"My view of the Taliban changed forever because of what happened in 1996," Mr. Saleh wrote in a Time magazine editorial last year.

‘We will continue our fight’

After the September 11, 2001 attacks, Mr. Saleh — then a part of the anti-Taliban resistance — became a key asset for the CIA.

The relationship paved the way for him to lead the newly formed Afghanistan intelligence agency, the National Security Directorate (NDS), in 2004.

As NDS chief Mr. Saleh is believed to have amassed a vast network of informants and spies inside the insurgency and across the border in Pakistan, where Pashto-speaking agents kept track on Taliban leaders.

The intelligence Mr. Saleh gathered provided what he alleged was proof the Pakistani military continued to back the Taliban.

Mr. Saleh’s rise, however, has not been without its share of dramatic stumbles.

In 2010, he was sacked as Afghanistan’s spy chief following a humiliating attack on a Kabul peace conference.

Exiled into the political wilderness, Mr. Saleh maintained his fight against the Taliban and Islamabad on Twitter, where he fired off daily tweets taking aim at his longtime foes.

A return to favour came in 2018 when he briefly oversaw the interior ministry after sealing an alliance with president Ashraf Ghani, who has now fled to an unknown location.

His most recent political revival came as the United States was preparing to exit Afghanistan and coincided with a series of assassination attempts on Mr. Saleh by the Taliban.

His latest close call came last September when a massive bomb targeting his convoy killed at least 10 people in Kabul.

Within hours of the attack, Mr. Saleh appeared in a video with his left hand bandaged, promising to fight back.

"We will continue our fight," he said.