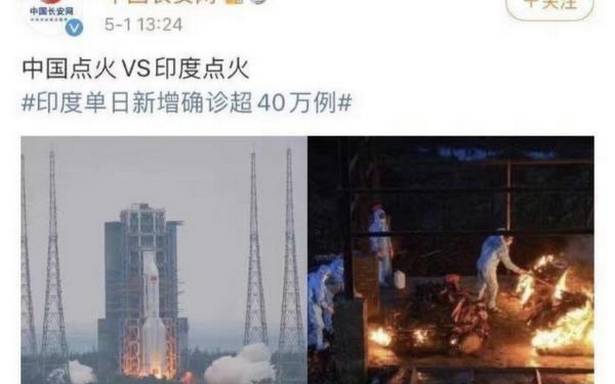 The account, which has 15 million followers, in a message on Saturday shared two images side-by-side of a rocket launch in China and a cremation ground in India, adding a message: “China lighting a fire, India lighting a fire”.

A social media account linked to the Communist Party of China’s (CPC) top law enforcement body came under fire in China over the weekend for mocking India’s COVID-19 deaths in a social media post.

The post was shared on Weibo, China’s Twitter-equivalent, by an account maintained by the CPC’s Central Political and Legal Affairs Commission, the powerful law enforcement body that controls the courts and police.

The account, which has 15 million followers, in a message on Saturday shared two images side-by-side of a rocket launch in China and a cremation ground in India, adding a message: “China lighting a fire, India lighting a fire”.

While the message initially went viral, it prompted widespread outrage on Chinese social media for its insensitivity, leading the Party-linked account to take the unusual step of deleting the post.

Dong Mengyu, a researcher, said on Twitter that one blogger wrote an article in response saying, “I apologise to Indian people on my own behalf. The post by the [Central Political and Legal Affairs Commission’s] Weibo account doesn’t represent me. We live on the same planet… We feel your sufferings.” That essay, Mr. Dong said, was later deleted.

The original post, reported Manya Koetse of What’s on Weibo, a website that tracks social media trends in China, was shared 9,000 times before it was deleted. It was not the only such post from an official organ mocking India’s situation – another Weibo account linked to the Ministry of Public Security, the top police authority, shared a similar message.

Both posts prompted widespread derision, at a time when several Chinese social organisations have begun fundraising efforts to channel assistance towards India, including some prominent Buddhist organisations.

One widely followed social media account maintained by lawyer Wang Peng, Ms. Koetse reported, posted a response describing the message as “such an inappropriate comparison”. "Every country encounters disasters! Not to mention that in times of the pandemic, every country is involved,” he was quoted as saying. “From the propaganda point of view this is a classic case of propaganda failure,” added another. "This is so inappropriate for an official account, it does not represent the people of China.”