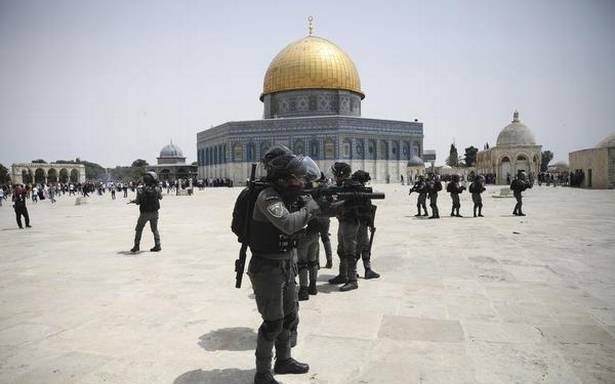 Scattered clashes have broken out between Palestinian protesters and Israeli police at the Al-Aqsa Mosque compound in Jerusalem hours after a truce in Gaza went into effect.

Clashes at the holy site, which is revered by Jews and Muslims, were one of the main triggers for the Gaza fighting.

Immediately after Friday prayers, hundreds of Palestinians had held a celebratory demonstration at Al-Aqsa in which they waved Palestinian flags and banners of the militant Hamas group ruling Gaza. It was unclear what set off the clashes.

Palestinians rallied by the thousands early Friday after a cease-fire took effect, with many viewing it as costly but clear victory for Hamas. Israel vowed to respond with a “new level of force” to any further hostilities.

Israeli Prime Minister Benjamin Netanyahu, who has faced criticism from his hawkish base for ending the offensive prematurely, said Israel had done “daring and new things, and this without being dragged into unnecessary adventures.” He added that Israeli forces had caused “maximum damage to Hamas with a minimum of casualties in Israel.”

Like the three previous wars between the bitter enemies, the latest round of fighting ended inconclusively. Israel claimed to have inflicted heavy damage on Hamas with hundreds of bruising airstrikes but once again was unable to halt the rockets.

Hamas also claimed victory, despite the horrifying toll the war took on countless Palestinian families who lost loved ones, homes and businesses. It now faces the daunting challenge of rebuilding in a territory already suffering from high unemployment and a coronavirus outbreak.

The cease-fire was brokered by neighboring Egypt after the U.S. pressed Israel to wind down the offensive. Mr. Netanyahu announced that Israel had accepted the proposal late Thursday, while emphasizing that “the reality on the ground will determine the future of the campaign.”

U.S. Secretary of State Antony Blinken plans to visit the region in the coming days “to discuss recovery efforts and working together to build better futures for Israelis and Palestinians.” the State Department said.

The United States, Israel’s closest and most important ally, initially backed what it said was Israel’s right to self-defence against indiscriminate rocket fire. But as the fighting dragged on and the death toll mounted, the Americans increasingly pressured Israel to stop the offensive.

Mr. Netanyahu faced heavy criticism from members of his hawkish, nationalist base. Gideon Saar, a former ally who now leads a small party opposed to the Prime Minister, called the cease-fire “embarrassing.” Itamar Ben Gvir, head of the far-right Jewish Power party, tweeted that the cease-fire was “a grave surrender to terrorism and the dictates of Hamas.”

In a potentially damaging development for the Israeli leader, the Palestinian militants claimed Mr. Netanyahu had agreed to halt further Israeli actions at the Al-Aqsa Mosque and to call off the planned evictions of Palestinians in the nearby Sheikh Jarrah neighbourhood.

An Egyptian official said only that tensions in Jerusalem “will be addressed”.