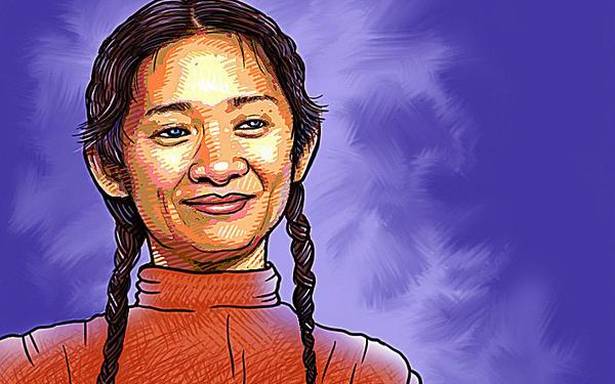 Ms. Zhao recorded another first. In her acceptance speech, she quoted a well known classical Chinese poem, recalling her childhood in China. “When I was growing up in China, my dad and I would play this game where we would memorise classical Chinese poems and texts, and recite it together and try and finish each other’s sentences,” she said. “One I remember so dearly, ‘Ren Zhi Chu, Xing Ben Shan’, means, ‘people at birth are inherently good’. Those six characters had such a great impact on me and I still truly believe them today.”

Both firsts would have ordinarily been headline-making in China and lapped up by a country that, not unlike India, is hungry to claim successes of her own, even from those who long left her shores. Yet Ms. Zhao’s Oscars success has been relatively muted. News of her prize has been played down, in some quarters even censored, underlining her troubled relationship with her country of birth.

On Douban, a popular social media platform, videos of the award and speech were removed, the Washington Post reported, while the Twitter-equivalent Weibo was also censoring posts about her. “One blogger wrote in frustration,” the Post reported, “that the only Oscar-related content they could find was that of a singer named Oscar Wang who had been unexpectedly eliminated from a boy band contest.”

Ms. Zhao’s film, meanwhile, ran into trouble with the regulators. Originally scheduled for an April release, Nomadland is yet to hit the theatres. And not only that, for the first time since 2003, China’s official television station CCTV did not even broadcast the Oscars. Ms. Zhao’s involvement was seen as one reason, the other being the nomination of a documentary on the Hong Kong protests.

Born in Beijing, Ms. Zhao grew up in the Chinese capital until 14, and then moved to England and then the U.S. for school. After attending film school at NYU, her major breakthrough was her 2015 drama Songs My Brothers Taught Me about a Native American brother and sister and life on a reservation.

The critical success of Nomadland last year, which was quickly seen as an Academy Awards-favourite, initially went down well with the Chinese media and Ms. Zhao was warmly acclaimed. That quickly soured when comments she made in a 2013 interview surfaced and spread like wildfire. Ms. Zhao had spoken about growing up in “a place where there are lies everywhere”. Widespread outrage quickly followed, and a director who was hailed by China’s film community — and remains celebrated among her fellow directors there — quickly faded from attention of the state media, underlining the decreasing tolerance in China for the slightest criticism.

That anger has somewhat dissipated following her win.

On one level, there is some irony in the controversy, as Chinese regulators have much to enjoy about Nomadland, which follows the story of Fern (played by Frances McDormand), and her journey across America in her trusted van as she finds both work and a sense of belonging in the wake of losing her job and her husband. Based on the 2017 non-fiction book by journalist Jessica Bruder, the film offers a searing look at America and those that have been left behind, themes that, one might have assumed, would be welcomed by Chinese authorities who are usually all-too-eager to shine the light on the flaws of the U.S.

On another level, Ms. Zhao’s success is also a reminder of why she perhaps chose to make her home elsewhere in the first place. Nomadland is also a story of freedom, and of pursuing it at any cost. “The last free place in America,” we are told, “is a parking spot”. In the film, Fern resents being asked if she is “homeless”. “I’m houseless,” she retorts, “which is not the same thing”. A Chinese filmmaker offering an unsparing and critical look at Chinese society in today’s China, let alone a foreign-born one, would probably not have gotten very far.