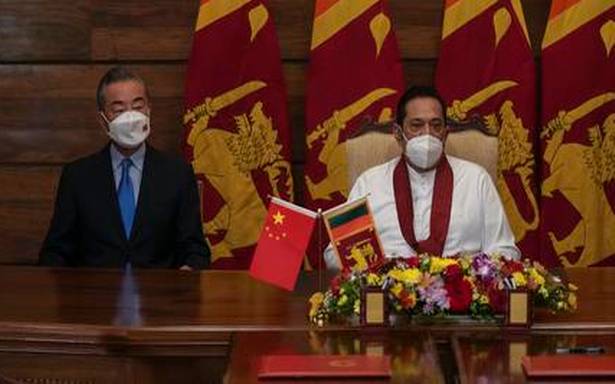 Prime Minister Mahinda Rajapaksa took to Twitter to announce that he had a “very pleasant meeting” with Mr. Wang.

Chinese Foreign Minister Wang Yi on Sunday held talks with Sri Lankan Prime Minister Mahinda Rajapaksa and discussed a host of issues, including promoting tourism, investments, and fight against the COVID-19 pandemic as the two countries marked the 65th anniversary of diplomatic ties.

Mr. Wang, who is also the State Councillor, arrived in Colombo on Saturday from the Maldives on a two-day visit during which he is scheduled to meet the country’s top leadership.

Prime Minister Mahinda Rajapaksa took to Twitter to announce that he had a “very pleasant meeting” with Mr. Wang.

“Had a very pleasant meeting with the Foreign Min of #China. Discussions centered around the logistics of facilitating the return of the many #lka med students to China. Also discussed were a host of issues inc Tourism, investments, #COVID19SL relief & post Covid preparedness,” he said on Twitter.

“I thanked #China and her people for the continued support to #lka. As both our nations celebrate 65 years of bilateral relations, I am hopeful that this relationship we share will only grow & be strengthened in the years to come,” he said in another tweet.

Signed in 1952, the Rubber-Rice Pact was a trade agreement between Lanka and China under which Colombo supplied rubber to Beijing in exchange for rice, leading to the establishment of diplomatic relations and expansion of trade between the two nations.

The events marking the occasions will be held at the Chinese-built port city in central Colombo, one of the many mega infrastructure development projects supported by China since 2010.

Foreign Secretary Colombage said that new Chinese investment opportunities might be sealed by Sri Lanka during the foreign minister’s visit.

The relationship between the two countries has been under stress in the recent months.

China protested against Sri Lanka’s rejection of an organic fertiliser shipment which the local farmers and some experts claimed was contaminated.

The Sri Lankan commercial high court here blocked payment for it despite top level interventions by China. The Chinese black listed the Sri Lankan state bank for not honouring the payment.

Sri Lankan scientists had questioned the quality of the Chinese fertiliser consignment, saying that instead of helping, it could prove harmful to the crops.

However, on Friday, on the eve of Mr. Wang’s visit, the Sri Lanka’s People’s Bank released $6.9 million U.S. to the Chinese company.

China’s blacklisting of the Sri Lankan bank and the public clash between officials on both sides had come amid growing concerns over an acute agriculture crisis in Sri Lanka, following President Gotabaya’s decision in May last year to abruptly switch from chemical to organic fertilisers.

The decision triggered protests from farmers who said the fertiliser ban would result in reduction in harvest, leading to a food crisis this year.

China in December suspended a project to install hybrid energy plants in three islands of Sri Lanka, citing “security concern” from a “third party”, amid reports of India raising concern over its location.

In early 2021, India lodged a “strong protest” with Lanka on the award of the tender to the Chinese company for the construction of renewable energy power plants in Delft, Nagadeepa and Analthivu.

Mr. Wang’s visit is taking place at a time when Sri Lanka is facing its all-time worst foreign exchange crisis.

By December, the reserves position had plummeted to just one month’s imports or a little over $1 billion.

However, by the end of the year, the Central Bank announced that the reserves position had improved and the cash realisation was believed to have come from a previously agreed currency swap with China.