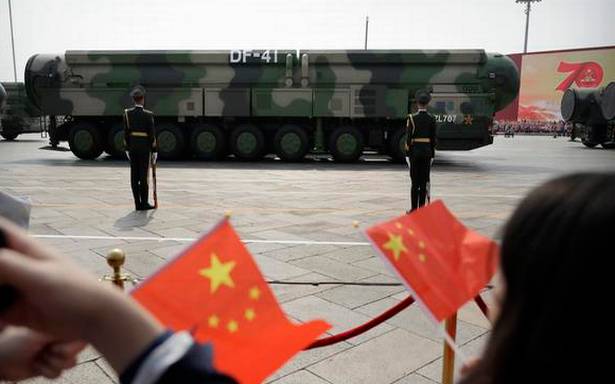 The Pentagon’s new estimate marks a dramatic increase from the projection reported in last year’s report, which placed Beijing’s tally around 400 nuclear warheads within a decade

China is sharply increasing its nuclear arsenal and could have up to 700 deliverable warheads by 2027 and at least 1,000 by 2030, as the Communist giant aims to surpass U.S. global power by the middle of the 21st century, the Pentagon has warned in a new report.

China is investing in, and expanding, the number of its land-, sea-, and air-based nuclear delivery platforms and constructing the infrastructure necessary to support this major expansion of its nuclear forces, it said on November 4 in a congressionally mandated report, amidst tense relations between Washington and Beijing over a range of issues, including Taiwan.

The Pentagon’s new estimate marks a dramatic increase from the projection reported in last year’s report, which placed Beijing’s tally around 400 nuclear warheads within a decade.

China is also supporting this expansion by increasing its capacity to produce and separate plutonium by constructing fast breeder reactors and reprocessing facilities, it said.

The report also raises concerns over Beijing’s increasingly aggressive behaviour towards Taiwan, India and continued assertive actions against countries like Indonesia, Malaysia, the Philippines and Vietnam.

"The accelerating pace of the PRC’s nuclear expansion may enable the PRC to have up to 700 deliverable nuclear warheads by 2027. The PRC likely intends to have at least 1,000 warheads by 2030, exceeding the pace and size the Department of Defense projected in 2020," the report said.

China’s modernisation and expansion of its nuclear force is part of a broader effort aimed at matching, and in some cases surpassing, the US military by 2049 as the dominant power in the Indo-Pacific region, according to the report.

China has possibly already established a nascent “nuclear triad” with the development of a nuclear capable air-launched ballistic missile (ALBM) and improvement of its ground and sea-based nuclear capabilities, it said.

New developments in 2020 further suggest that China intends to increase the peacetime readiness of its nuclear forces by moving to a launch-on-warning (LOW) posture with an expanded silo-based force, it said.

The Pentagon report also says that China has continued its aggressive, top-level push to master advanced technologies and become a global innovation superpower.

"The PRC seeks to dominate technologies associated with the Fourth Industrial Revolution; this push directly supports the People’s Liberation Army’s ambitious modernisation efforts and its goal of becoming a “world-class” military capable of “intelligentised” warfare.

China has long viewed the United States as a competitor and has characterised its view of strategic competition in terms of a rivalry among powerful nation states, as well as a clash of opposing systems, the Pentagon report’s preface noted.

China’s strategy aims to achieve “the great rejuvenation of the Chinese nation” by 2049 to match or surpass U.S. global influence and power, displace American alliances and security partnerships in the Indo-Pacific region, and revise the international order to be more advantageous to Beijing’s authoritarian system and national interests, according to the report.

Despite challenges posed by the COVID-19 pandemic, Beijing continued its efforts to advance its overall development including steadying its economic growth, strengthening its armed forces, and taking a more assertive role in global affairs, it said.

Meanwhile, reacting sharply to the Pentagon’s report, the Chinese Foreign Ministry said that just like similar reports in the past, it "disregards facts and is filled with bias".

"The U.S. is using this report to hype up the "China nuclear threat" theory. The international community has long seen through this trick of manipulating rhetoric in an attempt to confuse public opinion," Foreign Ministry Spokesman Wang Wenbin said in Beijing.

"As a matter of fact, the top source of nuclear threat in the world is no other but the U.S. itself," Mr. Wang said in response to a question at a regular ministry briefing.

The U.S. currently has 3,750 nuclear warheads in its stockpile, CNN reported, quoting the latest data from the State Department.

Mr. Wang, quoting statistics of "relevant international think tanks" claimed that by the beginning of 2021, the U.S., which has the world’s largest and most advanced nuclear arsenal, actually owned 5,550 nuclear warheads.

"I want to stress that China remains firmly committed to a nuclear strategy of self-defence, actively advocates the ultimate complete prohibition and thorough destruction of nuclear weapons, and keeps its nuclear force at the minimum level required for national security.