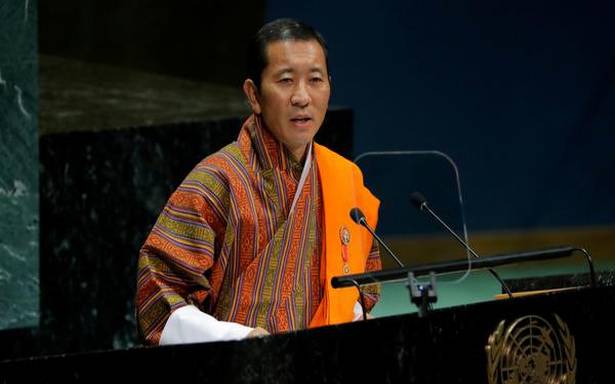 In a first, Himalayan nation has accepted donations from U.S., China.

Bhutan has received enough vaccines to complete inoculation of its adult population, said its Prime Minister Lotay Tshering on July 13, announcing that the country will have more than a million doses by the year-end, including, in a first, donations from the United States and China, two countries Bhutan does not have diplomatic relations with.

As The Hindu had reported, the Himalayan nation with a population of about 5,50,000 eligible for vaccination is receiving its second dose of Astra Zeneca vaccines from the European Union, after India failed to fulfil its promises due to the second wave of the pandemic.

“With more countries coming forward with similar commitments, Bhutan has informed them of the vaccine sufficiency for now…However, the request for the need for future booster doses has been conveyed,” Mr. Tshering said in a statement released by the Royal Government of Bhutan’s PMO.

The statement thanked Bhutan’s partners, including multilateral agencies such as the U.N. and specifically U.S., European Union, India and China, for “demonstrating unconditional support and playing an important part in the lives of all Bhutanese.”

Worried about the non-availability of vaccines for the second dose due in mid-July, Bhutan’s Health Minister had told The Hindu that the government had reached out to 17 countries worldwide to complete its full vaccination schedule.

According to the PMO, Bhutan has now received, or is receiving, 5,00,000 doses of Moderna vaccines from the U.S., 3,50,000 doses of Astra Zeneca from European countries including Denmark, Croatia, Bulgaria etc, 50,000 doses of Sinopharm from the Chinese government and 5,850 through the international COVAX alliance facility. In addition, Bhutan has placed commercial orders for 2,00,000 doses of Pfizer, which will arrive in a few months.

India had provided Bhutan with 5,50,000 doses of Covishield (Astra Zeneca) under its Vaccine Maitri programme for its first round of vaccinations in March 2021, of which about 62,000 are still being administered, as Bhutan has crossed a record 93% of first-dose vaccinations.

“For the second dose, His Majesty [King Jigme Khetarpal Namgyal Wangchuk] had advised the government that sourcing vaccines from India once more would be inconsiderate given the shortage of vaccines and surge of cases in the country at the time.”

New Delhi has suspended the Vaccine Maitri initiative since April, and the MEA has repeatedly said that domestic production of vaccines would be used for “domestic vaccinations” for the present, with about 4 million being administered daily.

In his statement, Mr. Tshering disclosed that India had conveyed that it would “step in despite all the challenges” if Bhutan failed to secure vaccines from elsewhere.

While Bhutan has close development partnerships with India and the EU, the government’s decision to accept 2,50,000 doses of Moderna from Washington and 50,000 doses of Sinopharm from China is seen as a departure from the past, given that Bhutan prefers not to maintain direct diplomatic relations with permanent members of the UNSC or P-5 countries.

In particular, Health Minister Dechen Wangmo, who was elected President of the WHO’s executive body in May this year, had made an appeal for Bhutan’s need with other countries during the annual meeting in Geneva.