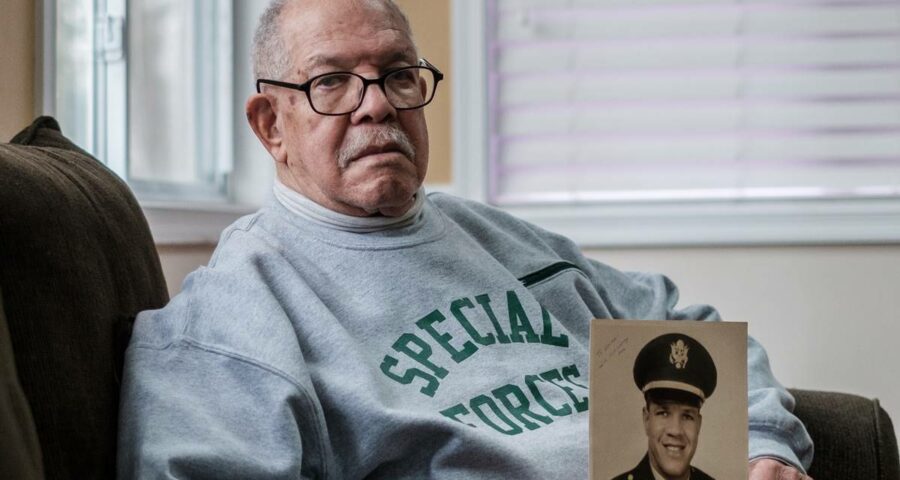 Capt. Paris Davis' teammates pushed several more times over the years for the medal, only to be met, they said, with silence and indifference. Capt. Paris Davis was in the thick of a predawn raid on an enemy camp in Vietnam when a grenade blasted out several of his teeth and, more troubling, tore off part of his trigger finger. Then enemy fire started pelting the Special Forces team he commanded. His most experienced sergeant was shot down. Then the demolitions specialist. Then the only medic.

It was June 18, 1965, and according to after-action reports, Davis, 26, was suddenly the last American standing with a ragtag company of 90 South Vietnamese volunteers, pinned down by hundreds of enemy troops. Certain that he was as good as dead, he began fighting without fear of consequence, pulling his M-16 trigger with his pinkie, sprinting repeatedly into open ground to rescue teammates, and refusing to leave the fight, even after being shot several times.

He made it out alive and was immediately nominated for the military’s highest award, the Medal of Honor. But the Army somehow lost the nomination. His frustrated commander resubmitted it, and inexplicably the nomination disappeared again.

His teammates pushed several more times over the years for the medal, only to be met, they said, with silence and indifference. They eventually came to believe the Army’s inaction had nothing to do with what the captain had done in 1965 and everything to do with who he was: one of the first Black officers in the Special Forces.

“What other assumption can you make?” said Ron Deis, 77, who was the youngest soldier on the team in 1965 and is one of a group of veterans who are still pressing for Davis to receive the award.

“We all knew he deserved it then,” Deis said during an interview from his home in Anchorage, Alaska, as he wiped away tears. “He sure as hell deserves it now.”

After 55 years of trying, the group got a sign of hope in January. Acting Secretary of Defense Christopher C. Miller personally ordered an expedited review of the lost nomination, to be completed by March. The resulting report will then go up the chain to the secretary of the Army, the secretary of Defense and finally President Joe Biden. If they all sign off, Davis, now 81, may finally be recognized.

The Army declined to comment on the award or answer questions about the reasons for earlier delays, saying in a statement that its policy is not to discuss any award until a final decision is made.

In a recent video interview from his home in Arlington, Virginia, Davis, who retired from the Army as a colonel in 1985 after a highly decorated career, shook his head and smiled at the mention of the long-delayed submission. He downplayed the significance of “all this stuff, medals and all that,” adding, “People need to keep on keepin’ on,” he said. “We’ve got to make this a better world. That’s how I feel.”

Over generations, there are examples of the military struggling with bias when it came to recognizing valor. In the segregated forces that served in World Wars I and II, no Black soldiers were awarded the Medal of Honor, despite clear examples of selfless heroism. It was only decades later that some presidents worked to correct past injustices, but veterans’ groups say there remains much more to be done.

When Davis took command of a Special Forces team in 1965, he was a tough but thoughtful college graduate with soft-spoken Midwestern humility, his fellow soldiers said. The son of a foundry worker in Ohio, he had studied political science on an ROTC scholarship at Southern University in Louisiana, played football and was named an All-American at halfback. In the Army, his quick mind and explosive strength earned him a spot in the elite and unruly Special Forces.

He arrived in Vietnam a month after the bloody civil rights march in Selma, Alabama, at a time when the Special Forces, like the country as a whole, were fraught with racial tension. As a rare Black officer in the Special Forces, he was warned by his commander, he would have to work twice as hard.

“You’re going to have an all-white team, and you have some guys from Alabama and one from Mississippi — it could be a rough thing,” Davis recalled his commander saying.

The young captain tried to be friendly but told his men straight away that if they called him anything besides “sir,” he wouldn’t waste time reporting them, he would just knock them to the ground.

The team was airdropped in a remote farming district of Binh Dinh province, a thoroughfare for enemy troops heading south, where they were to train a force of local volunteers. The United States would eventually send thousands of troops to try to hold that province, but in early 1965, Davis’ team numbered just 12.

He recalled that, as his commander had warned, not all of the men liked taking orders from a Black officer. But combat became a powerful unifier, and over time the team grew close.

Soldiers forget race when they are fighting together, Davis said in a 1969 television interview. “We’re a kin. Not ethnically, but by virtue of being Americans.”

As the June 18 raid began, he and three other Special Forces soldiers crept silently through the jungle before the sun was up, leading a file of South Vietnamese troops to strike an enemy camp. Davis and the team’s master sergeant, a Texan named Billy Waugh, stormed into the enemy commander’s hut and killed him at close range, according to witness statements and Army records. Then the team surged through the camp, throwing grenades and shooting everything that moved. Caught sleeping, scores of North Vietnamese troops died in their cots, while others fled into the jungle.

The captain was congratulating the team on a successful raid when enemy bugles sounded, announcing a counterattack by a much larger force.

The team was pushed back into a muddy rice paddy with no cover. A sniper bullet shattered the knee of Waugh, and two more splintered his foot. On the edge of the paddy, the team’s weapons specialist was knocked out by a mortar blast, and the medic was shot through the head.

Davis and his company of local volunteers took refuge on a small hill and spent the next 10 hours holding off waves of attackers, some getting close enough that he killed one with the butt of his M-16.

When American fighter jets bombed the enemy’s positions, instead of taking cover, Davis used the distraction to sprint out and rescue his wounded teammates, the after-action reports show. First he brought in the weapons specialist. Then he ran to get the master sergeant but was shot through the leg and had to retreat. During the next bomb strike, he limped back out across the rice field and grabbed the sergeant. A bullet clipped Davis’ arm this time, but he hoisted the sergeant over his shoulder and carried him back to safety.

Reinforcements arrived and found Davis wounded and covered in blood. The major in command ordered him to evacuate, but he refused, saying he still needed to rescue his medic.

Under the cover of friendly fire, he lurched again into the open, grabbed the wounded medic and started crawling back. “Am I going to die?” he recalled the medic mumbling to him. His reply: “Not before me.”

All four of the Special Forces soldiers made it out alive that day. Waugh went on to a storied 40-year career as a CIA agent. Now 91, Waugh declined to be interviewed for this article, saying his memory was failing. In a summary of the battle he wrote in 2016, Waugh wrote about his former commander, “I only have to close my eyes to vividly recall the gallantry.”

Knowing that Davis’ heroism easily cleared the bar for the Medal of Honor, his commander, Maj. Billy J. Cole, immediately submitted his name. “He has showed as much cold courage as any human I’ve ever heard of,” Cole proudly told the newspaper that covered their home base at Fort Benning, Georgia.

But nothing happened. The major pushed for an inquiry. In 1969, a hearing determined that no record of the original nomination could be found and directed the Army to resubmit it. The file disappeared again.

Over the decades since then, men from the team petitioned their senators to revive the matter, without success. Cole, who died in 2003, grew so frustrated that in later years he wondered aloud if the obstacle might be race, according to his daughter, Carol Cole, who helped him write a memoir. She said that failing to get the medal for Davis “was one of his greatest regrets.”

The cause was picked up in 2014 by a group of veterans and volunteers who specialize in winning recognition for overlooked Special Forces soldiers. They pieced together tattered newspaper clippings, yellowed Army files and firsthand accounts, and got their work into the hands of high-ranking Pentagon officials who moved the award forward.

After the Army, Davis started a small newspaper in Virginia called The Metro Herald, for 30 years regularly publishing articles about the accomplishments of Black residents and local civil rights issues. During that time, he said in the interview, he gave little thought to why he had repeatedly run into danger in 1965 to save his men or why the medal nomination kept getting lost.

After some thought, he smiled and added, “I’m not a victim of anything. The other night, I tried to write down the things I’m a victim of. I couldn’t think of a thing.”