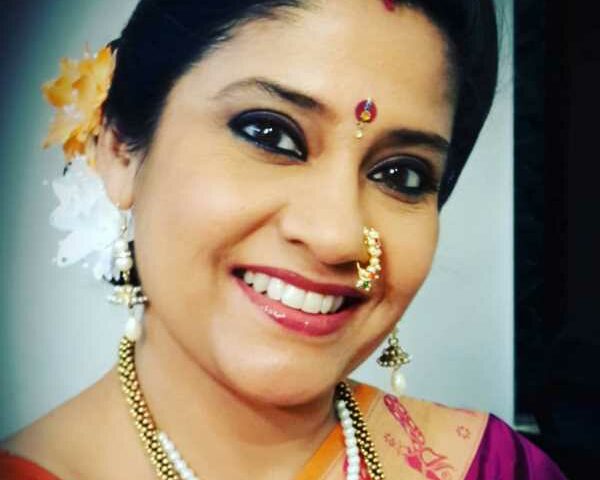 ‘A smile reflects your gratitude for life, your celebration of it.’

Even after three decades, her million dollar smile flashes bright and brings back a flood of nostalgia for Antakshari thanks to the recent CRED ad with Annu Kapoor.

We will see Renuka Shahane once again in a film, and this time it’s an anthology, Stories On The Next Page streaming on Disney+ Hotstar from May 6. Her story will see her share the screen with dear friend Rajeshwari Sachdev.

“My creative pace is that of a tortoise because I’m extremely critical… I want to be back in front of the camera. I miss that so much,” Renuka tells Rediff.com Senior Contributor Roshmila Bhattacharya.

What was it like reuniting with Annu Kapoor for an Antakshari session after almost three decades?

It was a magical day!

Even though the musicians and technicians were different, I was transported back in time.

Annuji and I were working together after a long time and there was so much catching up to do. I’d got married and became a mother after Antakshari, and he had two kids.

He wants to direct, I already have, so there was that creative journey to discuss too.

At the end of the day, we were sad to see each other go. The way he throws up his hands in delight and the smile on your face at the end, that hasn’t changed with time.

(Laughs) It was difficult to recreate that energy and I checked out some of the earlier episodes of Antakshari before we started shooting.

The biggest compliment we’ve received is that many think it’s a part of the ’90s shoot.

Sa Re Ga Ma Pa and Antakshari were among the first reality shows, Gajendra Singh (producer and director) having successfully married the Western reality show format with Indian content.

There was a sense of responsibility that comes from being a part of an incredibly popular show.

The main thing was to build a connect with Annuji, the participants and the audience which I focused on even during the ad.

Today, recruiters bring in the audience and everyone knows the business and what expressions to wear. But back then, their reactions were not prompted by the makers. They were always spontaneous.

If a song made us emotionally charged, we would see tears in their eyes too.

When we were enjoying ourselves, they would clap and dance too.

It was a natural progression of emotions and everything we did was impromptu, except for the songs at the beginning and the end, and the cue songs, which were pre-decided.

We had to have good command over language and knowledge of Hindi film playback. For me, Antakshari was a great learning experience, full of fun, laughter and sometimes tears. What has stayed in your mind after all these years?

The UK trip was memorable.

Annuji and I were missing home and the Indian Diaspora who made up the studio audience was very emotionally charged and whenever there was a song that reminded us of our country, there would be copious tears.

(Laughs) An article which appeared in a newspaper underlined that the tears were not scripted because otherwise people wouldn’t believe it.

After Antakshari, what was it like being a part of a reality show like Jhalak Dikhhla Jaa?

Very different, since I was not a dancer and was very inhibited.

I had to learn how to dance and perform before people.

It was a great experience, but Jhalak was not spontaneous.

The high points and low points were decided, you knew the paces, it seemed like just another acting job.

People were reading from teleprompters while during Antakshari, Gajendra and his creative team were there to support us, not impose anything on us.

That’s the difference I see in reality shows today and I missed the innocence. I guess that’s why today, even a child can predict the winner while in Antakshari, even you didn’t know what was going to happen next.

That’s true. Nothing was pre-decided.

Those who lost, lost.

Those who won, won, fair and square.

Another show that caught on in a big way was Surabhi. Any possibility of it returning?

No. It would be difficult because now you have niche channels for each of the things Surabhi represented.

Pioneered by Siddharth Kak, it was a bouquet of our art and culture, both past and present, helped along by an enthusiastic audience who sent us stories and stuff shot locally.

Today, following the digital revolution, everyone is a star in their own homes, making reels that showcase their talents. After Tribhanga, the 2021 film which you wrote and directed, you must have at least half-a-dozen scripts ready by now?

My creative pace is that of a tortoise because I’m extremely critical and unless I’m satisfied myself, I won’t even read out the first draft to my mom (eminent writer-journalist-critic Shanta Gokhale) or brother (Rhodes Scholar and writer-critic Girish Shahane).

Thankfully, one is ready. I want to be back in front of the camera. I miss that so much.

It’s a human drama; interpersonal relationships is a space I like to delve into and experiment with. Have you revisited Tribhanga since its release, felt you could have done some things better?

Every day. But while some things can be improve during patchwork, you have to draw the line at some point because you are spending so much money daily.

Some mistakes I hadn’t even seen were pointed out by the audience and you learn from them.

Fortunately, there are a million others only I can see, flaws staring me in the face.

What’s the best reaction you’ve got?

I’ve got so many mails and messages from people saying that they may be right about how they feel about their parents, but the forgiveness they learnt from Tribhanga has changed some relationships.

Sometimes it is too late to ask for forgiveness or even give it, like it happens in the film, but for some, there’s still time to accept and make amends.

I’ve also heard some disturbing stories of sexual abuse and am overwhelmed the film gave some the confidence to talk about this and see things differently.

There can never be closure, but there can be some kind of catharsis.

How long did it take you to write Tribhanga? You have two films releasing, Stories On The Next Page and First Second Chance.

Stories On The Next Page releases on Disney Hotstar on May 6.

Directed by debutante Brinda Mitra, they centre around acceptance, forgiveness, closure and restart.

My short Sunshower gave me an opportunity to work with a dear friend Rajeshwari Sachdev for the first time in the 30 years that I’ve known her.

It’s not a subject you’d expect from Raj and me, which made it interesting.

First Second Chance is a short film, produced and directed by Lakshmi Iyer, loosely inspired by a true story.

At certain times in your life, things don’t work out, then, in different circumstances, you might meet someone and things just fall in place.

In our country and culture, once you hit retirement age, many chapters are considered closed. But in this case, we are given a second chance.

It’s an empowering, feel-good film, and you don’t see these two old people crying all the time.

We have seen enough of that. You have the most loved smile in the business, a gift that makes other people smile.

(Laughs) Yeah, I still get reactions to it.

In the ’90s, it was rare to see people smiling on TV with even anchors, newsreaders and quiz masters all so serious.

During Surabhi, I got a lot of flak from those with a stiff upper lip who looked down on smiling people.

The perception was that those who smiled too much lacked intelligence, but I think Shakespeare’s most interesting character was the Fool who was anything but one.

A smile reflects your gratitude for life, your celebration of it.

Today, it’s considered a positive thing now, which is why I’m surprised when young people come up to me on the set and say, ‘Ma’am, your smile is so beautiful.’

(Laughs) Well, if it can make others smile, what’s not to like about it?

How difficult was the pandemic?

We, as a family, were grateful to be together. Even though we went through two bouts of COVID, we were well looked after and had means to help those who needed help.

It was a humbling experience. Whenever one sees you with your husband Ashutosh Rana, there is a sense of togetherness, of two people completely in sync…

That is the key, we are connected mentally and intellectually, to the extent that we feed off each other.

We are thinking, creative, people who are very compatible, have great respect for each other which is important because love can go up and down, even fade away, but respect carries a relationship forward.

Are your sons Suryaman and Satyendra interested in following you into the industry?

No. They are only interested in films as consumers and not keen on joining our industry. Whenever we see Madhuri Dixit and you together, there’s so much of positivity.

She carries the positivity in her and spreads it around.

Madhuri is an incredibly down-to-earth, professional, well-brought up girl.

I’ve seen people with not even a hundredth of her talent, get high on the smallest of stardom that can come from viral reels, while Madhuri carries it with so much grace.

She never makes anyone uncomfortable with her stature which she has achieved from sheer hard work.

I was relatively new to the industry when we did Hum Aapke Hain Koun…! and there was so much to learn from Madhuri, including how to carry oneself with grace, an art she aces. What do you remember of the film?

Soorajji‘s (Barjaya) direction, which is something I try to emulate today.

Like the way he was on the set every morning with his assistants before any of us arrived, his instructions to his actors, the fact that I’ve never heard him raise his voice, under any circumstances.

I saw the same humility and grace in Soorajji‘s father Raj Babuji and his mother despite them being in the industry for so long, their production house giving one hit after another.

I’ve learnt from them to keep striving to become a better version of myself. 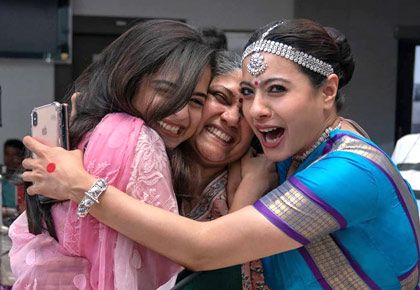