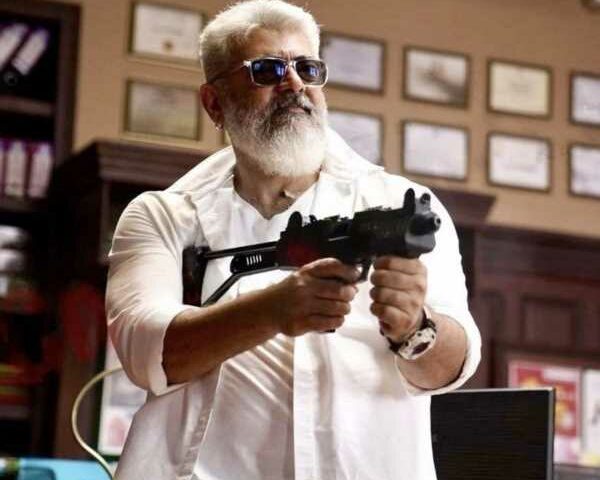 How long can you look at Ajith sitting with a machine gun on his lap? asks A Ganesh Nadar.

Thunivu means ‘guts’. When the movie title appears on screen, it’s followed by, ‘No guts no gain’.

The entire movie plays out in a bank.

What appears to be a heist to empty the bank vault turns out to be a convoluted plot to first defraud the bank customers and then launder the money to enrich the bank chairman.

Ajith carries the entire movie on his shoulders.

He appears with white hair and beard throughout the movie; there is no young Ajith even for a song and dance sequence.

The heroine Manju Warrier is not his love interest, but his sidekick in his endeavours.

She plays a computer whiz kid who can hack into any network of CCTV cameras.

Though the movie is mostly in the bank, there are helicopters, cars, speed boats and a huge container carrier ship that justifies the Rs 120 crore budget.

Samuthrakani, who usually produces his own movies and acts in them, plays the police commissioner. He plays his role with admirable restraint.

John Kokken, as a villain, is a total failure. Making scary faces and mouthing punch lines is not his forte.

Mahanadi Shankar, as the policeman who the hero likes, does his role well. His facial expressions are enough to send the crowd into rapturous laughter.

People, who are shot, don’t fall dead. They fly through the air and perform acrobatics before falling. Unbelievable!

The visual effects are not visible.

Cinematographer Nirav Shah is determined to focus the camera on Ajith, to the loss of all others who act in this movie.

H Vinoth’s story is interesting, and he describes the scam well: How bank employees use their credentials to dupe customers to invest their savings in a mutual fund. But how Ajith uncovers the plot is not explained.

He just happens to know about it and the entire movie is about how he recovers Rs 25,000 crore in cash (!!) and the investors get their money back.

There is no explanation, and certainly no punishment, for the number of dead bodies he leaves behind.

There are too many flashbacks and so the continuity of the story is not easy to follow.

After a while, the scenes in the bank get repetitive and boring.

How long can you look at Ajith sitting with a machine gun on his lap?

The theatre was full on the first day of release, and will continue to be so, as long as the fans want to watch it. But the public will not waste its time or money on this mediocre fare. 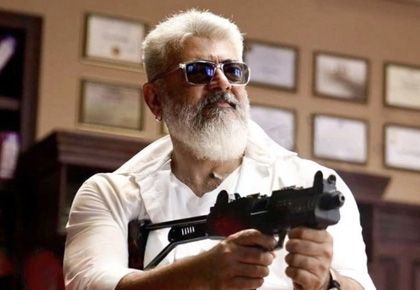