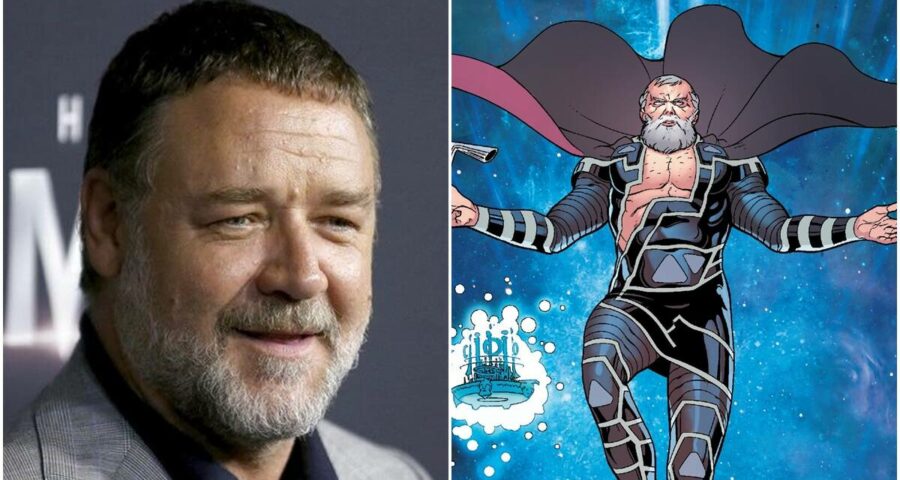 Russell Crowe was speculated to be a part of Thor: Love and Thunder when he was seen in a photo with Chris Hemsworth and his wife. Now, the actor has confirmed it and also revealed his character. Veteran actor Russell Crowe has revealed the character he is playing in the upcoming MCU movie, Thor: Love and Thunder. The movie, the fourth iteration in Thor franchise, is currently being filmed in Australia.

Crowe was speculated to be a part of the movie when he was seen in a photo with Chris Hemsworth and his wife.

While speaking to the Australian radio programme Joy Breakfast with The Murphys, Crowe not only revealed that he is playing Zeus, the Marvel character is based on the sky and thunder god of ancient Greek pantheon of the same name, he also said he is almost done playing his part in the movie.

“I’m going to get on my bicycle. I’m going to ride up to Disney Fox Studios and around about 9:15, I shall be Zeus! It’s for Thor. It’s my last day of Zeus-ing about, and I’m going to enjoy it,” he said.

Zeus in Greek mythology and in Marvel Comics are slightly different. While for ancient Greeks, Zeus was the supreme god and the ruler of Olympus, the abode of the gods. In Marvel Comics, he is a powerful humanoid called Zeus Panhellenios, who inhabits and rules the pocket dimension of Olympus.

It is not known how Zeus and Thor, who are both thunder gods of their own respective pantheons, will encounter each other, but it is certainly going to be interesting.

Apart from Chris Hemsworth, Natalie Portman will also don the role of Thor, and her character Jane Foster will wield Mjolnir. Tessa Thompson, Taika Waititi (who also returns as the director and co-writer) will reprise the roles of Valkyrie and Korg. The Guardians of the Galaxy members will also appear in the movie as Thor was last seen travelling with them in Avengers: Endgame. Jaimie Alexander will return Lady Sif from the first two Thor movies.

Jeff Goldblum is likely to return as Grandmaster from Thor: Ragnarok too.

Thor: Love and Thunder is scheduled for release on February 11, 2022.