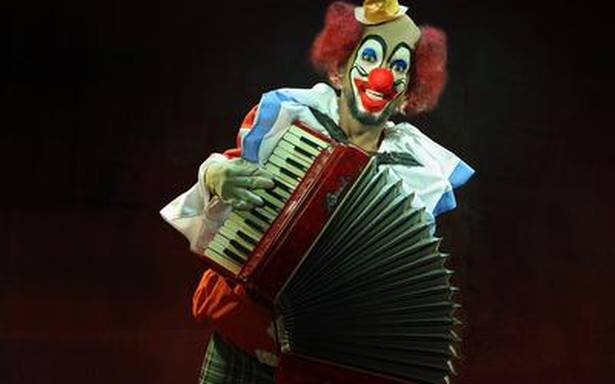 The minute he heard the word ‘Comali’, Tamil actor Sendrayan thought of all the memorable on-screen clowns he has seen. “I remembered English film Joker, Bhagyaraj sir in Rudhra and Kamal Haasan in Apoorva Sagodharargal.”

But when it came to the day of shoot, he forgot them all. “I posed as myself,” he says. Sendrayan, a familiar face among Tamil movie buffs, is thrilled about his latest photoshoot featuring him as a clown. The photoshoot features not only the actor and a bunch of props, but also a public awareness message about the need to be safe during the second wave of COVID-19.

The photos are the brainchild of Chennai-based photographer L Ramachandran, who, along with his team comprising creative director Vidya Balaji, costume designer Sukumar and make-up artist Ilangeshwari, set on a task: to make Sendrayan look unique. “We scouted to get some colourful costumes and props,” recalls Ramachandran, who recently worked with actor Vijay Sethupathi for a photoshoot.

In a bid to acknowledge the second wave of COVID-19, the team incorporated elements that would convey a safety message to viewers. “We are trying to say: the situation is bad outside, so do not be a clown and try to venture out unnecessarily,” he adds.

Sendrayan hails from Bodinayakkanur in Theni, and came to Chennai armed with a manjapai (a yellow bag used to store personal belongings) and lots of tinseltown dreams. “I remember the day I got down at the bus stand at Parry’s Corner wondering how I would make ends meet in such a big city,” he recalls.

Since then, Sendrayan did many odd jobs before landing up at director’s offices and working in various capacities. “I was a production helper for some time and then became a make-up assistant,” he recalls.

Stepping in front of the camera was a big step for Sendrayan whose first prominent outing was in Dhanush-starrer Polladhavan (2007). Since then, he has played a character artiste in many Tamil films, his most recent being Karthi-starrer Sulthan.

His participation in TV reality show Bigg Boss Tamil a couple of years ago gave him a shot at fame; Sendrayan believes that his latest ‘Comali’ photoshoot too will do something similar. The 38-year-old is currently in talks for half a dozen Tamil projects, one in Malayalam and Telugu, and will feature in TV dance show Jodi Number 1 as well.