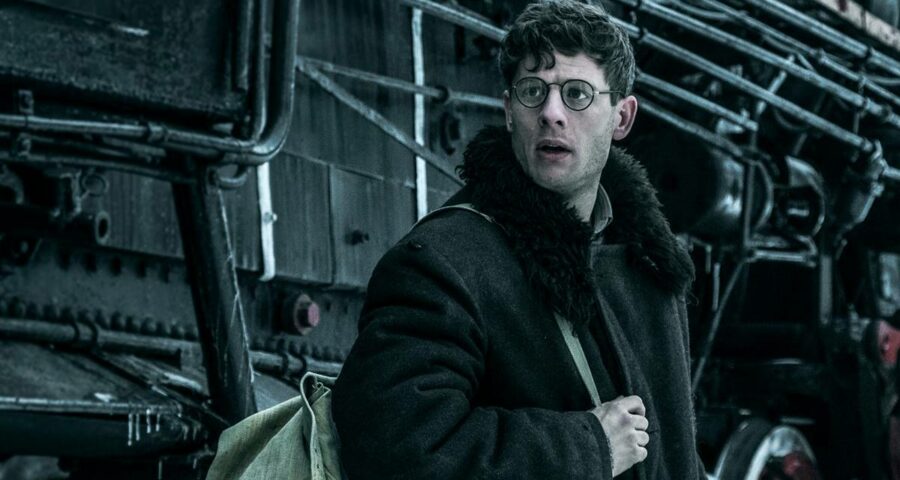 While there are plenty of popular films that talk about the Holocaust, not much has been discussed about Holodomor, one of the greatest man-made famine by Joseph Stalin, that swept across the Soviet Union in 1932-33. Influential novelist George Orwell once wrote, “In times of deceit, telling the truth is a revolutionary act.” That wisdom forms the underlying theme of Polish filmmaker Agnieszka Holland’s biographical drama Mr Jones (2019). The film opens with Agnieszka reimagining Orwell writing his classic cautionary tale Animal Farm sitting at the window in his room, which overlooks a barn filled with pigs. And why does Orwell consider pigs the cleverest among the animals? “Future is at stake, sir. Please read carefully between the lines,” writes George Orwell (Joseph Mawle) before he introduces us to Mr Jones, the owner of Manor Farm.

Cut to Gareth Jones (James Norton), an idealistic, curious and stubborn journalist, with an appetite for world affairs. The story is set in the 1930s, and he has already made his mark in the world of political affairs, thanks to his interview with Adolf Hitler. We see him trying to explain to a bunch of pipe-smoking, high-ranking, elderly politicians about Hitler’s ambition to conquer Europe. The way the well-dressed gentlemen mockingly laugh at Mr Jones’ well-informed prediction tells volumes about how dull, lazy and unimaginative policymakers have wrought great tragedies upon mankind down the ages. And if you can read between the lines, by now you know what is the greatest challenge of Mr Jones: nobody listens to him or believes in what he has to say.

Mr Jones is now bugged by a very simple question — where is the Soviet Union is getting the money to fund its ambitious and expensive industrial expansion? It seems nobody other than Mr Jones is interested in asking this question. Maybe because world leaders are not willing to look under that rock in fear of what they might discover. And why is that?

Mr Jones is an important film that reminds us why any form of totalitarianism is a bad idea. It could be Hitler’s Nazism or Stalin’s Communism (or the pigs’ Animalism in Animal Farm), they have all caused unimaginable pain and suffering to the human race. This is also an important film for another significant reason. While there are plenty of popular films that talk about the Holocaust, not much has been discussed about Holodomor, one of the greatest man-made famines wrought by Joseph Stalin’s policies, which swept across the Soviet Union in 1932-33.

Mr Jones is not a documentary made for History Channel. So, Agnieszka has adopted a very mainstream narrative approach for this film. It feels like a detective story set in the visual style of Guy Ritchie. The images evoke a sense of sheer excitement about Mr Jones’ adventurous journey behind Stalin’s iron curtain. Unlike usual World War movies, the film is not replete with images of bloody violence or firing of big guns. And yet, you can feel in your gut the depths of violence and cruelty that greedy and vindictive men are capable of.

Mr Jones is streaming on Mubi.